The Alexander “Boss” Gibson Home is designated a Local Historic Place for its association with the Gibson family, 185 Canada Street was built by Henry Pickard in 1864 for Alexander “Boss” Gibson, local entrepreneur who made his fortune in the lumber industry and is credited with the industrial development of the former town of Marysville, now part of the City of Fredericton. Gibson lived in the home until 1866, at which time he built an ornate mansion in the area known as “Nob Hill.” Atop “Nob Hill,” Gibson had a view of the Nashwaak River, his cotton mill, and the numerous tenement homes he constructed for his employees and their families.

The significance of this home also resides in its location on Canada Street. When Gibson purchased Rankin’s Mill in 1862, the sale included a grist mill, a blacksmith shop, a supervisor’s cottage, a store and several homes for the workmen. As Gibson’s own home was constructed, so were twenty additional houses for his employees along Canada Street. These homes marked the beginning of the community building boom which lasted for nearly two decades.

The original Gibson Mansion was known as “the big house” by the locals of Marysville and was built in the 1860’s.

Mrs Gibson worked closely with architect Matthew Stead (who also designed the local church) to achieve a Gothic Victorian look. A ballroom ran the entire length of the house and a circular staircase rose to the third floor. There was even a marble fountain on the grounds. 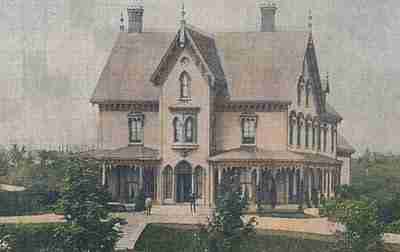 Mrs. Gibson would entertain people in the magnificent parlors and spacious grounds and the evenings would sometimes end with fireworks. The Fredericton Brass band played at several events. Guests included Prime Minister John A. MacDonald and the Lieutenant Governor would bring special visitors by to visit.

On Saturday afternoon, June 6, 1914, the house burned to the ground. Crowds gathered and watched as this landmark of the late Boss Gibson was destroyed.