Benedict J. Murdoch was born in Chatham in 1886, the son of Robert A. Murdoch and Mary Allen. Murdoch received his higher education at St Dunstan’s College (1904-08) and was trained for the priesthood at the Grand Seminary in Quebec. His ordination in 1911 was followed by several short-term assignments, including a year as curate at Newcastle.

Benedict Joseph Murdoch, better known as Reverend B.J. Murdoch, was a priest and novelist. He is probably best known for his book “The Red Vineyard” (1928), which was a memoir of his time spent in the First World War as a chaplain. Murdoch’s work inspired other priests to model their ministries after their own experiences during the Great War. During his life, Reverend Murdoch was called the “Shepherd of the Woods,” a title now etched on his tombstone. 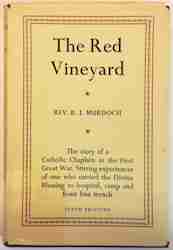 After his ordination, Reverend Murdoch served as a priest mainly in New Brunswick, although he did spend some time in Baltimore, Maryland in 1914. It was also this year that his creative work was first published with a short story appearing in Rosary magazine. In 1915, he enlisted as chaplain to the 132nd North Shore Battalion, a unit in the Canadian Expeditionary Force during the First World War. The battalion sailed to England in October of 1916.

During the war, Reverend Murdoch was able to carry out his duties as chaplain by carrying with him a “portable altar,” as he described it in The Red Vineyard:

“After a few days a box about one foot and a half long, one foot high and nine inches wide, arrived. It was made of wood covered with a kind of grey cloth, with strips of black leather about the edges and small pieces of brass at every corner. There was leather grips on it so that it could be carried as a satchel. It was my little portable altar, containing everything necessary for saying Mass. One half opened and stood upright from the part containing the table of the altar, which when opened out was three feet long. Fitted into the oak table was the little marble altar-stone, without which one may not say Mass. In the top of the upright part was a square hole in which the crucifix fitted to stand above the altar; on either side were holders to attach the candlesticks. From the wall that formed a compartment in the upright portion, where the vestments were kept, the altar cards unfolded; these were kept in place by small brass clips attached to the upright. Chalice, ciborium, missal and stand, cruets, wine, altar-breads, bell, linens, etc., were in compartments beneath the altar table. The whole was wonderfully compact and could be carried with one hand.”

Benedict J. Murdoch’s time in the war was spent giving advice, inspiration, and hope to young soldiers who seemed to have lost their way, and by the end of the war he had served in France, Germany, and Belgium. He would later give words of wisdom to another young priest and writer from New Brunswick, Reverend R. Myles Hickey. As Hickey described in his own book, “The Scarlet Dawn” (1949), Rev. Murdoch was instrumental in encouraging his enlistment in World War II: “Yes, go Father Raymond; you will make a good chaplain; and if you are killed, well you’ll save your soul”.

After the war ended, Reverend Murdoch returned home to New Brunswick where in 1919 he served as a pastor at Jacquet River, in Restigouche County, and Douglastown (now known as Miramichi) where he remained from 1921 until 1930. At this time, he developed combat stress reaction or shell shock. He retired from his pastoral duties and the ministry in 1932, as recommended by his doctor. It was then that Father Murdoch secluded himself in a cabin in the woods of Bartibog, ten kilometres east of Chatham, where he lived for almost thirty years. It was during this time of seclusion that Murdoch wrote the majority of his books, including “Part Way Through” (1946) and “Far Away Place” (1952), two spiritual successors to the autobiographical “The Red Vineyard”. According to Father Leon Creamer, who is presently (2009) writing a book on Murdoch, the only payments he received during his years in Bartibog were the two dollar Mass stipends for each day he celebrated Mass, and also money from selling his books, as he was not in the army long enough to receive a pension. All of his books were written in longhand during this time because he had no typewriter.

On 29 April 1971, two months short of the 60th anniversary of his ordination, Reverend B.J. Murdoch was made a Monsignor by Pope Paul VI, receiving the title of “Honorary Prelate to His Holiness.” Murdoch spent the remaining years of his life at Mount St. Joseph Nursing Home in his hometown of Chatham. On 31 January 1973, he died at Hotel-Dieu Hospital in Miramichi at the age of 86.

Reverend Murdoch left behind a legacy as one of the finest writers of faith pastoral in Canada. His major influences were authors Agnes and Egerton Castle, whom Murdoch had met and stayed with in England.

Murdoch enjoyed some critical success with his writing. Fred Cogswell describes his memoirs as substantial wartime narratives, saying they “more than compensate for their lack of action by the picture they give of the unique mind of their creator”. “The Red Vineyard” in particular was highly successful, both well received by critics and popular with readers. It went through nine editions during Murdoch’s lifetime. “Alone With Thee” (1963), a book of religious readings, also went out of stock frequently and had to be reprinted. Perhaps it is fitting then that the title of his final autobiographical work, “Far Away Place” (1952), refers with some measure of solace to how he was distanced from the rest of society.

Along with his memoirs, Reverend Murdoch also wrote novels, such as “Souvenir” (1928) and “The Menders” (1953). These were not as popular nor critically acclaimed as his non-fiction work, however. The same could be said of his collections of short stories, “Sprigs” (1955) and “The Murphy’s Come In” (1965). His readers demanded the more immediate social realism of his eyewitness accounts.