In 1855, Ronald Campbell began a business that would last for nearly 100 years: the Campbell Carriage Factory. Located in Middle Sackville, this family business thrived in a small but prosperous university town. Until 1949, when the Factory finally closed, the Campbells served their community as honest, dependable carriage-makers.

Originally built as a tannery in 1838 by John Beal, the structure was purchased and converted into a carriage factory in 1855 by the Campbells. For the next century, the Factory produced high-quality horse-drawn vehicles, tools, agricultural equipment, and caskets. Subsequent generations would branch out into both hay dealership and undertaking. 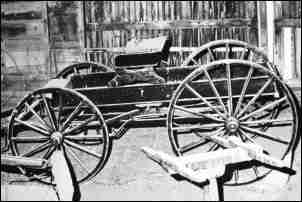 The Campbell Carriage factory building is a two storey post and beam construction, measuring 70 x 30 feet. It consists of four separate rooms, two per floor: The Woodworking and Machinery Rooms on the first floor, and the Storage, Assembly and Paint Rooms on the second floor. Numerous original artifacts from each of these rooms are now part of the museum’s collection.

In its early stages, an overhead belt system which conveyed power to each of the work areas was driven by one or two horses. Later this “horse-power” system was replaced by a gas engine.

Not long after the factory opened a blacksmith shop was constructed on the south side of the main building. Its two forges produced all the custom-built metal components needed in the manufacture of sleighs, wagons and carriages. See further Blacksmith Shop . 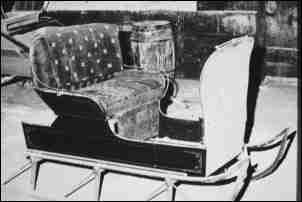 In 1905 an old Baptist meeting house was purchased and attached it to the east end of the main building providing space for finishing and trim work, and the addition of a large hand-operated freight elevator.

The popularity of automobiles finally pushed the Factory to close its doors and the two remaining employees set their tools down upon their workbenches and ‘locked up’ as they would at the end of any other working day. Their tools, along with many other pieces, remained relatively un-disturbed until 1998 when William and Barbara Campbell donated the old factory to the Tantramar Heritage Trust, thus saving the building from demolition.