The Canadian National Railway Station is a one-and-a-half-storey, sandstone railway station, built in 1907-1908. It is located at the base of a gentle hill, on the edge of the Tantramar marshes, on the southern outskirts of the town of Sackville. 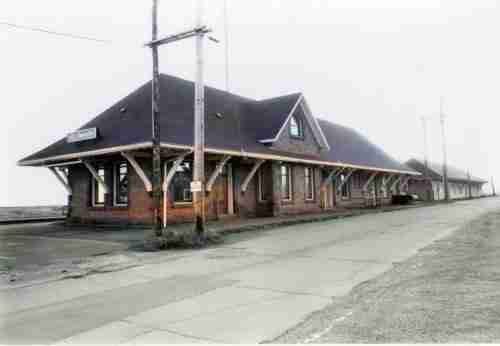 The present station affirmed the key role of the ICR in Sackville’s economic development, and supported the community’s agricultural and manufacturing industries.

The Canadian National Railways Station typifies turn-of-the-century ICR stations in its generous scale and stone construction. One of only three surviving stone stations in Nova Scotia, it is distinguished by its rich textures and colouration. Its use of local sandstone is consistent with local building practices.

The station retains is relationship with the rail yard and related structures, including: vestiges of a heavy, timber platform with double tongue-and-groove flooring along the street elevation; a wood-frame freight shed; the railway tracks; docks; and nearby industrial buildings.