The Cathedral in Moncton is an Acadian monument to the Blessed Virgin and is built on the foundation of the chapel crypt of the Our Lady of the Assumption parish founded in 1914 by the Very Reverend Henri-D. Cormier, first parish priest.

On February 22, 1936, Pope Pius XI created the Archdiocese of Moncton. Its first titular, Bishop Louis-Joseph Arthur Melanson, then bishop of Gravelbourg, took possession of the new diocese the following year. Bishop Melanson would announce to diocesan parishioners on January 9th, 1938, his determination to build a Basilica-Cathedral in Moncton that would become a Marian sanctuary.

Construction of the Cathedral began on April 24, 1939. An architect from Sherbrooke, Quebec, Louis-Napoleon Audet was given the task of drawing up the plans for the religious building. Ambrose Wheeler, a local construction firm was granted the contract to build the cathedral.

Two months later, on June 13th, Bishop Melanson presided at the benediction of the new building’s corner stone. This ceremony coincided with the royal visit to Moncton of King Georges VI and Queen Elizabeth.

The exterior as well as the sacristies, the lateral chapels, the apsidal chapels, the sanctuary, the transept, the vault and the floor of all three naves were completed by the fall of 1940. The official inauguration of the site took place on November 21, 1940 with several dignitaries in attendance including the primate of the Church in Canada, Cardinal Jean-Marie Rodrigue Villeneuve, then archbishop of Quebec who presided at a pontifical mass and gave a fitting sermon for the occasion.

On the eve of this ceremony, Archbishop Melanson, assisted by Bishop Patrice-Alexandre Chiasson, bishop of Bathurst and Bishop Patrick Albert Bray of Saint John had blessed the new church and consecrated the altar.

In 1954, coinciding with the festivities surrounding the bicentennial of the Acadian Deportation, the finishing work was done on the interior naves, installing the pews and the organ, stained glass in the naves as well as the stations of the cross. The Very Reverend Norbert Robichaud, second archbishop of Moncton, presided at the inauguration of the building which was practically completed at this time.

Finally, in 1975, extensive renovations were made to the interior of the Cathédrale Notre-Dame de l’Assomption including finishing the vault, the creation of the Archbishop Melanson chapel, installing a new lighting system as well as transforming the old sanctuary into a baptismal chapel. The costs associated with the archbishop’s chapel were paid by the congregation ‘Filles de Marie de l’Assomption’ in honour of their founding father.

During these renovations, the remains of Bishop Henri-D Cormier, first priest for the parish and those of Archbishop Norbert Robichaud, second archbishop of Moncton, were buried in two alcoves at the back of the sanctuary. Archbishop Donat Chiasson, third archbishop of Moncton presided the opening ceremonies for the newly renovated cathedral and blessing the ‘Bishop Melanson’ chapel.

Our Lady of the Assumption Cathedral is situated at the corner of St. George and Lutz streets. This neo-gothic style religious building is a cruciform structure made of sandstone and boasts a square steeple.

The interior as well as the exterior of the church are built entirely of stone from a quarry in Shediac, a small municipality situated approximately 20 kilometers from Moncton. Originally, the vaults in the three naves were made from Italian volcanic stone which was reduced to powder and reconstituted upon arrival using small amounts of cement. This material arrived just one month before war was declared in August 1939.

The religious building measures 74 metres (246 ft.) along Lutz Street and 27 metres (90 ft.) along the façade on St. George Street. An additional wing measures 56 metres by 18 (186 ft. by 60) made up of annexes, some of which are four stories high. The stone tower at the front of the building is 67 metres (223 ft.) high and is topped by a golden copper cross measuring 3 metres (10 ft.) in height.  At first glance, when seen from the front, it resembles a huge monument. The architect planted an immense cross 30 metres (100 ft.) long on each side of the tower.

On the exterior, above the entrance doors are sculptures representing the coat of arms for the archdiocese at the centre, those of Pope Pius XI to the left and those of Pope Pius XII to the right. A bit higher are sculptures of the four evangelists: saint Matthew, saint Marc, saint Luc and saint John carved into the pilaster. Each sculpture is 4 metres (13 ft.) tall. In the tower, the sculpture of the Virgin measuring 4.5 metres (15 ft) and weighing 725 kilograms (6,000 lbs) is flanked by two angels measuring 5.4 metres (1 ft.). These pieces were all sculpted here by the artist Sebastino Aiello of Quebec.

Two vestibules, one exterior is enclosed by iron grillwork, the other, interior contains two small rooms separated from the main area by glass walls that are protected behind iron grillwork. 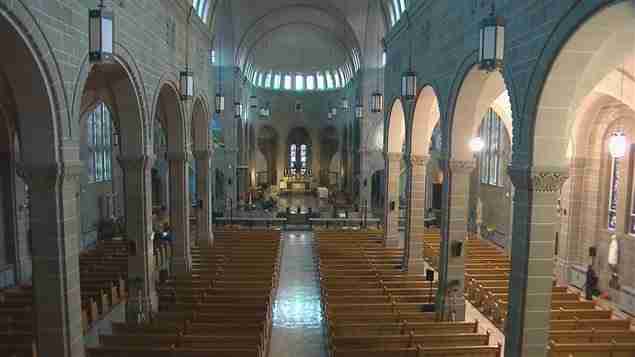 The flooring is all made of ceramic tiles imported from Belgium. The tiles in the basement are red and yellow and on the main floor of the church, the sanctuary, the chapel and the sacristies, the floors are grey and yellow marble tiles. The stairs leading to the communion table and to the chapels are of green marble from Italy and black marble from Belgium. All of these tiles combined cover a surface of 16,800 square meters (63,000 sq.ft.).

The fourteen stations in the Way of the Cross are made of enamel mosaics from Venice and gold mosaic. Pierre Gaudin, a Parisian painter and mosaic artist completed this work of art.

Each column’s capital is graced with a different sculpture. The capitals in the choir loft have religious symbols while those in the transept and the nave depict the natural resources as well as local industries and trade. All these sculptures were made by young Acadian artists.

Both statues in the nave are by Claude Roussel, a well-known Acadian artist who also created two mosaic murals in 2006. One of the murals depicts the patron saint of the Micmac and their close ties with the Acadians. The other is of the mysteries of the rosary.

A border of maple leaves adorns the stone wall which separates the nave from the lower choir. The coat of arms as well as the dates when the Acadian college and the teaching congregations were founded are inscribed on this stone wall.

The sanctuary lamp measures 1.2 metres (4 ft) high by 85 centimeters (34 in.) wide and is constructed of golden copper and cast iron as are all the other lamps. It has an octagonal shape and each face is covered with pewter bas-reliefs depicting scenes related to the Eucharist.

The communion table is made of green-veined white marble while the base and posts are of black marble from Belgium. Between each post are pewter bas-reliefs on copper panels. Each panel represents one of the fifteen mysteries of the rosary. The sixteenth panel, however, depicts the Virgin’s visit to Bernadette.

The Cathédrale Notre-Dame de l’Assomption contains six altars made of marble imported from Italy, France, Belgium and Greece. All of the altars are dedicated to the Virgin Mother. The master altar contains a massive copper tabernacle which is held aloft by two kneeling angels. The altar’s façade is made of Brazilian onyx as well as the ambo which serves as the pulpit.

The baptismal font is made of marble and has eight bas-reliefs depicting the baptism of Jesus and the seven sacraments and the cover is made of copper. The six stained-glass panels all show symbols related to the Virgin Mary. At the back of the chapel is the altar where Bishop L.-J.A. Melanson is buried.

The great organs were installed during renovations in 1955 and are the work of Casavant & Frères of St-Hyacinthe, Quebec. The organ has 85 stops with four keyboards. There are 5,176 pipes, the longest one being 10 metres (32 ft.) tall and the shortest is a mere two centimeters (one inch).

The Cathédrale Notre-Dame de l’Assomption stained glass is rich in symbolism. The stained glass in the sanctuary are situated behind the master altar with one showing the archdiocese coat of arms and the other, the late Bishop Melanson. Both apsidal chapels contain stained glass of the four evangelists on each side of the altar.

At the entrance of the baptismal chapel, one stained glass panel depicts the late Bishop Edouard-A. LeBlanc, the first Acadian bishop’s coat of arms. On the other side, where once stood the entrance to the nuns’ chapel and which is now the children’s room, are the coat of arms of Bishop Chiasson of Bathurst. All of these stained glass panels are antique glass and were made by M. St-Pierre of Montreal.

The stained glass in the transept are the work of a French artist, A. Labouret and summarized the history of the Acadian people from the first settlement in Port-Royal. The stained glass in the nave try to demonstrate how the Virgin Mary was announced in the Old Testament. Jesus the Messiah was also predicted, not only by the prophets but also by the actions and lives of the ancient patriarchs, the prophets and other characters in the Old Testament. Interestingly enough, the Virgin Mary was announced by women in the Bible. In fact, she is symbolically represented all through the history of the Hebrews by the likes of Rebecca, Rachel, Ruth, Moses’ sister Mary, Judith, Ester, Abigail and the mother of the Maccabees.  Each stained glass is composed of two distinct parts. The first part shows characters of the Old Testament and the second part shows the corresponding mystery in Mary’s life.

Each part also states from which scripture this character is known and how Mary is represented.

Our Lady of the Assumption statue:  This statue of the Virgin is the second one ordered from Italy because the first one never arrived at it’s destination. It seems that the ship carrying the statue sank during the First World War.

The statue is carved from a single piece of marble which was stained using a special process. It was unveiled during festivities surrounding the bicentennial of the Acadian people in 1955.

Bishop Melanson’s chapel:  This chapel holds the remains of Bishop Louis-Joseph-Arthur Melanson, first archbishop of Moncton. In honour of their founder, the Sisters of Mary of the Assumption paid the entire cost of refurbishing this chapel. The altar in the baptismal chapel is where Bishop Melanson’s remains are buried.