The Parish of Maugerville was founded in 1783. Christ Church Anglican was built in 1856. 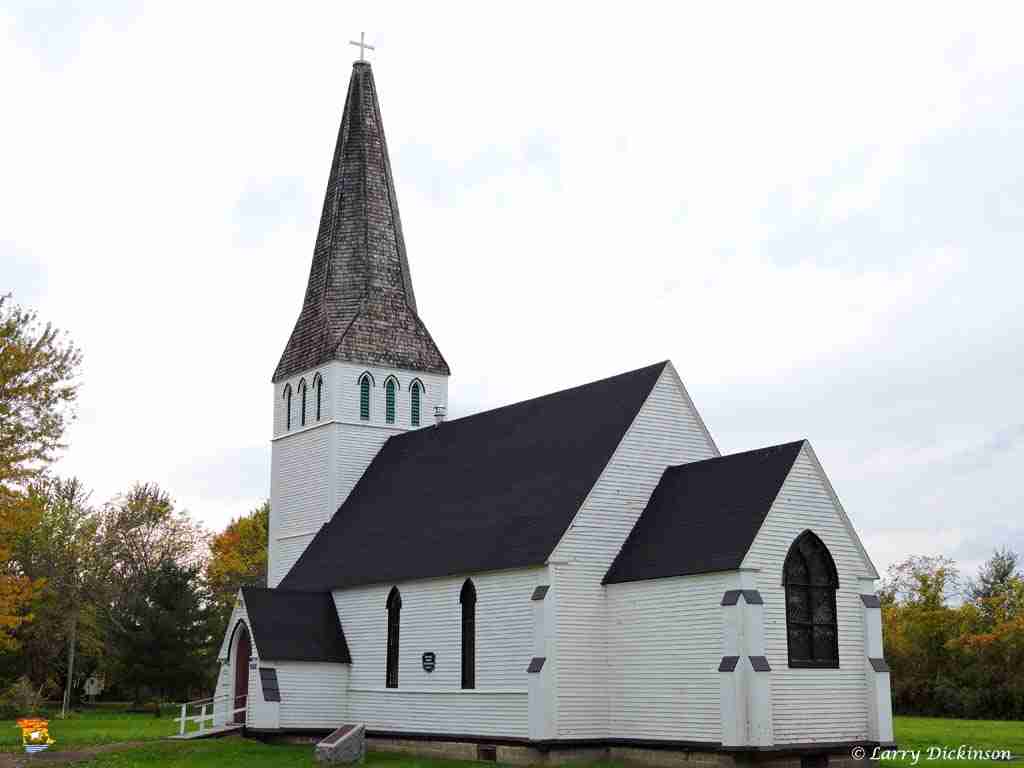 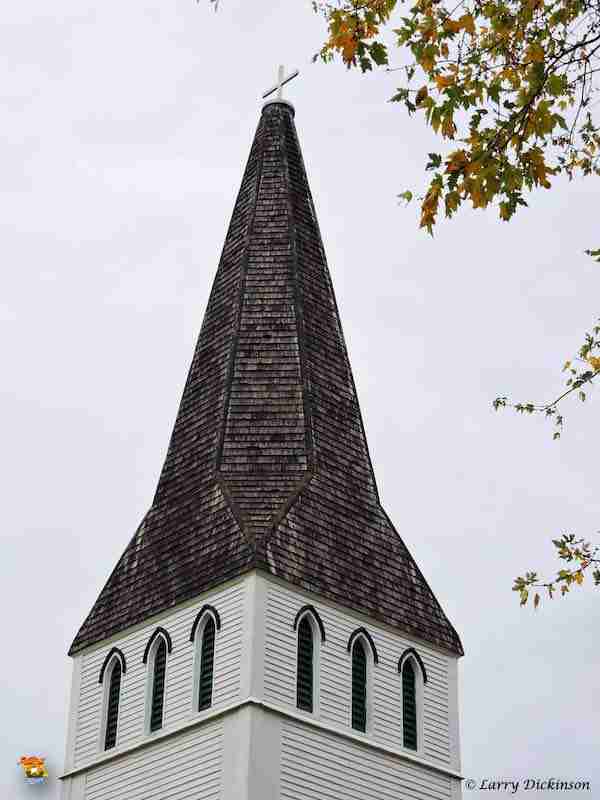 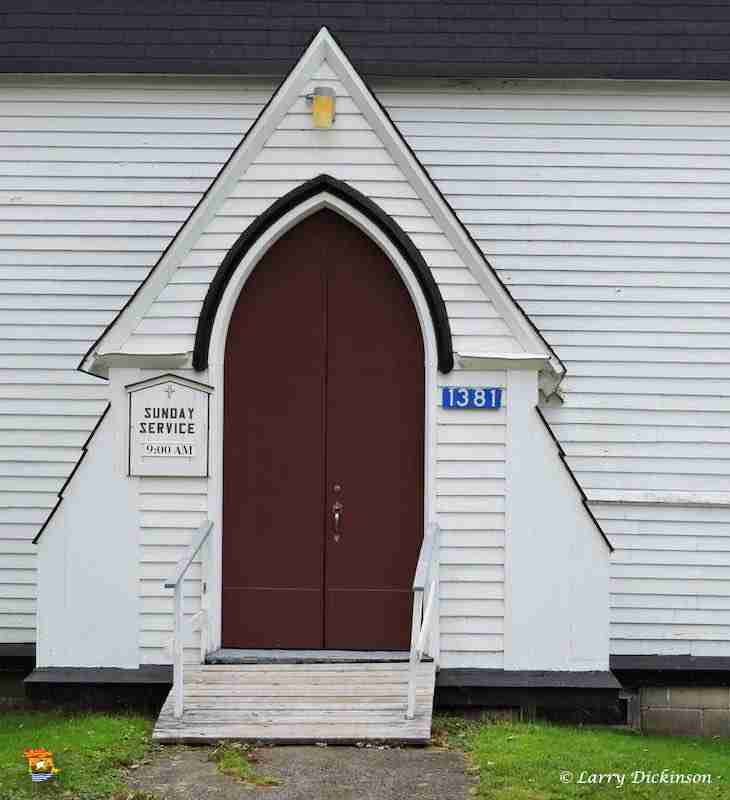 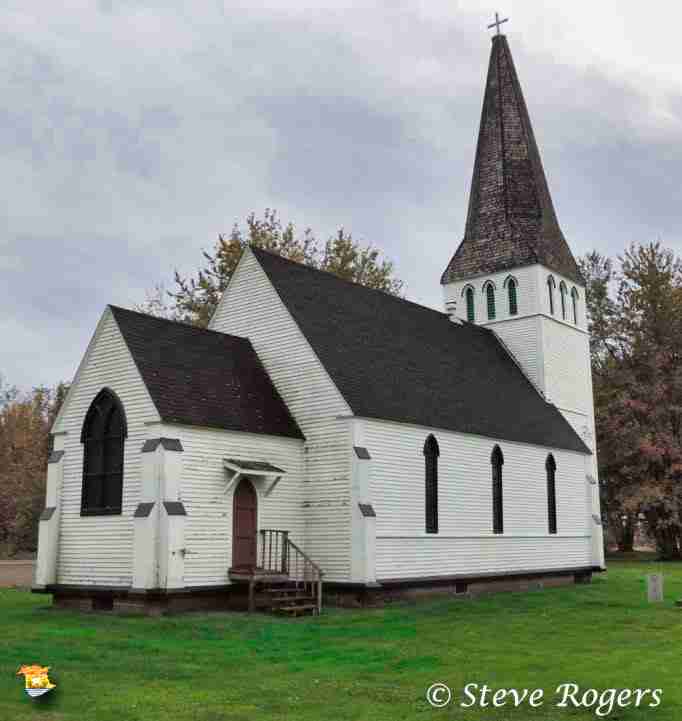 The cemetery at the church contains the graves of some very notable people. 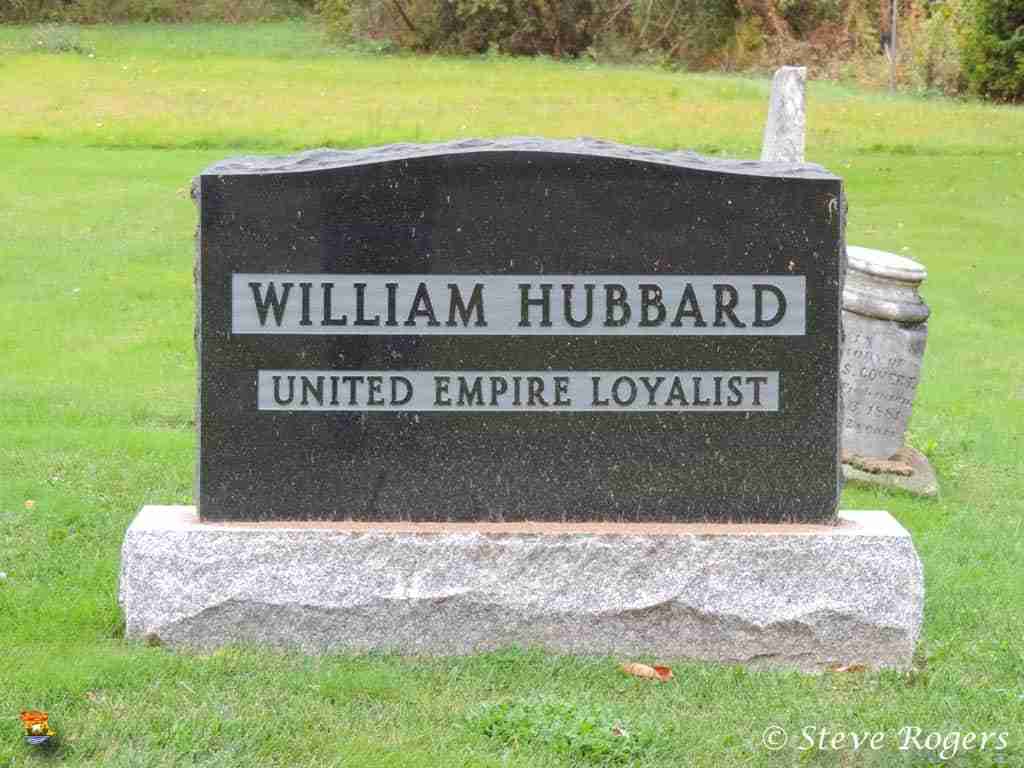 William Hubbard (1751 – 1813) was a farmer, lawyer, judge and political figure in New Brunswick. He represented Sunbury in the Legislative Assembly of New Brunswick from 1785 to 1792.

Hubbard was the son of Nathaniel Hubbard and Mary Quintard.

Hubbard, a United Empire Loyalist, came to New Brunswick from Stamford, Connecticut in 1783. He settled in Burton, Sunbury County. Hubbard was registrar of deeds and wills and chief justice for the Court of Common Pleas in Sunbury County.

John Mersereau was born in 1735 and was a native of Staten Island. 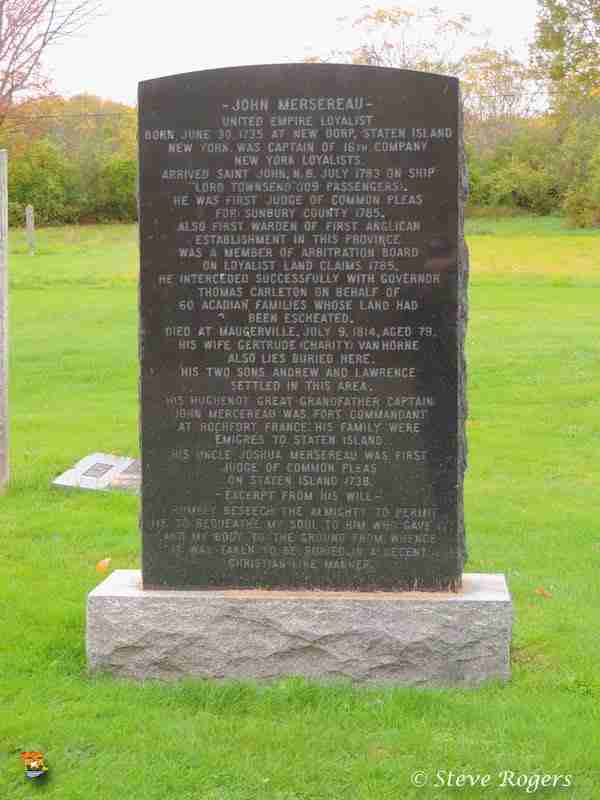 John Mersereau married Charity (Gertrude) Van Horne circa 1755 and they had a family of five boys: John, Lawrence, Jacob, Andrew and David. There were many Mersereaus in the New York area and they all descended from Daniel or Joshua Mersereau, brothers who came from France to New York via England circa 1688. Several of John’s cousins were American Patriots and included spies for General Washington.

John Mersereau was a Loyalist and took refuge in New Brunswick. It is only from this point when he was 48 years of age that much is known of his life.

John became Captain of refugee Company 16 which evacuated New York for Parr Town at the mouth of the Saint John River in July of 1783 aboard the Lord Townsend.

Upon arrival, John went up river to Maugerville and bought half of lot 93 opposite the head of Middle Island from pre-Loyalists Stephen and Francis Peabody. Mersereau was one of the first Loyalists in Maugerville indicating how active and busy he was in establishing himself then, and during the next couple of years.

John received a grant of land in Dipper Harbour during the summer of 1784, but relinquished it in February of 1785 with the intention of joining Captain Ford’s group. In the meantime, he joined a group led by Dr. Joseph Clark and did not pursue the idea of also working with Captain Ford. Groups such as this wanted to establish whole settlements and hoped that their leaders, such as Ford, Clark and Mersereau, would be rewarded with larger than normal grants in return for their entrepreneurial contributions to the colony.

John Mersereau and Joseph Clark spent the summer of 1784 exploring the Oromocto River for a likely settlement site. The competition for land around Maugerville was fierce but the upper Oromocto had only a few squatters and was a good place to try to get an early grant with little opposition.

Mersereau and Clark assembled a group of ten other men to join their venture and, in February of 1785, they filed their petition to government. Mersereau and Clark complained that they each lost land amounting to £2000 due to the Rebellion and that they could not recover any of this because it was too late to make a claim to London. Furthermore, they still had no grant of land and their circumstances had become ruinous and unhappy. They proposed that, if their group were given grants, they would promote the construction of a road between the upper Oromocto River and Carleton (West Saint John). This would draw settlers to remote areas and therefore be of benefit of the colony. In view of these benefits they asked for grants of 500 acres for each family man in the group and 300 acres for each single man

Council ruled that the usual maximum grant of 200 acres per man must apply, and that Mersereau and Clark’s request was therefore excessive. It is interesting that Mersereau had claimed that he still had no grant of land. He had bought a lot in Maugerville and had relinquished a grant in Dipper Harbour.

Mersereau likely spent the winter of 1784-85 in Maugerville.

Mersereau and Clark asked permission to survey lots in Blissville. This was in June of 1785 and grants of around 200 acres each were quickly made to them and their group which included Mersereau’s sons Lawrence and Andrew, plus Enoch Gearish, William Scobey, Peter Fick, Richard Rogers, Daniel Smith, Joseph Mundy, John Bedell and Nathaniel Hubbard. Reservations were also made for a school lot and for a glebe lot.

John eventually left the Oromocto and returned to his lot in Maugerville where he would spend the rest of his life. He was a farmer.