When Fredericton was incorporated in 1848, City Council had the authority to build a City Hall and install a public clock. After fire destroyed City Hall in 1875, the design plans for its reconstruction included a clock. However, when the new City Hall opened in 1876, there was no clock.

When Mayor George Fenety came to office in 1877, he was committed to providing a clock without taxation. While a “Clock Fund” had been established, it was only after Mayor Fenety agreed to donate his salary and the honoraria paid to the City Revisors that work could begin on installing the clock. After consulting with local watchmaker, James White, the City purchased a clock from Gillett and Bland clock and bell manufacturers in England. The clock was manufactured under the direction of Sir Edmund Beckett, parts of which would serve as the prototype for London’s famous, Big Ben. The clock arrived in April 1878, and Thomas Ross placed it in position. The clock struck for the first time at noon on May 1, 1878. Successive mayors followed Mayor Fenety’s example of donating their salary until the clock was fully paid for in 1888.

In 2006, after almost 130 years of service, the clock was in need of repair. Research was carried out to identify companies specializing in tower clock restoration. In January 2008, City Council commissioned the Balzer Family Clock Works of Freeport, Maine, to restore the historic brass and iron clock mechanism. As part of the restoration, it was decided the clockworks would be relocated from the clock tower to the lobby area outside Council Chamber. In May 2008, the clock was dismantled and shipped to Freeport for repairs. After a year of patient and persistent restoration, the clockworks returned to City Hall in June 2009. 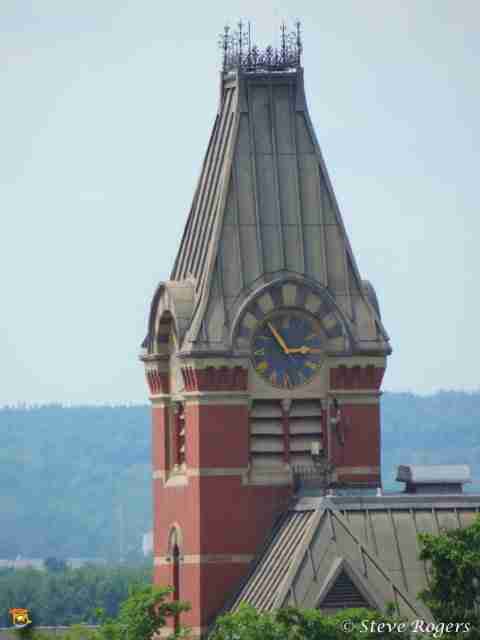 The City Hall Clock Tower timepiece is weight driven, using gravity as its power source. The weights slowly descend from the ceiling to the floor, driving the gears of the clockworks as they drop. While the clock weights were once hand-wound every two days, they are now wound by an electric motor. The timepiece is pendulum regulated, meaning the pendulum makes a complete swing every two seconds, driving the escapement. The escapement is the part of the clockworks that allows the clock to keep time. The clockworks then drive shafts that make the clock hands move and the hour bell ring.