Connell House, situated at 128 Connell Street, Woodstock, is a Greek Revival edifice, built in 1839, as the residence of the Honorable Charles Connell (1810-1873). The house is reputed to be an exact replica of a house Mr. Connell had seen in the Hudson Valley, New York. A prosperous merchant and timber dealer, Mr. Connell filled his home with quality furnishings, and here, he and his wife, the former Ann Fisher, raised their family. 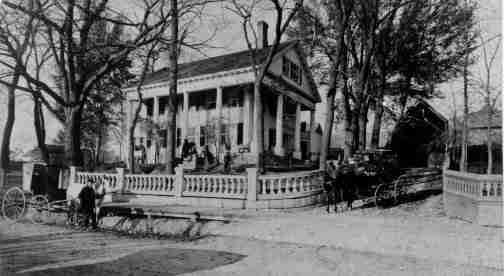 When construction commenced, and finished, is presently unknown. It appears that it had been completed and the Connell family was in residence early in 1839, as indicated by the following paragraph from the Saint John New Brunswick Courier of 6 April, 1839, reporting on a visit by the New Brunswick Lieutenant-Governor, Sir John Harvey, to Woodstock:—

“During the week His Excellency has every day entertained in his never failing hospitable manner the principal inhabitants of the neighbourhood and officers of the garrison; and on Thursday held a Levee at his temporary headquarters at Mr. Connell’s, at which it was gratifying to see Major Kirby and two other American Officers from the garrison at Houlton.” 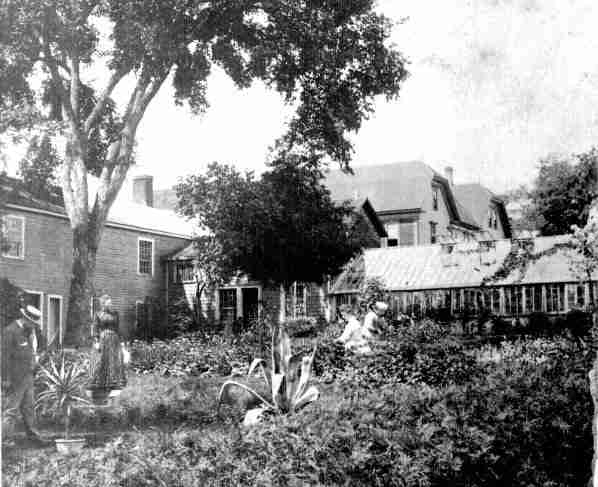 A smaller dwelling on the grounds, a saltbox structure, may have served as a workshop, or perhaps a residence for the master builder. It was merged into the main house as the beginning of the West Wing. That wing can be seen in the undated photograph of the Connell greenhouse and garden, below.

Charles Connell died in 1873. His wife, Anne, died in 1895. The two eldest daughters, Ella and Alice, remained single while their mother lived, marrying in 1896 and 1897 respectively. Thereafter, the house suffered a variety of alterations and passed through a series of owners. It was converted to a double tenement circa 1898, when the east wing was added. The west half of the house was occupied by Fred B. Greene of the Maritime Pure Food Company, while Frank C. Denison, the United States consul, lived for a time in the east section. The house was further subdivided into three apartments circa 1920, with a fourth apartment created about 1960. These modifications included opening a new entrance on the south (Connell Street) side; a second stairway leading to the second floor, and kitchen and bathroom facilities in each unit.

Connell House was purchased by the Historical Society in May of 1975, which perhaps spared the building from demolition. A year later, Connell House was declared a National Historic Site, although the plaque bearing that designation was not installed until 1979. The house has served as the headquarters of the Historical Society, providing office space and room to house both the document archives and artefact collections.

Fall on the Saint John River