The Doak Historic Site, also known as the Doak House, is a Provincial Heritage Site located in Doaktown. The farm was purchased in the early 1820s by Robert “Squire” Doak and lived in until 1979 by his family.

Robert Doak was born in Ayrshire, Scotland on April 4, 1785. He was the third of eight children. In 1808 he married Jean Kirkland and they had three sons and three daughters.

In 1815 he and his family left Scotland intending to settle in Kentucky. However, inclement weather forced their ship into the port of Miramichi, and the passengers were landed there. Doak remained in the colony at Newcastle and by 1817 had established himself as an innkeeper in nearby Nelson Parish. The next year his elder brother, James, arrived with his wife and three children, and both brothers entered into partnership with Alexander MacLaggan to operate a mill in Blackville. By July 1822 the Doaks had sold out to MacLaggan and moved approximately 20 miles farther up the Southwest Miramichi River to the present site of Doaktown; there they were joined by their father, who had recently emigrated from Scotland. On 1 April 1825 Robert Doak Jr purchased lot 45 from the Ephraim Wheeler Betts estate (having earlier obtained two adjacent lots for farmland) and his brother James and his family settled in close proximity. 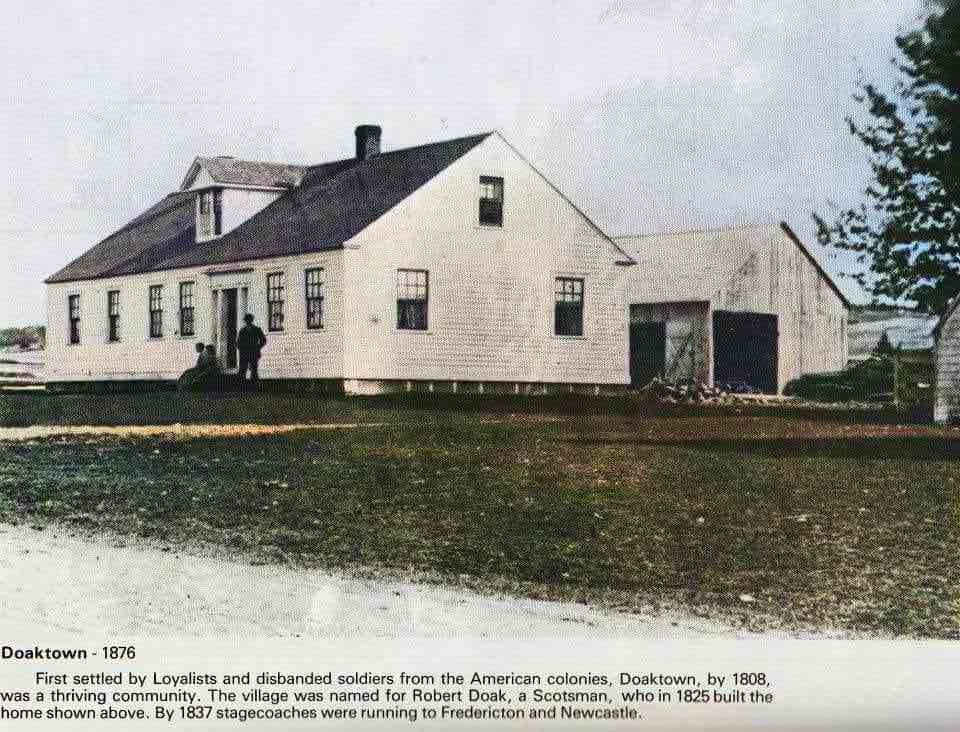 Doak’s son James Andrew and his family was to share the homestead, Doak soon had constructed. First constructed as a 1 ½ storey house of 5 bays with a central fireplace chimney prior to 1825, the house evolved into a central hall plan house by mid 19th century. The 2 bay east end addition and back ell were later additions. In the mid 19th century, architectural changes included a front entrance door with sidelights, wood clapboard finish and the stove chimney which replaced the central fireplace chimney.

The offset front dormer installed to provide light to an upper room was added when the house was expanded to create 7-bays across the front. Doak House represents a rare surviving example of this type of residence constructed by Loyalist settlers in New Brunswick prior to 1820.

The original barn which inhabited the property for over 100 years was torn down in June 2016. An assessment completed in 2014 deemed the building to be unsafe and the barn was closed to the public due to structural damage and rot. The barn was reconstructed.

A small milk house is located on the property which was used to house the dairy products produced on the farm. Products were kept cool through an underground tunnel that was dug that brought water from a nearby stream to the milk house. The cold, continuous flow of water kept products cool.

A school house located on the property dates back to 1822. The school was originally located a few miles down the road from the Doak Historic Site but was moved to the property to protect the heritage building.

Doak soon had constructed and was operating a carding-mill, gristmill, and kiln, and later built a sawmill and oatmeal mill, the latter serving the whole of Northumberland County. The mills were operated by water-power; there was a brook-fed mill-pond at the rear of the property which provided a constant source of water. Doak also farmed and, according to family tradition, “raised as many as one hundred hogs every year which they salted down or smoked to be sold. The cellar used to look like a wholesale grocery at times.”

Shortly after his arrival in upper Miramichi, Doak became involved in local government. In 1822 he was appointed overseer of the poor, town clerk, and clerk of the market. The following year he became overseer of highways for the district and in this capacity he supervised the construction of the road between Fredericton and Newcastle.

The Miramichi fire of October 1825 affected Doak and his enterprises, although not as disastrously as it did many of the earlier established settlers. Claiming a loss of £20, he petitioned the relief committee set up by the provincial government and received half the amount. In the same year he was appointed a justice of the peace for the county. Unlike most other men after 1800, Doak had managed to bypass many of the lesser municipal offices such as overseer of fisheries and fence viewer: the normal pattern was to hold two or three of the more minor positions before becoming a magistrate. In 1826 he became a school trustee, a post which ten years later enabled him to force long-term squatters from a school reserve lot adjoining his own property and to have the land granted to himself later that year for “safe-keeping.” A school was eventually built on the site. Appointed acting coroner for the area in 1829, he was still holding inquests as late as 1844.

Until the mid 19th century, the settlement had remained nameless, at times being referred to as part of Ludlow and after 1830 as Blissfield Parish. Following the completion of the highway and the establishment of a post office, the village was designated Doaktown, because Doak was the most politically influential and the most affluent resident. When in 1847 the first bridge was built across the Miramichi at the village, Doak, who admired a large elm tree standing directly in line with the road, persuaded the road supervisor, for £5, to place a slight crook in the highway.

Doak’s career was not without blemishes. At a special session of the county council in 1819, he was accused of keeping a gambling house. In 1830 he was fined for the unlawful selling of spirituous liquors – a common offence of the times, yet unbefitting his position. And from 1837 to 1840 he was a key figure in an unpleasant domestic lawsuit between himself and his son-in-law William Robinson, “an absconding debtor”; at the same time he served as a presiding magistrate at the trial.

Doak, commonly known as “the Squire,” was noted for his benevolent spirit; he contributed generously to the religious and educational life of the community, with gifts of land for a Baptist church (although the family was Presbyterian) and the local school.

In 1852 when the new highway connecting Fredericton to Newcastle was built Betts Settlement was renamed to Doaktown after the large influence that Robert Doak had on the area.

The house and farm was passed through the Doak family for four generations. The property was lived on until 1979 when Robert Doak’s great great granddaughter, Margaret Doak passed away and left the property to the New Brunswick Government. In the early 1980s the property was opened to the public as a provincial heritage site.

The Doak Historic Site is open from late June until early September and closed during the winter. During the open months activities and classes are held. Admission to the site is by donation.