Drury Lane Theatre, the first building to be used uniquely as a theatre in Saint John, opened on 3 February 1809. It was also known as the Theatre in Drury Lane and the Saint John Theatre.

The idea for the theatre came from garrison officers of the 101st Regiment under Major George O’Malley in January 1809. O’Malley and his charges were headquartered at Fort Howe. Garrison theatre was a tradition in Britain, and it was something that the Fort Howe soldiers wanted to continue when stationed in Saint John. Interest in a theatre spread quickly around the city, and construction commenced. Despite it being one of the coldest winters in recent years, the building was ready in just under a month. On 30 January 1809, the Royal Gazette reported that minor construction delays forced the company to postpone opening night until 3 February 1809.

Located in York Point, a fashionable district of Saint John, Drury Lane Theatre was constructed out of the shell of an older building on the corner of Union Street and Drury Lane. Now known as Red Rose Corner, the district also housed Lawrence’s on Union Street, which held gala balls. Upon completion, the 56-by-26-foot auditorium had a green room for rehearsals, boxes, a pit and gallery, as well as several other rooms for workshops, storage, and meetings. The stage was small, but it had a proscenium arch and a narrow apron .

The theatre’s performing company, made up of officers and civilians, called itself “His Majesty’s Servants”. On opening night, they performed Joseph Holman’s Abroad and at Home and Isaac Jackman’s All the World’s a Stage. The latter was a local favourite among amateurs. The performances went off without a hitch, and the city’s Royal Gazette reported soon after that the spirited actors drew a great crowd, were impressive, and set a wonderful example for future productions (6 Feb. 1809). 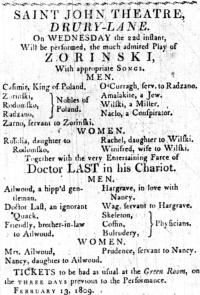 Following opening night, Drury Lane had a busy season. February, March, and April each saw two programs, with one more in May, making up a performance list of ten different productions. The majority of the scripts were farces and comedies, such as The Brave Irishman by T. Sheridan (7 Mar. 1809) and John Bull, Or, the Englishman’s Fire-Side by George Colman (2 May 1809). The only troubles experienced were military obligations for actors that often caused performance postponements, although that did not dampen the theatre’s popularity. A seat in a box was 5 shillings, a seat in the pit 4 shillings, and a seat in the gallery 3 shillings. Ticket prices were higher than elsewhere in Saint John, though the theatre quickly gained the attention of upper classes and the intellectual elite in the city. Plays performed in the city were normally held at houses and taverns, so the higher price of tickets at Drury Lane was due to rent costs. According to the company’s newspaper advertisements in the Royal Gazette, tickets had to be purchased from the green room three days prior to the show to assure proper seating; no money was taken at the door (6 Feb. 1809).

In July 1809, the 101st Regiment at Fort Howe was sent to the West Indies. With the regiment’s men making up the majority of “His Majesty’s Servants,” Drury Lane suddenly had no performing company. The remaining players were mostly students who focused on other things, so there were insufficient numbers to keep the theatre running. In a public auction notice in the Royal Gazette on 20 November 1809, it was reported that the building, wardrobe, and props were to be sold on 22 November. As a condition of sale, the buyer had to keep the building as a theatre; however, there is scant record of any performances there again until 1815. The one exception is C.S. Powell’s one-man variety show called The Evening Brush for Rubbing Off the Rust of Care, performed at Drury Lane on 16 May 1810.

In 1815, teenagers Neville Parker and James Lyster gathered a company to perform at Drury Lane. Like “His Majesty’s Servants,” this new company catered to the same audience and sold tickets for the same prices. They performed for two seasons in 1815 and 1816, each opening with a performance for charity. In April 1815, there was a notice in the New Brunswick Courier requesting that the public lend any of the scripts in an attached list to the theatre if they were available. This list included No Song, No Supper; Love À-la-Mode; Fortune’s Frolic; Ducks and Green Peas, or the New-Castle Rider; Miller of Mansfield; The Citizen; and Raising the Wind; as well as an open invitation to lend any other scripts available. For the remainder of the 1815 season, the performances often reflected this list. As before, most of these were comedies, with Love À-la-Mode being the most popular.

The 1816 season was very brief, with only two known programs following opening night. The first program included performances of The Soldier’s Daughter and The Jew and the Doctor, and the second program was a local script titled The Sailor’s Return or Jack’s Cure for the Hystericks, performed on 9 March 1816. With no other performances for several months, Drury Lane Theatre was once again sold at an auction on 16 July 1816. This time, there were no orders to remain a theatre, so actors in the city moved elsewhere  and Drury Lane passed into history.

One thought on “Drury Lane Theatre”