The Fredericton Exhibition, as fair patrons know it today, owes its origin to the enthusiasm of Sir Howard Douglas. As Governor of New Brunswick from 1824 to 1831, he proved himself one of the best administrators of the Colonial period. He did much to encourage road building, agriculture and education; and he promoted New Brunswick’s first exhibition.

Sir Howard called a meeting in the Province Hall in Fredericton on February 17, 1825, to stimulate agricultural effort in the Province. In addition to the elected members of the Legislature, Sir Howard also invited prominent citizens from all the Counties and in his opening address outlined a plan for the formation of a central agricultural society. During the meeting an organizing committee was formed, the membership of which included Hon. Judge Botsford as chairman, Harry Peters, then Speaker of the Legislature, Col. John Allen, Samuel Nevers, Peter Stubs, Hugh Monroe, Charles Simonds, David B. Wetmore, William Crane and Samuel Scovil.

The committee presented a report at the second meeting held on March 5, 1825, and from this report the New Brunswick Agricultural and Immigrant Society emerged. Chief Justice Bliss became president; Hon. Judge Botsford and Hon. Thomas Baillie, vice-presidents; Ward Chipman, Peter Fraser, Harry Peters, Peter Stubs and Jedediah Slason as additional member of the executive. Sir Howard became patron of the newly formed Society and, in a speech of acceptance, announced that he had been authorized to grant from the King’s casual revenue the sum of $ 25 for the aid of an Agricultural Society in each County of the Province.

At the annual meeting of the Agricultural & Immigrant Society held in Province Hall on February 19, 1827, the members voted in favor of holding a Provincial Cattle Show on the grounds of the Fredericton Race Course on October 9.

By mid-century the Exhibition was a well-established event in the life of the Capital City. The association with the Provincial Government had been preserved and a building called the Colonial Palace had been erected in 1852 on ground directly facing Old Province Hall. 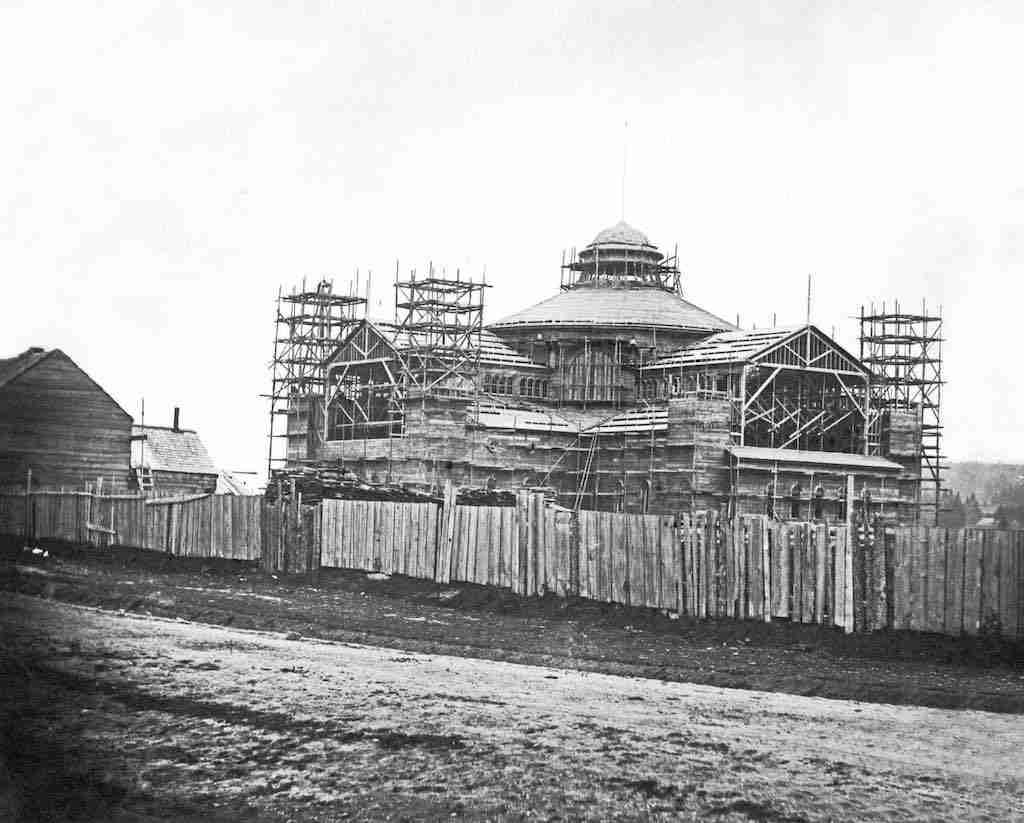 When William Watts was designing the pavilion for the great Provincial Exhibition of 1852, he probably did not dream that an art gallery would supersede his early cultural effort more than a century later. The Beaverbrook Art Gallery now stands on the ground so briefly occupied by the pavilion.

In 1850, the New Brunswick Society was formed for “the encouragement of agriculture, home manufacturing and commerce throughout the province”. 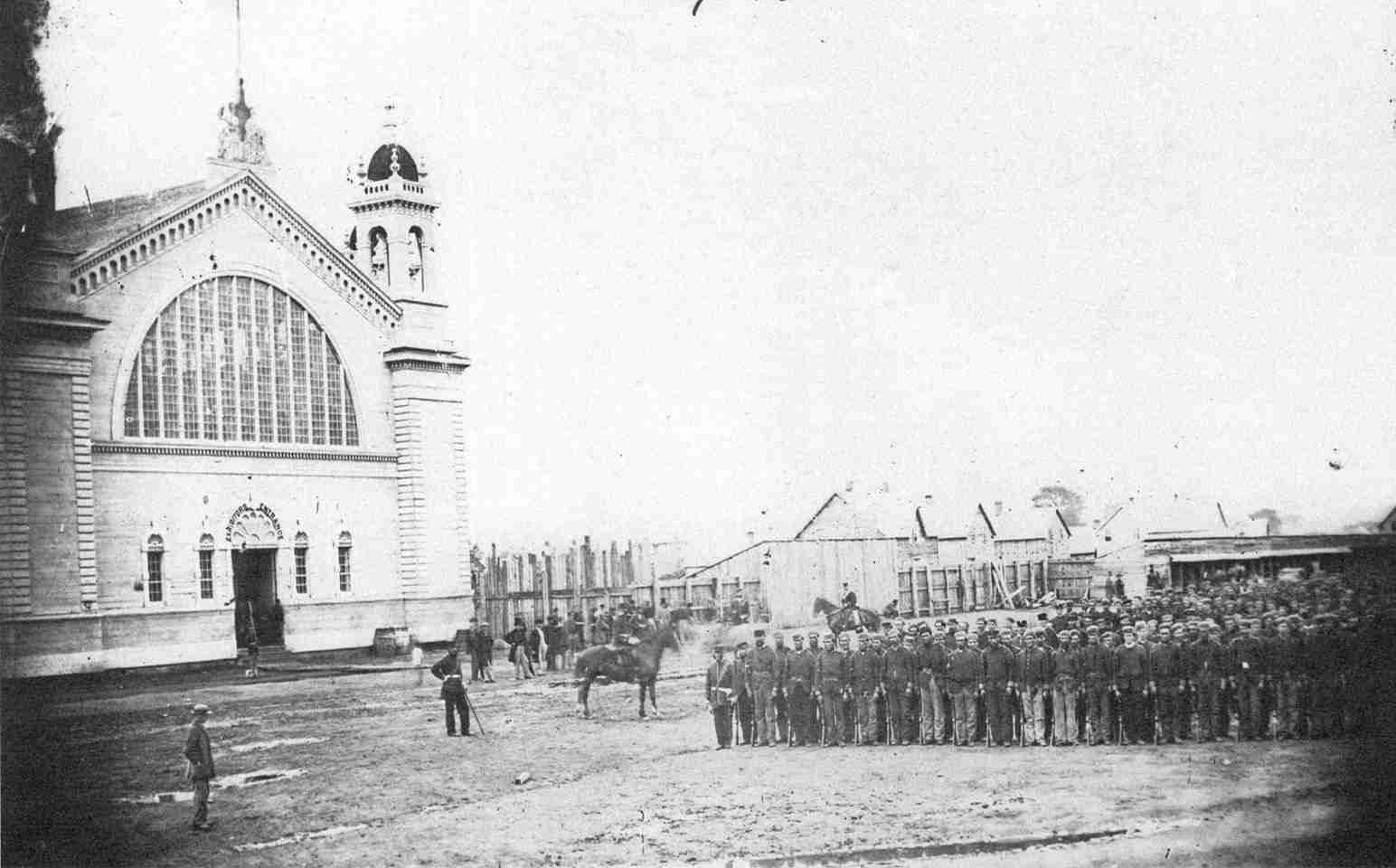 The Lieutenant-Governor, Sir Edmund Head, was patron of the Exhibition, and Hon. George Frederick Street was president.

William Watts at the time was editor of the weekly called “The Headquarters”, published by James Paul Agutta Phillips in a frame building at the corner of Queen Street and Camperdowne Lane. In addition to designing the Pavilion, Watts also composed “The Song of the Great Exhibition”, which was set to music by Col. S.K. Foster of Saint John and arranged for the Masonic Band by Micheal White.

Influenced by London’s Crystal Palace of the Great Exhibition of 1851 with its visible structure and expanses of glass, the local cruciform Palace was designed by architect Matthew Stead for $28,000 in 1864. The dome was 86 feet in diameter and was the largest piece of wooden framework ever raised in the province up to then. The Ladies Gallery at the east end and the Music Gallery at the west end would accommodate 100 people each.

John McInnis, manager of the newly formed gas company, was in charge of the lighting. The gas company had been founded only in 1850, so the new-fangled lights were still something of a novelty. Naturally lit by day, evening illumination was from 650 gas-burning fixtures and lamps held aloft by 24 statues. Great winged dragons carved from wood formed the chandeliers. The monsters faced north, south, east and west and flame sputtered from the mouth of each. Below, heraldic griffins belched gaseous light upon the display shelves. The building  was consumed by fire in 1877.

The Pavilion must have presented an imposing front to the thousands of visitors coming to Fredericton by the riverboats. The lower part of the building was made of boards, the clerestory of the glass and the roof of canvas. A 12-foot Britannia, supported by the Lion and the Unicorn, stood over the main entrance. The point of her trident was sixty-five feet above the ground. Sixty flags floated over the roof of the Pavilion.

The porch of Province Hall served as the beginning of a passageway that connected the older structure with the Pavilion. The various offices and chambers of Old Province Hall made valuable exhibit space.

The Pavilion “was crowded to overflowing with horticultural produce, agricultural implements, tools, fish, cheese, butter, honey, leather, ropes, ship’s furniture and paper”. In all, about 1,000 competitors made over 4,000 individual entries.

The grand opening was 12:00 noon on Tuesday, October 5. One round fired from a cannon manned by militia artillerymen was the signal for the take-off of a grand procession. Leading were the band and pipers of the 72nd Regt., then in garrison, known as the Duke of Albany’s Own Highlanders or the Seaports.

Next came the uniformed Fire Companies of Fredericton and Saint John complete with fire engines, while the Masonic fraternity in full regalia brought up the rear. After the parade the local Fire Companies tendered a luncheon at the New Market Hall on behalf of the visiting units from Saint John.

Promptly at two o’clock, Sir Edmund Head, attended by a Highland Guard of Honor, entered the Pavilion to a salute of 19 guns. Hon. George Frederick Street, as president of the New Brunswick Society, received the Lieutenant-Governor.

Sir Edmund and Lady Head, with their numerous trains, then occupied places of honor on the dais placed under the Music Gallery. A massed choir from the churches of the City occupied the Ladies Gallery and these were balanced by the full band of the 72nd Regt. in the Music Gallery.

When the combined volume of brass, reeds, drums and vocals let go on the National Anthem, the occasion seems to have been some kind of musical moment. Immortalized in yellowing newsprint the scene unfolded like this:

“The weather up to this point had been wet but at the moment the voices and instruments blended in the strains of the National Anthem, a burst of radiant sunshine flooded the spectacle”. (Doubtless a token of Divine Approval of the Great Exhibition.) The formidable combination of band and voices afterward rendered the Doxology and The Song of the Great Exhibition.

There followed “the customary exchange of addresses and tour of the Exhibition”.

Wednesday, October 6, was given over to the cattle show at the Grove, a beautiful tree-shaded area that once extended northwestward from the present Queens Square. Over the main avenue was an arch decorated with flowers and evergreens.

In the evening the officers of the New Brunswick Society and the general public attended a lecture in the New Market Hall given by Hon. L.A. Wilmot.

Thursday, The Grove was given over to athletic sports. At the regatta, held the same day, the gig races were reported “very fair” and the canoe races excellent. 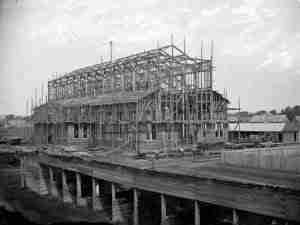 A second, though lesser, Exhibition Building was built in 1881. The new structure was on a site west of Smythe Street and back of Saunders, which would place it roughly on the present fairgrounds. It was designed by Croft and Camp of Saint John. It was an oblong measuring 200 X 75 feet and the long sides were flanked by sub-structures 20 feet in width and 75 feet in length. The building had a central tower 100 feet high and a 17-foot gallery all the way around the interior, a total distance of 550 feet.

The musicians’ gallery was raised four feet above the rest of the gallery. Four grand staircases connected the two floors. This building followed its predecessor in flames on July 11, 1882. Again we quote Mayor Fenety: “The second Palace arose upon the ashes of its predecessor out of funds provided by the Government, but the City and by private subscription… Not withstanding previous experience in not having a caretaker living on the premises, there was sad neglect again in this respect. Not only so, but there was no insurance outside the City’s interest in the building, which was $4,000, and upon which $3,000 protection was placed”.

A third building was constructed by one of Fredericton’s foremost building contractors, William J. Scarr. He quietly skipped town just before finishing his biggest project (the 1901 Provincial Exhibition Building).