Baptist influence in the area of the Bend, later named Moncton, led to the erection of the Free Meeting House. Located at 20 Mountain Road in Moncton, the Free Meeting House was built to serve as a home to all religious denominations in the area until they could raise funds to build their own churches. The building was dedicated for service by Baptist missionary, Elder Joseph Crandall on September 7, 1821, and is one of Moncton’s oldest standing public buildings. The Free Meeting House is designated a National Historic Site of Canada.

The growing congregation built their own House of Worship at Church and Queen Streets and moved to their new church in 1857. Electric lights were installed in the church in 1886, and one year later, the church was remodelled and expanded with two side wings and a rear extension. In 1909, a magnificent three manual Casavant organ, with 1,823 pipes was installed. 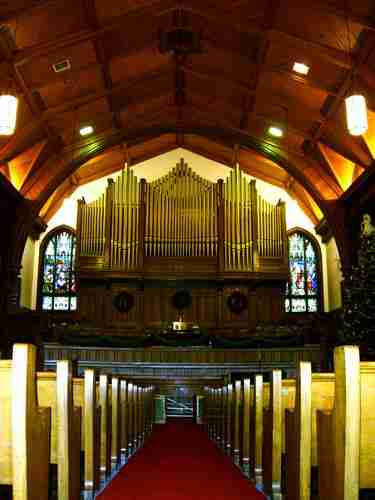 Tragically, in 1913, a fire which started in the Victoria Rink nearby, completely destroyed the beautiful wooden structure. The congregation faithfully responded to the challenge and in 1914 the cornerstone of the new building was laid, with services being held in the basement by December. 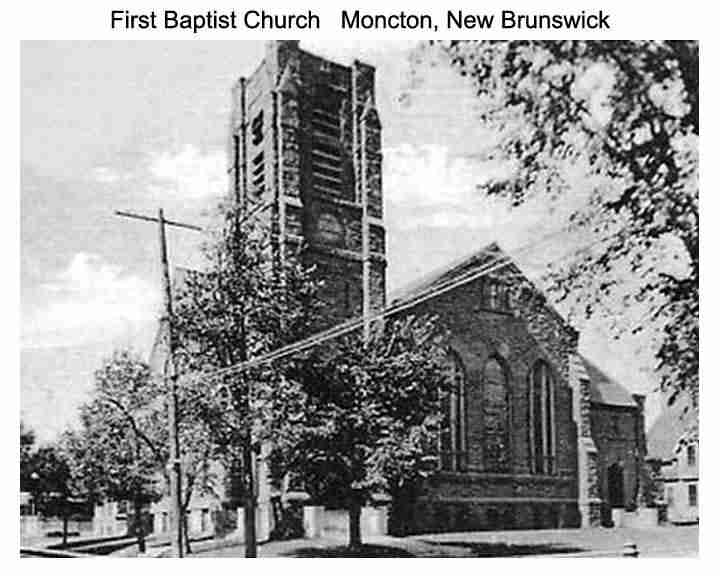 On May 16, 1915, the new building was dedicated and 4,400 persons attended the two services. Forty-nine persons were baptized that day and more the next Sunday. The Sanctuary featured 1,100 seats and an impressive 35-stop Casavant organ. The cost of the building and furnishings came to $89,946.

In 1918, the Vestry, Brotherhood Hall and Sunshine Room served as an Emergency Hospital for those with the Spanish influenza, which caused more deaths in a few weeks than had occurred in all the years of the Great War. A few years later, on Easter Sunday of 1921, a memorial stained glass window was dedicated, honouring the 37 church members who lost their lives in the war.

During the time of the Great Depression, CKCW radio station started a monthly broadcast of a Sunday evening service in 1935, and in 1937, began a weekly broadcast of the Men’s Christian Brotherhood. It was reported that over 100,000 people tuned in to the weekly Sunday program. In 1945, following World War II, a second Memorial Window was dedicated, honouring the 26 church members who made the supreme sacrifice.

In 2001, the church again relied on the faithfulness of the congregation to raise approximately $750,000, which was used to pay off debt, and to carry out renovations and upgrades of the facilities which included work on the church foundation, bell tower, accessibility, a new electrical entrance and upgrade, new heating boilers and conversion to natural gas, and organ refurbishment. A donation to Camp Wildwood was also made to name a new cabin in honour of Dr. T. Elgar and Edith Roberts.