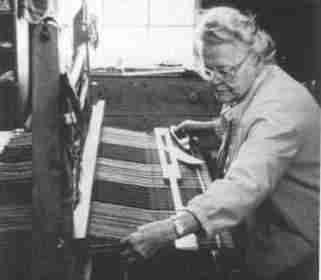 Built in 1810 by Hugh Johnson, Jenkins House in Gagetown, takes it’s name from a later owner, tartan designer Patricia Jenkins. A renowned artist whose designs have been used internationally, Mrs. Jenkins had the old home renovated to better suit her needs as a workshop and store as well as a private residence. This renovation is key, as so many haunted house stories seem to start when new owners decided to make a few changes. All we did was switch up the furniture and take down the old wallpaper…

It wasn’t long after moving in that Mrs. Jenkins began to feel shadowed by an unseen – at least to human eyes – presence that she sensed following her from room to room. Working alone in her weaving studio, she couldn’t help noticing the prickly feeling at the nape of the neck that comes on when she knew she was being watched from behind. You must be familiar with that sensation; the one where you have to fight the urge to turn around, lest you let on that you know someone is staring in your direction? It’s one thing to feel eyes at your back in a public place, quite another to encounter it day after day (or, worse still, night after night) as you try to concentrate on your supposedly solitary work. Weaving the old fashioned way, at a floor model hand loom, is a quiet, peaceful craft. The only sound comes from the soft glide of apparatus against thread. Weavers develop a rhythm to their movements that they quickly slip into when they begin work. An uncomfortable, and unexpected invisible presence is hardly welcome in a weaving studio.

Visitors to the house also reported noticing an uncomfortable atmosphere. At first it was a reported odd sensation here or a moved small belonging there but over time people became more and more reluctant to be overnight guests at Jenkin’s House. Not that the haunting, such as it was, became difficult to the point of making the house unlivable. In fact, while people reported a dreary, sad feel to the premises despite all the renovations and new furnishings, it was the Jenkins cat who took most notice of any possible ghost. The cat would appear to watch as the invisible presence moved about the room, turning its head to follow the activity.

Wait now, the Jenkin’s House haunting grew into recognition mainly because of a cat doing, well, what cats do? Anyone who lives with a cat or two knows what I’m on about; cats have an unsettling habit of intently watching unseen somethings move about the room. Mine even literally climb the walls, guttural cries included, in an attempt to catch…dust? Reflected light? Tiny house spiders? Fruit flies? Ghosts would be at the bottom of my list, unless I’ve attracted ghosts who enjoy sitting in the corner by the ceiling and taunting cats. It would seem, on first glance, that the Jenkin’s House haunting was nothing more than a convenient case of suggestibility. A cat gazing at an “unseen presence” offers enough corroboration for minds that want to think they’ve been sensitive enough to spot the spook in an old house rumoured to be haunted. Suggestibility is covered by the human tendency to buy into whatever those around us are believing, especially when we really, really want to and the whole case is convenient because, well, Mrs. Jenkins was running a business and what business owner doesn’t like attention? A haunted house – not too haunted but just enough – is a fine fit for an artist.

But I said “at first glance”, didn’t I? A little digging into the past of the home uncovers a property ripe for ghostly encounters. Jenkins House has a history perfect for a haunting; the original owner’s eldest daughter died there in childbirth, one of his sons drowned in the nearby St. John River, and a woman committed suicide on the property. This last tragedy happened after another Johnson son broke off his engagement to wed the younger sister of his first betrothed. In a poorly thought out move deserving of an episode of The Maury Show, the newlywed couple invited the spurned sister to share Jenkins House with them. Watching her former lover enjoy marital bliss with her own sibling proved too depressing for her, hence her untimely end hanging in the closet of an upstairs bedroom.

The last death, that of the suicidal sister, was thought to have spawned a ghost prior to the Jenkins inhabitance. At least one other witness *, Peggy Lucas, claimed to have been visited by a woman dressed in white. At that time, she was unaware of any tales of ghosts connected to what was still Johnson House. Then a twelve-year-old overnight guest, Peggy lay in bed, unable to sleep. Something about the room, the chill air perhaps, keep her awake. As she lay in the semi darkness – the only light coming from the moon outside a frontward facing window – her attention was pulled toward the opposite corner of the room. She watching as a pale woman walked from the bedroom closet, passing through the unopened door, toward the window before vanishing. Was it the waking dream of a young girl, a hypnagogic hallucination influenced by staying in the room where a suicide had occurred in the closet or something else? Remember, Peggy Lucas claimed to have known little of the history of the house back then. Old suicides were not commonly discussed with adolescents and the home had not yet attracted its haunted reputation. So no, Patricia Jenkins was not the first to report signs of a haunting at the house.

Was there something strange in Jenkin’s House? Perhaps only the cat knows for certain.

One thought on “The Jenkins House Ghost”