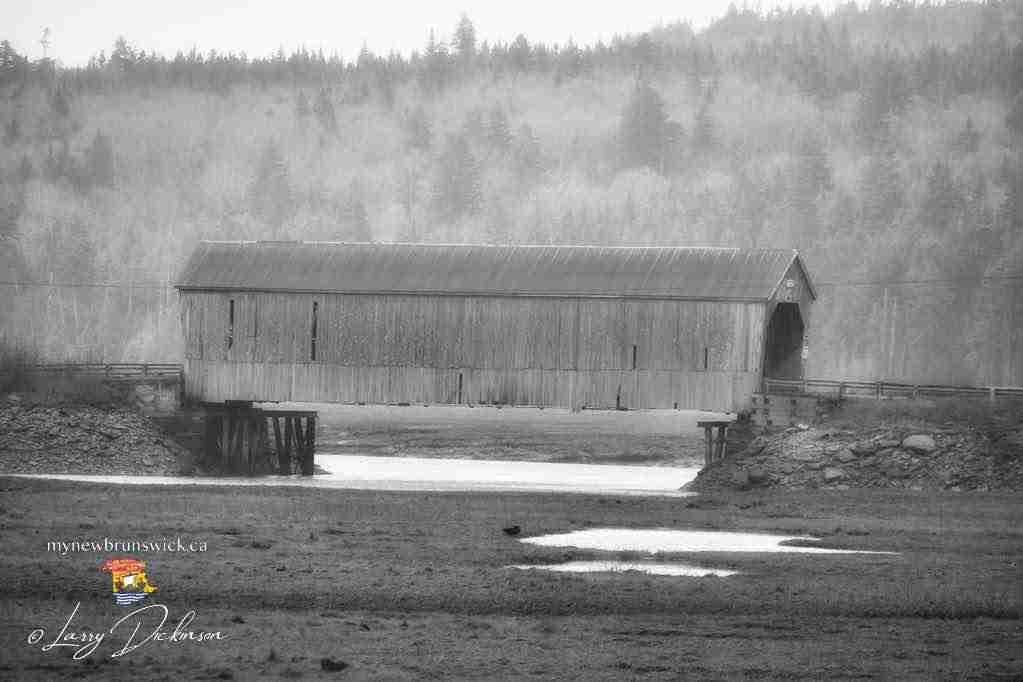 There was a time when New Brunswick could rightly called the covered bridge province. Once, there were over 300 of the famous wooden structures. The Keenan Covered Bridge was among the most famous and, before it too burned, was a tourist draw, and point of historic pride, for tiny Johnville, in Kent County. The Keenan bridge, plus its predecessor from the 1800s, spanned a 26 meter portion of the Monquart River. Despite a haunted reputation, the bridge setting was a town focal point, often host to parties and picnics. However, the locals, unlike the eager tourists, avoided the area by night. Why? Well, that’s a story that starts back in the days of the original, 1800s bridge.

Even without the curious later developments, the Keenan bridge was eerie enough by virtue of one unfortunate event. An elderly woman, well-known and respected in the town, was seen to enter the covered span from the Johnville side, but she never emerged on the opposite river bank. A disappearance of this sort – in a safe, small farming community of the mid 1800s no less – was the type of thing to unsettle a town, not to mention give a bridge a dark reputation. No sign of the missing lady was seen for years until, in 1890, the headless body* of a woman was discovered buried not far from the bridge exit.

Come 1927, it was decided that the Keenan bridge needed an overhaul, and this is when the story becomes all the creepier. During the rebuilding project, a human skull was pulled from between the bridge planks. The general consensus was that this surely was the head of the missing woman (and, one would guess, linked to the aforementioned body), but what actually happened to this head is up for debate. All agree that it was reburied, though the location – near the bridge, alone in the cemetery or reunited with the previously unearthed body – is unclear. Regardless, we now have, at minimum, a missing old woman, a spooky legend and a disembodied head, along with a potential body to match. Anyone who has ever walked the length of an old fashioned, wooden covered bridge at dusk, treading swiftly over the boards as dark water flows beneath, smelling the mingled scent of damp, pine and, faintly, horses, knows how perfect a setting one makes for a ghost. As you would expect, it wasn’t long after the replacement bridge was completed before a resident spirit was being reported.

Meeting up halfway across a bridge, late at night, with a headless woman would be bad enough for most folks, but how about one who likes to join you for a ride in your carriage or car? One of the first sightings involved a man, much respected in town as credible, who came home in a panic after a woman, clothed in a long, black dress stylish before 1900, wearing a shawl over her shoulders but neglecting to place a head atop her neck, appeared first alongside his waggon and next, beside him on the seat. Horses – and driver – spooked, the waggon tore off down the road in a blur, the man recalling little of his ride home other than the frightening encounter with the Headless Lady of Keenan Covered Bridge.

The ghost had no problems transitioning to the modern era. She was reportedly as comfortable hopping into the passenger seats of cars, the backs of open trucks, campers, vans and any other motorized vehicle capable of crossing a wooden bridge that you care to mention. Normally, she was simply seen, though a few folks were lucky (depending on your definition of luck) to be treated to a bit of hand holding with their ghostly passenger. Despite her reputation for loving a nice drive across to the other side – And who can blame her, considering how fatal her last, living walk over the bridge had been? – the most common reports simply placed her standing near the either entrance of the bridge, still minus, of course, her head.

So far, we have a fine haunting, but remember how I told you that this the Keenan bridge ghost only really came into her own as famous in 2001? Hehe…there’s always more to the best of these stories than rumours of ghosts in the dark. On May 3rd, 2001 the Keenan Covered Bridge was destroyed by fire, leaving little behind but smoking timbers fallen into the river below. Police and fire officials taped off the area, keeping nosey locals away from a potentially dangerous spot (and protecting the site for investigation as well), but not before one of them took several photographs of the damage for his own commemoration of the loss. Months later, when a community gathering was held to remember the old bridge, he brought along his newly developed pictures. There was a surprise waiting for everyone, including the amateur photographer; the Headless lady of Keenan Covered Bridge had put in a final appearance. In several shots, a woman’s head – just a head – is seen superimposed over the charred end of bridge timber. Experts were even brought in to examine not just the photos but what remained of the bridge itself, but no logical explanation was ever found for the floating head.