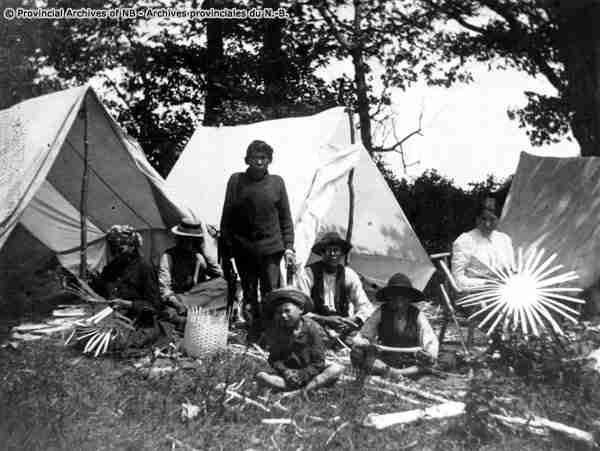 The following is from “In Indian Tents”: Stories Told by Penobscot, Passamaquoddy and Mimac Indians to Abby L. Alger, Boston, 1897. The Penobscot and Passamaquoddy people are cousins of the Maliseet or Wabanaki, and the Mi’kmaq are neighbours with a related language.

Many years ago an Indian family, consisting of an old father and mother, their two sons, and their baby grandson were camping in the woods for the winter hunt. In the same neighborhood lived a horrible old witch and her three daughters. This witch ate nothing but men’s brains and skulls. She would pick the bones clean, and dry them, and had a long row of such trophies all-round the upper part of her wigwam, looking like so many snowballs. From this she took her name, and was known as old Snowball.

The girls were very beautiful, and set out by turns every evening to ensnare some young man for their mother’s meal. So it happened that soon after the Indian family had settled in camp, one twilight, as they sat round the fire, a beautiful girl passed by, so charming the eldest son, that he set out in pursuit of her and never returned, having fallen a prey to Snowball. A night or two later, another equally lovely girl appeared, and the second son, who was a widower, and the father of the baby boy, started to chase her, with the same result. The same fate befell even the old man, and the poor old woman was left alone with the baby. She was terribly afraid that the witch would get him too, and kept him hidden in a great birch-bark basket, or t’bān-kāgan. As he grew older and began to talk and run about, he was always wishing that he were a grown man, that he might help his grandmother, hunt for her and fetch in wood for her. At last, the old woman, who was something of a magician, told him that if he really was so anxious to be big, he might lie down that night on the other side of the fire, and she would see what could be done. Next morning, behold, he was a full grown man. His grandmother brought out her husband’s pack kettle, and gave him all the tools and weapons which he needed, stringing his bow with her own hair. Thenceforth, he brought in plenty of game, and they would have been very happy if the old woman had not constantly dreaded the appearance of the witch’s daughter. At last she came, looking more fascinating than ever; but the young man went on with his work, and never raised his eyes. Next night, the second daughter passed by; he looked up at her, but that was all. The third night, the third daughter, youngest and fairest of all, appeared. He sprang up to follow her; but his grandmother begged him to stay, or she would kill him as she had slain so many of his family. He finally consented to wait till another night, and said that he would not chase her, but merely follow and see where she went. His grandmother wept bitterly, but did her best to ward off misfortune, by seeing that he took the bow strung with her hair, and also a certain small bone from the mink, possessed of great magical power. The young man soon turned himself into a tiny bird, or chūkālisq’, and hopped about almost in reach of the girl’s hand. He seemed so tame that she thought she might lay her hand on him, and indeed after several attempts she did contrive to catch him and put him in her bosom. Then she ran home to tell her mother of the lovely bird that she had found. “That is no bird,” said her mother; “just let me look at him.” She put her hand in her breast, but there was nothing there. From that moment she grew bigger and bigger, and in due time gave birth a fine boy. Her mother wanted to kill the child; but she would not consent and, for safe keeping, carried the baby always in an Indian bark cradle strapped over her shoulders. Meantime, the spell of her beauty held possession of the young man, and he could not rest till he saw her once more. Turning himself into a deer, he sought Snowball’s lodge, where he gambolled and played about until the three girls ran out to see the pretty creature, forgetting the baby who had been left behind. The deer led them into the forest, and then sped back to the lodge, where he found the witch just about to kill the child and devour its brains. Taking his spear, he at once slew her and, hiding himself, killed the two older girls in turn as they returned home. When the third daughter appeared, he stepped forward and claimed her as his wife. “Now,” said he, “you must stand aside, for I am going to burn up the lodge with the bodies of your mother and sisters.” She was very unwilling, but at last yielded. The old witch was loath to die, and rose repeatedly from the flames; but the magic spear was too much for her.

The young man, with his wife and baby, went home to his grandmother, and for a year lived very happily. Then the young woman became sad and silent and, when questioned, said that great trouble was at hand, that her aunt, who was a powerful sorceress, was coming to avenge the murder of her kindred, and she feared the consequences. The grandmother made all preparations, this time stringing the bow with the young woman’s hair. Next day the baby began to cry, and nothing would quiet him, until the old woman thought of giving him her husband’s bark pack kettle, where some of his ancient treasures were still kept. Then the baby smiled, and began to turn over the things and play with them. Suddenly he laughed aloud and cooed for joy and toddled to his father with a little bone. “Fool that I am,” exclaimed the old woman, “how could I forget that! This bone may save us yet.” The young man bound it to the head of his spear and set forth, his grandmother having told him that the time had come, and that he must that day kill the great Beaver (his wife’s aunt), or the whole family must perish. He soon came to a great lake where there was a beaver dam as high as a mountain. He could see the big Beaver moving about under the ice; but all his efforts to pierce the ice were in vain, it grew thicker and thicker under his spear, and rose in great waves. He returned at nightfall discouraged, but started out again next day, his grandmother tearing apart her scarlet bead-wrought legging, and bidding him fling that on the ice to see if it would not break the charm. All day he strove, but even the legging was of no avail. Next day he took the second legging, and at last succeeded in striking his spear through the ice and into the enemy, Quābīt. Then began a mighty battle, Beaver struggling to break the spear or to escape, and the young man fighting to retain his hold. At home the baby began to scream and cry, and the women knew their hero was in danger. The grandmother wept as if her boy were already dead; but his wife said, “Fear not, for I will help him.” She flung a handful of magic roots out at the door, and instantly a sheet of water lay there, and she was at her husband’s side. She told him not to loose the spear, but to watch well, that she would fight his battle. “If you see me pass under the ice before my aunt, all is well; but if she comes first, she has conquered, and we must all perish. I shall be all white like snow, while she is jet black.” The young man stood rooted to the spot, while the ice cracked and heaved with fearful noises. At last the white beaver passed before him under the clear ice, and he knew that victory was his. His wife then told him that there was still another and a more terrible enemy to be conquered before he and his [family?] could be safe. This triumph too she gained, though at a fearful cost, for she was never again to see her husband, home, or child. The young man went back to his grandmother with drooping head, and heard how the baby had kept his grandmother informed of the progress of the fight by his changing tears and smiles. And that is all about it.