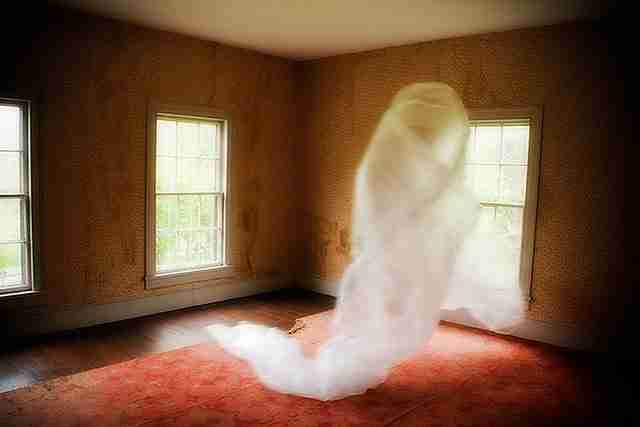 My grandmother lives in an old 10 bedroom house from the turn of the century (early 1900’s) in Woodstock, and I’m unclear as to whether or not anyone has died there. But I have seen the same apparition on a couple different occasions in the house.

There is a room on the second floor which my cousins and I call the ‘red room’ because before we were born my grandparents had bright red carpeting put in the room. When we were kids the room wasn’t slept in, it was only used for storage but we loved to play in there. When I was a teenager the room got cleaned out and we started sleeping in it while we were there. One night my cousin and I were sleeping in the room and I woke up in a panic. And for some reason even though it was summer I was cold. And when I sat up in bed I saw in the corner, sitting on a pile of boxes, what I thought was another cousin of mine who was staying there with us but sleeping in another room. I was wondering why he was just sitting there watching us sleep. So I said his name and asked him what he was doing. He never answered so I repeated his name louder, thinking maybe he’d fallen asleep there. My cousin who was sleeping beside me woke up then, and also started to say his name. Suddenly he got up and walked across the room into the closet. Thinking he was playing a prank, we got out of bed and flicked on the light. We were both terrified when we checked the closet and he wasn’t in there.

Again a few years later my grandma had taken on some boarders who were renting the rooms that weren’t being used. So I rented the ‘red room’ and for privacy’s sake I would lock my door at night. The same thing as before happened. I awoke with a gasp and shot upright in bed. The room was cold (it was winter this time though, so not unusual), seeing the same figure who I’d again thought was my male cousin. Since I’d fallen asleep rather early while watching a movie it wasn’t impossible that I’d forgotten to lock my door and he’d come in. I called out to him but he did the same thing, said nothing, just walked across the room and into the closet. Because I had told him about what my cousin and I had seen a few years earlier I thought maybe he was pranking me. So I got up and turned on the light. Nothing in the closet except my clothes. I was really freaked out so I went to go downstairs, but my door had been locked the whole time!