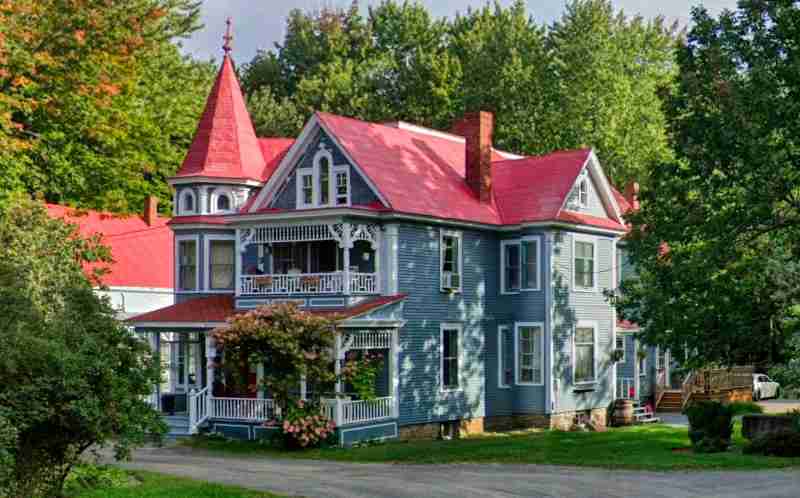 On Fredericton’s Waterloo Row stands a somber grey Victorian mansion called Boyce House, which is claimed to be home to one very friendly and helpful ghost.

By the 1960s Boyce House had seen better days. The grand old mansion had been recently converted into a men’s residence for University of New Brunswick students. According to author Carole Spray in her influential book of NB folklore ‘Will O The Wisp,’ one night the Don of the residence was woken up by a piano playing. 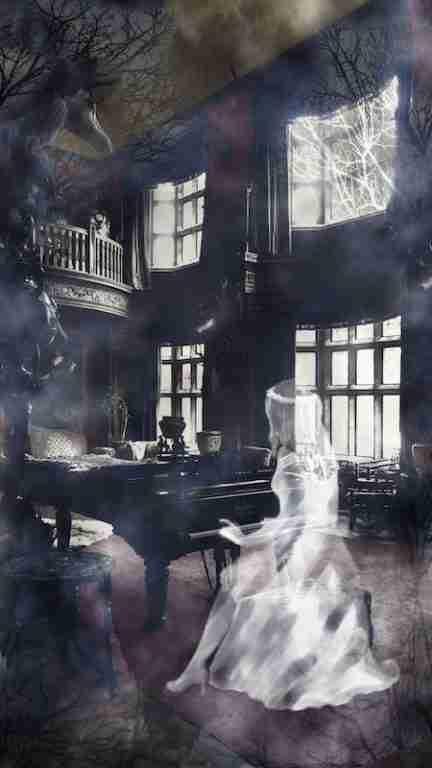 Annoyed, he shouted “I don’t know which of you idiots is banging on the piano, but don’t you know what time it is?”

The playing did not stop, so he went downstairs. But when the piano came into view, there was nobody there. When he turned around, there was a strange grey lady floating on the staircase. He recounted: “when he turned to look at her, he realized the creature was not made of flesh and blood.”

The Don, who’d had some religious training with the Anglican Church, cried out: “in the name of the Father, the Son, and the Holy Ghost, I command you to tell me who you are and to state your purpose!”

“To his immense surprise,” wrote Spray “the ghost replied that she was looking for a letter. She wanted him to open a safe in the kitchen and see if it was there.”

The old mansion had been built decades earlier by Mae Boyce. Her husband was Walter Boyce, who donated the equivalent of half a million dollars in today’s money to start Fredericton’s beloved Boyce Farmers Market.

Walter Boyce immigrated from Norfolk, England in 1886, at the age of 16, bringing with him his 9 year old brother. They received a land grant on what was then the outskirts of Fredericton, called Salamanca, and planted a turnip farm.

In Salamanca, Walter met a farmer’s daughter named Mary Harding Leonard, who everyone called Mae. In 1894, when Walter was 23 and Mae was 27, they were married.

The Boyces realized that they could make vastly more money shipping their turnips all the way up to Montreal and selling them there than they would selling them locally, which quickly evolved into a successful produce export business.

Now quite wealthy, they moved to downtown Fredericton. Walter was elected Alderman (City Councilor), and newspapers urged him to run for bigger and better political offices.

However, in October of 1910 their house burned down. Mae had been alone inside when the fire broke out, and barely managed to escape. The Boyces became more introverted and reclusive after Mae’s brush with death, and Walter abandoned his political aspirations.

They moved back to Salamanca, where they bought land at 467 Waterloo Row. Extremely unconventionally for the time, the land sale’s paperwork was not signed by Walter, but by Mae Boyce.

In 1913 construction was completed on the opulent mansion called Boyce House.

In 1961 Boyce House was sold to UNB to be a mens residence. The day after his ghostly encounter, The Don called a house meeting. Much to his surprise, the other residents each admitted they’d all encountered the ghost before.

One had seen the ghost in the kitchen, rummaging through their mail. He described her as “white and strong and formed a definite human shape … but it was like a mass of energy … like the energy that comes across on a television set.”

Other students mentioned spooky happenings, like objects and furniture being moved around, doors opening and closing in the night, and ghostly silhouettes drifting around Boyce House.

They also claimed that the residence ghost would tidy up in the night, hanging up clothes and cleaning the young men’s apartments.

The students decided to search the kitchen for the safe.

They tapped on the walls, listening for a hollow spot.

Sure enough they found one, tearing off the newly installed wood paneling covering it.

Like the ghost had said, behind it was a safe.

However, it turned out that the safe was empty.

In the years that followed, the haunting of Boyce House became well-known, with many people claiming to have encountered the ghost.

A 1984 Telegraph-Journal article by Shaun Waters notes “she has a soft-spot for young males and likes to moonlight as their maid. Male tenets … have been known to wake up tucked into bed. Others have had their pants hung up and their apartments cleaned overnight.”

By the 1980s, the ghost was famous enough to be featured in some distinctly-less-than-prestigious publications like the American supermarket checkout tabloid Weekly World News under lurid headlines like “kindly granny haunts this house” and “little old lady doesn’t know that she’s dead!”

That newspaper claimed to have interviewed a 21 year old named Jennifer, who said: “The ghost puts our covers on if we kick them off at night. My roommate Joanne woke up one time after someone ran their fingers through her hair saying “it’s alright dear, it’s alright.” She’s kindy and maternal, but she frightens us.”

In 1981 the television ghost-busters of Amityville Horror fame came to examine Boyce House. According to the Telegraph-Journal, “they declared her harmless, but tenets were warned not to have seances, Ouija boards, or Tarot cards.” They claimed that Boyce House’s otherwise friendly ghost wished to be left alone, and would react with hostility to being contacted.

If there is a ghost, based on the timeline of inhabitants of the house, it is likely Mae Boyce.

Mae had lived in Boyce House with their servants, her husband Walter, and his younger brother, Thomas.

Perhaps Walter and Mae’s inability to have children themselves led them to be protective of Thomas, or perhaps it was his own tragic history. In 1906 his child died. In 1921 he suffered life changing injuries working in the woods in Napadogan. His eyesight deteriorated badly. He was so sickly that the Daily Gleaner newspaper reported on four separate occasions that he was on his deathbed.

Mae and Walter both died soon after one another in the early 1950s, leaving Thomas alone for the last decade of his life. When his health was good, he was active at Christ Church Cathedral, arranging their flowers. Most of the time though he was sick in Boyce House.

Perhaps Thomas had a supernatural caretaker in his sickly final years. And just maybe that ghost continues to care for people who live in Boyce House today. Happy Halloween!