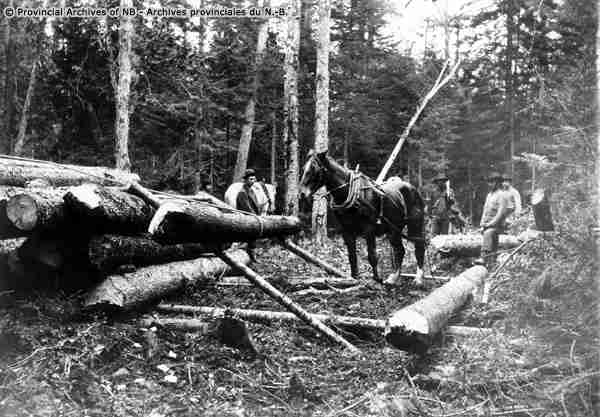 In 1935, a group of lumberjacks were having a night of cards and music at their camp outside Alma. One among them was an accomplished fiddle player, and her had been supplying the musical entertainment for the party. As bedtime drew near – every morning was an early morning in the logging camps, and so every night was ended early as well – he placed his instrument in it’s case on the floor by his feet. Just then, three distinct notes sounded from the untouched fiddle; high, low and high. All assembled knew this as an ominous sign. These were long time lumbermen, well versed in the traditional folklore, and they knew a forerunner when they heard one.

Forerunners are still, even today, well embraced by many New Brunswick folks. It’s believe that the natural ability to sense a forerunner is rather common among the Maritime people, a skill inherited from Irish and Scottish ancestors. So what’s a forerunner? Perhaps a more familiar name would be a premonition but differentiated in that forerunners, supernatural signs of upcoming events, are almost exclusively portents of doom. In the case of our lumbermen and the noisome fiddle, the three notes were a recognized sign that someone from the camp would not live to see another sunset.

And so it came to pass. The next day, the loggers headed out into the woods under grey skies. As they worked, thunder sounded in the distance, increasingly close, but not near enough to stall the day’s labours. Bringing down a large tree was on the day’s agenda, and the method chosen required a logger to climb partway up and clear branches first. It was this unfortunate man who was to fulfil the forerunner’s warning; as he worked, lightening struck the tree, knocking it to the ground and crushing him beneath the heavy trunk.