Fredericton has a long history of movie theatres, beginning in 1907 with the “Wonderland” and the “Nickel”, and continuing with the “Palace”, the “Carleton” and the “Bijou”.

Whittier Fenety opened the “Unique” motion picture theatre in the Masonic Hall on Carleton Street in 1908 and, with his son William (Bill) opened the “Gaiety” theatre on the ground floor of the nearby Anglican Church hall in 1913. The “Unique” and the “Gaiety” amalgamated in 1917 and reopened as the “New Gaiety” in a newly constructed building on Queen Street.

Following a disastrous fire in 1939, the third “Gaiety” continued in business in a new 900 seat theatre on the same Queen Street site. 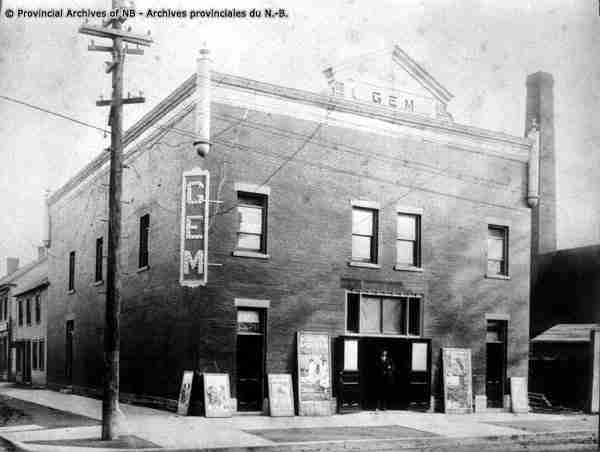 Established in a renovated tenement building in May 1910 by David M. Richards, The “GEM” Theatre had a local orchestra to accompany the silent-screen movies it showed.

Fred G. Spencer of Saint John leased the “GEM” in 1917 and made extensive renovations to create a modern theatre with a seating capacity of 451.

After a disastrous fire in December 1919, Spencer built a much larger theatre, the “Capitol”, on the same site. It opened in 1922. Eight years later it was purchased by Witter Fenety and remained in business until 1973.

Over the years Fredericton had a lot of theatres including The Nashwaaksis Twins, PlazaCinemas, and the Empire Theatres.

Fredericton also had its share of Drive-Ins Theatres including the “Brookside Drive-In”, the “Sunset Drive-In” and the “Valley Drive-In”.