1885 was a time of transition for bridge design when the first bridge was opened to carry Carleton Street across the Saint John River in Fredericton.

The strength of columns had traditionally been judged on the basis of some old lab tests, for example, but there were still “glaring discrepancies and contradictions [in the] rules and tables in common use by builders”. The proper design of beams was also poorly understood and, by 1872, many designers still viewed mathematical models for bending as unreliable.

Furthermore, bridge design had been strictly in the hands of bridge builders. Owners had little control over the strength or functionality of the builders’ designs. This began to change in about 1880 when a “specification disease” broke out and owners began to take greater responsibility.

The early days of bridge building were also shaped by the materials that were available. Timber and masonry were the only bridge materials before the introduction of iron. Steel did not come into common use until the 1880s when the industry was forced away from iron by some spectacular bridge collapses.

Several bridge configurations became popular in the early days, and one of those was the Burr truss which combined a timber arch with a timber truss.

Theodore Burr’s design was not ‘engineered’ in the modern sense. However, it had worked before and so it was repeated over and over again and became common. Many of the Burr trusses in New Brunswick were covered bridges, so the passerby might not be aware of how they were put together and how common they were.

And so, in 1884, New Brunswick’s Premier Andrew Blair determined to build a bridge at Carleton Street to link the city to Alexander Gibson’s industrial and railway empire across the river.

There was a torrent of opposition to Blair’s plan, with some people arguing that it would ruin the ferry operators. Others worried that it would divert traffic away from the city core, or that it would simply wash away with the spring floods. Blair was determined to build the bridge at the earliest opportunity, however, and called tenders in the fall of 1884 before funds had been approved by the legislature. He then snubbed the federal government and went ahead without their approval to build over a navigable waterway.

The project was mocked as ‘Blair’s Paper Bridge’. In 1885, Mary Pengilly published Fredricton Bridge, A Prophetic Warning which she was inspired to write “[upon] reading of the proposed bridge in the St. John papers brought to me by my son while imprisoned in the Provincial Lunatic Asylum.”  In her view, “the proposed Bridge brings so forcibly to mind that time of dread and anxiety for the safety of Fredricton, that I cannot refrain from giving expression to my thought and feelings on the subject. If the people of Fredricton would consider this matter in a natural and impartial manner, they would not for the sake of money that would necessarily be expended at that time, run the risk of destroying the city by placing a bridge where, if built with sufficient strength to resist the force of the ice in ordinary seasons might in a time like the Spring of ’78, hold the ice and assist in forming a dam that could not fail to flood the city, if it did not sweep it entirely away.”

Design methods were in transition, and Premier Blair wanted the bridge built quickly. It is therefore no slur to wonder what it meant that the bridge was designed by Alfred Haines, with the superstructure being engineered by A.G. Beckwith, and the completed design being constructed by Simmons and Burpee. Alfred Haines was from Saint Mary’s and was a second generation bridge builder with several structures to his credit. He was not an engineer, but was accepted for the project because he was on provincial staff as an inspector and associated with engineers who were clever and knew about bridges. A.G. Beckwith was a city engineer in Fredericton. My guess is that Haines and Beckwith did a conceptual layout and that Haines determined the sizes of some timbers based on experience and judgment. Haines probably outlined the piers (substructures), since Beckwith is specifically credited with engineering the superstructures (spans). Simmons and Burpee would then have devised whatever other details were required. 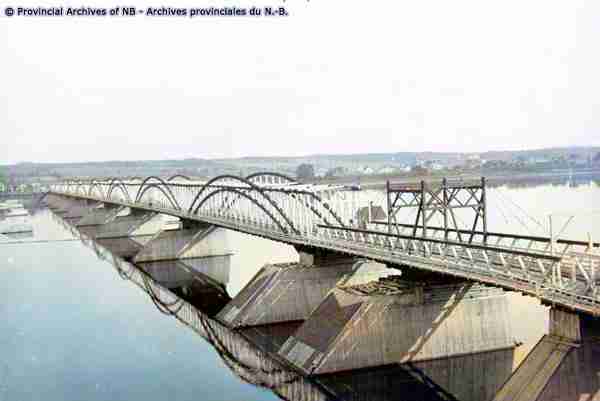 Carleton Street was extended to the waterfront and construction began. Stone for the piers was brought from Spoon Island, and the bridge was opened on November 27, 1885, only two years after it had been proposed. It included a swing span for the passage of boats. 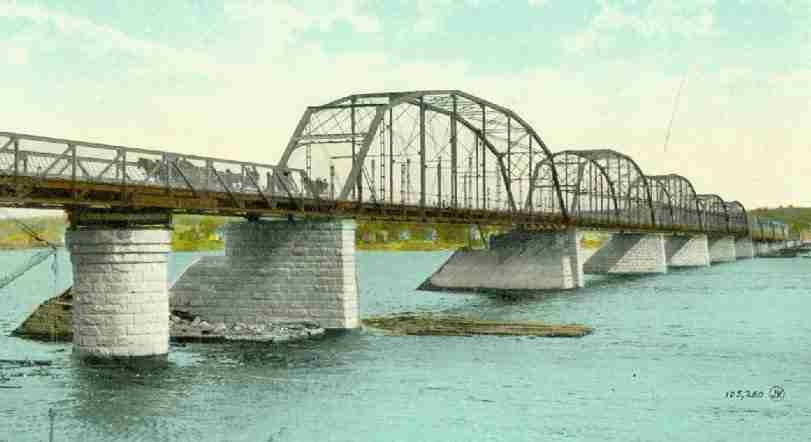 Small fires often broke out on the bridge deck, and were usually blamed on discarded cigars. There was a full time attendant who kept the deck clear of combustibles, so that fires were usually small and easily extinguished. One such fire started on Saturday evening, July 15, 1905 and, within only a couple of hours, two spans were destroyed and fallen into the river. These two spans were replaced using steel trusses and, over the next couple of years, other spans were replaced until all of the Burr trusses were gone in 1909.

This modified bridge was torn down in 1982 when the Westmorland Street Bridge opened. The piers remain in the river. 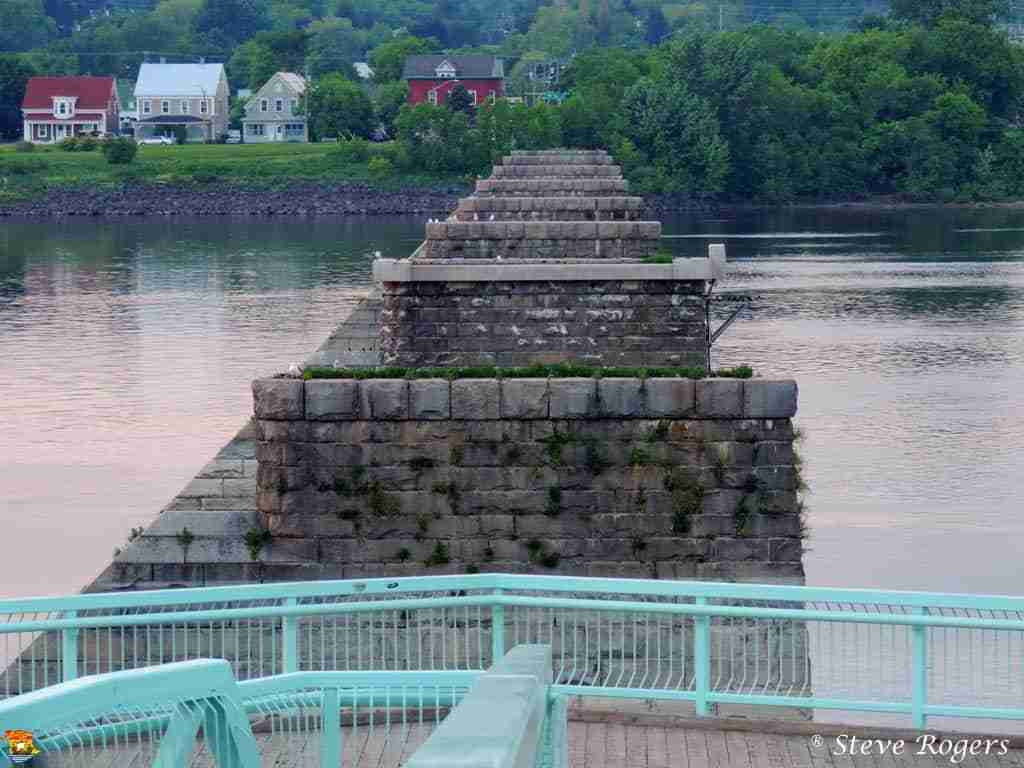 Fredericton’s First Bridge across the Saint John River
By JohnWood1946@hotmail.com