Germain Street Baptist Church is located on Germain Street within the Trinity Royal Preservation Area of the City of Saint John and is designated a Local Historic Place. 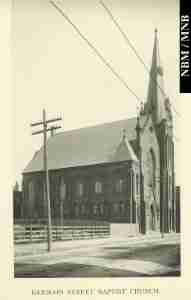 Many of the buildings of Germain Street were constructed in the latter part of the 19th century or early 20th century as all the older buildings were destroyed in the Great Saint John Fire of 1877. Although each is unique, several of the churches built within a few years of the fire shared a number of Gothic Revival architectural features. Germain Street Baptist Church, as well as St. Andrew’s Kirk and several others, make a significant contribution to ecclesiastical architecture of this period. Built in 1879, Germain Street Baptist Church is a good example of Gothic Revival religious architecture from the rebuilding period in Saint John after the fire. The use of this style reflected a strong desire to preserve a tradition of church architecture that persisted throughout the nineteenth century. Germain Street Baptist Church exhibits such Gothic Revival elements as a tower, hood moulding with corbel stops, as well as segmented and Gothic arch door and window openings.

Germain Street Baptist Church is also recognized for its presence as a significant religious and educational center in the City of Saint John. First established in 1818, the original structure burnt down in the Great Saint John Fire of 1877. Plans for reconstruction began almost immediately afterwards. By 1879, a church building designed by Dewar Architects to replace the former church was erected on the corner of Germain Street and Queen Street at a cost of $47, 000. It continued to expand as a center of religious and educational life. It operated a private school on its premises for several years. In 1968, a large section of the Church was replaced by a new structure.

In 2011 the church closed its doors because of a dwindling congregation and bank account.