The family-owned business began with the enthusiasm of one man who arrived back in Fredericton more than 100 years ago.

His name was Odber M. Hartt and he was born in Fredericton in 1852. By the time he was 22, he and his wife, the former Miss Loretta Kilburn of Kingsclear, had left for the United States, where Hartt found success in the shoe trade. He became foreman and superintendent with some of the leading American shoe factories and, according to newspaper editorials, he became a gentleman thoroughly versed in the manufacture of boots and shoes. 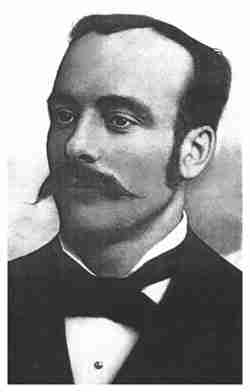 The Hartts settled in New York, where three sons and two daughters were born. They often returned to New Brunswick for visits and, when they came in the summer of 1893, Odber arrived with an ambitious plan.

He expressed surprise that Fredericton did not have a shoe factory among its industries, believing that such an enterprise could be quite profitable for the city. As evidence of his faith in the idea, he would put $10,000 of his own money into it, if $30,000 more could be subscribed locally.

“The old race course across from the train station on York Street would make a splendid location,” he said.

There was also exemption from civic taxation for industries not already established, the possibility of free water from the city, and the advantage of a large supply of leather from several Fredericton tanneries.

Hartt made it clear that the majority of the 300 proposed jobs would go to young local residents-two-thirds male, one-third female. Their combined weekly payroll would range from $800 to $1000, paid every Saturday night subsequently benefiting other businesses in the city.

By the fall of 1895, Hartt, still realizing the potential of a large factory returned and submitted a prospectus—-to the Fredericton Board of Trade this time estimating a capital of $50,000.

Three more years passed and although no factory commitment had been reached, the Hartts came back to New Brunswick in the spring of 1898.

Following the birth of their third daughter in Fredericton they decided to stay. Hartt was fully convinced that he could get the support he needed and, in a long letter to The Daily Gleaner, he was persuasive.

“I would like to see my old native place possess a fine, large shoe manufacturing business, one that we all could be proud of.”

The factory would be called The Fredericton Shoe Company and it was proposed to make Hartt the superintendent.
The site was selected the city architect was engaged. It was hoped to have the building up and covered in “before the snow flies.” Hartt thought he could now relax and breathe a sigh of relief. Or could he? 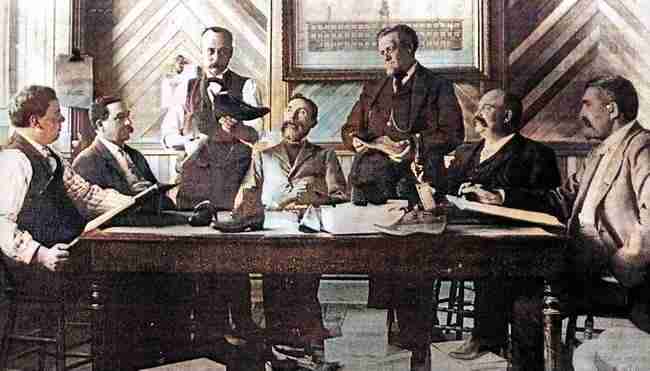 When 20 of the shareholders met on Oct 10, there appeared to be signs of unrest. Fortunately, Hartt was able to calm his shareholders and anyone else who had doubts about the factory and its financial situation. His enthusiasm and encouragement never diminished as he continuously kept on the move. “It was said he was like a blackfly in fishing time-nobody knew where he would light next.”

In the time, Hartt was off to Upper Canada where he made “a very careful investigation” of the leading shoe factories, discovering that all leather was imported from the United States with a high duty. For the first two weeks in November, he was in Boston, visiting many of the large shoe factories in that city. He inquired about the latest methods and learned about new machinery. He also took the occasion to look for skilled operators to come to Fredericton as foremen of various departments. And he was convinced that the right kinds of shoes to make were those with the finest grade and the highest class. 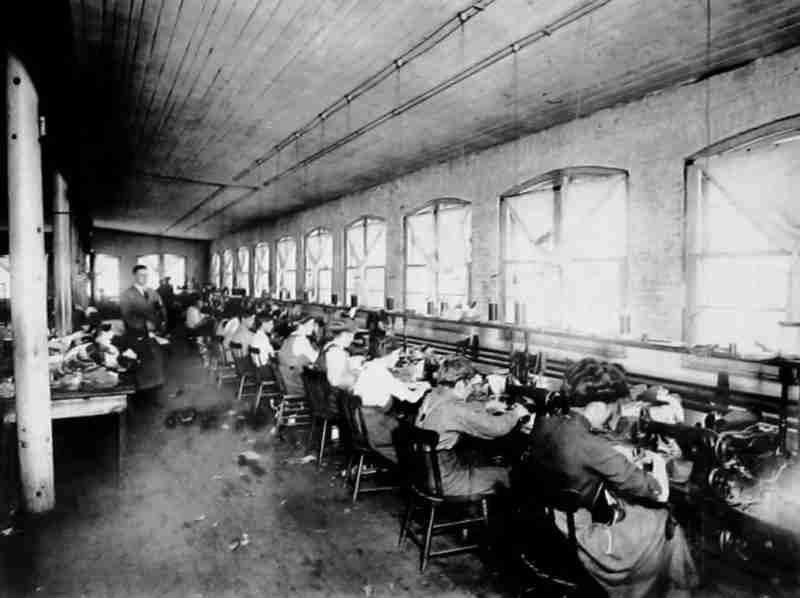 By the end of November, the first floor joists were on and the floor was being laid, so as to keep the snow out of the basement. By May 1, carpenters were rushing to finish the second floor while another crew was installing two large steel boilers in the engine house. By mid-May, the roof was being placed over the third floor while bricklayers were finishing the walls. Final total-one-half million bricks.

After 30,000 feet of kiln-dried hardwood were laid over the rough floors on each level, several schoolboys were hired to whitewash the interior, before the machines arrived from New England in June. A corps of experts was to be present for the installation, all arranged by Hartt.

The final touches included a flag-staff for the main tower, from which the Union Jack would be flown; a two-story vault, built in connection with a suite of three offices in the northwest corner of the first floor; the installation of an elevator and a generator; the dismantling of the scaffolding for the 65-foot chimney; and plans for a railway siding, so the product could be transported easily.

During the summer, crowds of curious citizens and out-of-towners visited the factory, and were given tours by the energetic Hartt himself. From the basement, with its new concrete floor, where the rubber footwear department was to be located, to the stitching room on the third floor, where the “uppers” of all the shoes were to be made, the onlookers were astonished. 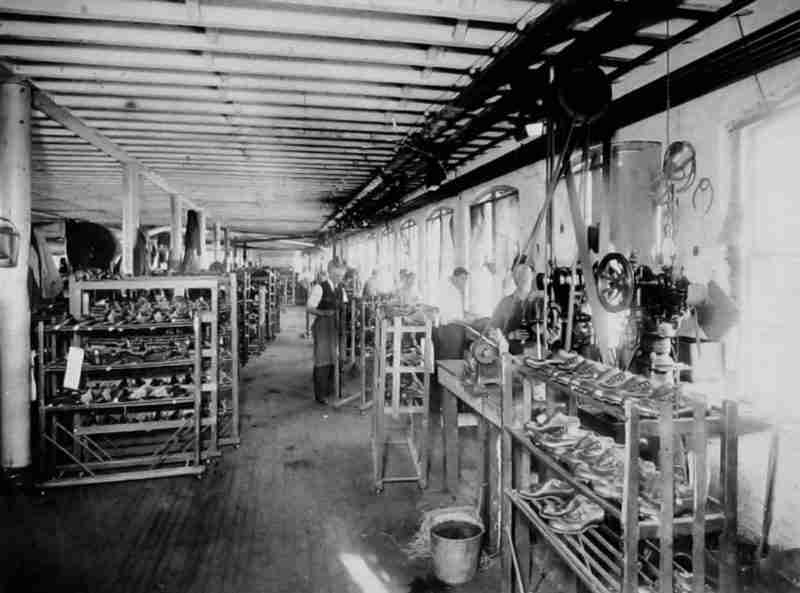 Tuesday morning, July 26, 1899 the steam was turned on the actual work upon a line of shoes commencing the next day. Young men and women of Fredericton were at various machines, receiving instruction from the skilled operators who had been imported. A century first-class boot and shoe manufacturing had begun.

The first 2,500 pairs completed the end of August were samples for the firm’s travellers to take on the road. Two months later, they were called home because they had placed as many orders for Spring as the company could produce. The Hartt factory was on its way to become Canada’s best shoemaker. 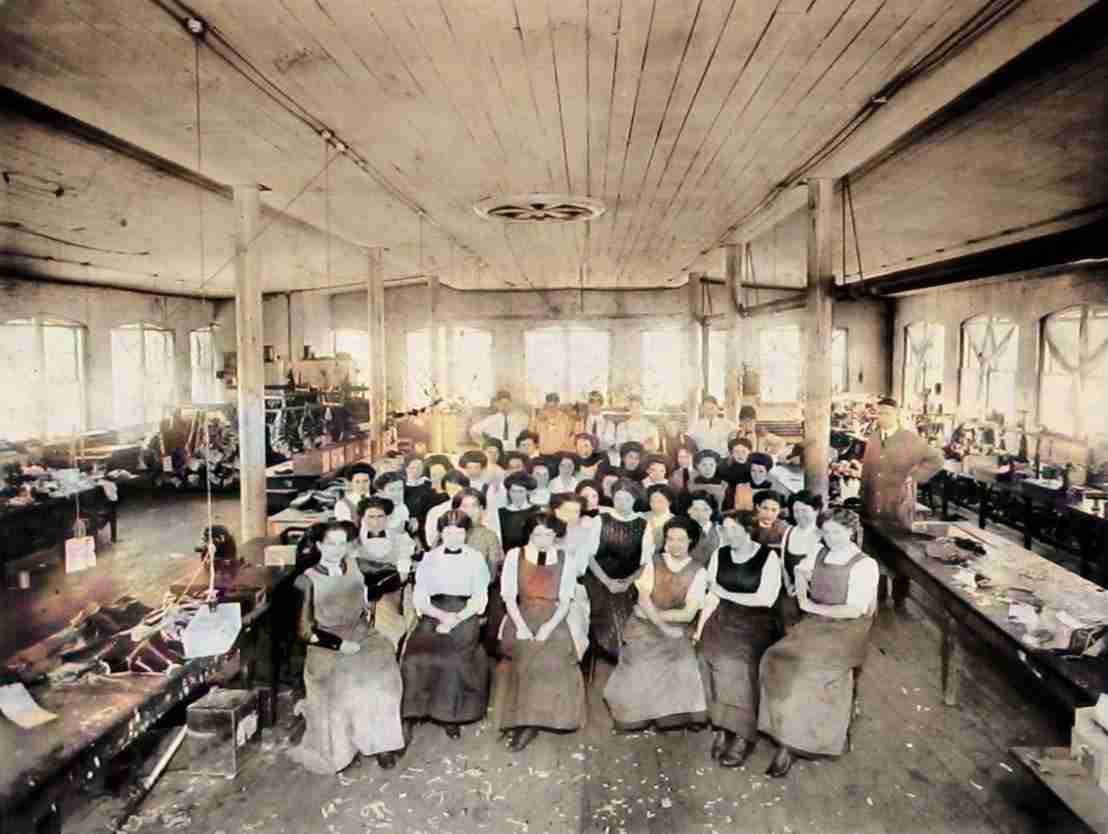 By Christmas, 1899, the total output for that Fall was 11,000 pairs the first month of the new century. By Christmas 1900, 9,000 pairs were produced per month by the staff of 300, which included Hartt’s two sons. By Christmas, Frederictonians were wearing Hartt Boots and Shoes with pride and the Hartt trademark was featured in store windows across the country.

By the end of 1901, there were employees manufacturing 1000 pairs daily and the company made its first shipment to England. In 1903, employee counts was almost 500, the daily production number was 2000 pairs.This factory produced boots for the military during both world wars and the “Strathcona” boot for the RCMP. The founder’s dream had been realized.

Unexpectedly, in 1904, Odber M. Hartt tendered his resignation, disposed of his holdings, and left Fredericton as suddenly as he had arrived. He returned to the United States and became associated with one of the largest Boot and Shoe concerns in Indiana.

The business he started in Fredericton continued to grow and prosper, giving secure employment to young people and substantial profits to shareholders. Even when other companies took over, the Hartt named stayed and was a constant reminder of high standards until the end of the century closed the factory.” The factory closed in 1999.