Henry Braithwaite was born in 1841 near Fredericton. He was the son of Alfred Braithwaite, a native of England who married Sarah Flinn of New Brunswick.

From his boyhood, Henry Braithwaite followed the life of a woodsman, his mentor being the legendary Maliseet guide Gabriel Acquin, a frequent visitor at the home in which he was living. “I stormed him with questions about game and hunting,” Braithwaite said, “and finally got in his favor enough to get trips to the woods with him.” His first assignment, at age 13, was as Acquin’s assistant on a hunting trip up the Nashwaak River by Lieutenant-Governor John Henry Thomas Manners-Sutton* and two companions. After a day they discovered they had forgotten their keg of rum. Braithwaite was sent to fetch it on his toboggan. “I tell you I was a proud boy when I heard the party cheering,” he recalled of his return. “I thought they were cheering me then. Afterwards I thought maybe it was the keg!” At 14 he took a job cooking in a lumber camp. His later pattern of employment was to trap and hunt in the fall and spring, take labouring jobs in the summer, and work in lumber camps in the winter, but the combined proceeds were insufficient to support his family. In 1882 land surveyor Edward Jack trained him in surveying and the techniques of lumber cruising, and for several years Braithwaite offered his services to lumber firms. It was not until 1889 that he was able to pursue his favourite activities of guiding, hunting, and trapping full-time.

In the early 1870s Henry Braithwaite had blazed a trail north from the Southwest Miramichi River in York County through dense woods to the lakes at the head of the Little Southwest Miramichi. In this largely unexploited hinterland, he started a hunting and trapping business in 1874 and was soon employing several assistants. They hunted in the fall, trapped in the winter, and bagged black bears in the spring. In the 1880s bears were the most profitable part of the business, as furriers in England strove to meet the demand for the bearskin busbies that were being adopted for regimental uniforms.

In his account of his expedition to the Little Southwest lakes in 1883, Jack referred to Braithwaite’s “old hunting camp” near a stream named the Crooked Deadwater. This was the base of his trapping operation. Along his traplines, which reached out towards the Rocky, Clearwater, and Burnthill brooks and the headwaters of the Dungarvon and Renous rivers, he had erected windproof lean-tos with fireplaces for overnight lodging or use in stormy weather. In Jack’s opinion, Braithwaite was not only a successful trapper but “without doubt . . . the best hunter in New Brunswick.” Later observers concurred, remarking on his ability (like that of the great aboriginal hunters) to follow animal tracks over hard, dry ground, his masterly use of the birchbark horn to call moose, his survival and travel practices, his regimens for preserving food and preparing meals, and his commitment to conservation at a time of widespread indifference to animal welfare and the environment. In several reports, his strengths of character and personality are also noted. “He is not only the most expert of woodsmen and hunters,” stated Professor William Francis Ganong*, “but a courteous gentleman as well.”

In the 1890s the hunting and sport-fishing industry in New Brunswick came of age. Because of his expertise and unparalleled knowledge of a vast region rich in fish and game, Uncle Henry, as he came to be known, was in the forefront of its development. The “doyen of New Brunswick guides” led a party of colleagues to an early sportsmen’s show in Chicago. In 1899, when the New Brunswick Guides’ Association was formed, he was elected president. Word of his “magical sporting kingdom” spread rapidly thanks in no small degree to the many writers among his clients. Frank H. Risteen of Fredericton, a frequent hunting guest, mythologized him in the popular press of Canada and the United States. American journalist Frederic Irland, who first visited in 1894, recounted his experiences in Scribner’s Magazine (New York). In 1902 Emerson Hough of Chicago used a stopover at the Crooked Deadwater as subject matter for an article in Forest and Stream (New York). Five years later Ralph Pulitzer of the New York World, his wife, and a servant arrived with much ado to spend five weeks with “the great white hunter.” When he attempted to arrange a visit, Thomas Martindale, the author of With gun and guide (Philadelphia, 1910), was astonished to learn that his services were booked three years ahead. One of Braithwaite’s closest literary friends was York County native Charles George Douglas Roberts*, who, in preparation for his well-known nature stories, had turned to him for advice on animals. Roberts acknowledged his debt by dedicating Red Fox (Toronto, 1905) “To Henry Braithwaite, Master of Woodcraft.” Setting aside his disdain for absurdity, Braithwaite stated that “if Charlie Roberts put an elephant in the New Brunswick woods, I would enjoy reading his story about it.” Braithwaite’s own literary talents were modest in comparison with those of such guests, but he penned some short pieces on forest life that played a part in popularizing his name and promoting his business.

His hospitality was extended as well to many non-literary figures, including Lord Hawke and other trophy hunters from Britain. Among the American businessmen introduced to the lakes at the head of the Little Southwest was George Dupont Pratt of New York, who in 1909 erected one of the most elaborate summer retreats in the province on the shores of Holmes Lake. “I’ve had ’em,” Braithwaite stated, “lords and dukes from England and millionaires from the United States, more than I can ever remember. Some of them were the best of sports; some were not.” One who was not was a finicky Englishman who insisted that his bathtub accompany him into the woods, and whom Braithwaite allegedly dubbed His Royal Queerness.

Although Braithwaite’s business was based at the Little Southwest lakes, his hunting grounds later stretched northward some 200 kilometres to the Nepisiguit and Restigouche river systems and beyond. “Henry has more houses than many a millionaire can boast,” claimed Frederic Irland in 1900. “Almost anywhere from the Dungarvon to the Matapedia, and from the mouth of the Miramichi to the head of the Temiscouata, you are within a day’s journey of one of his snug camps.” During his most vigorous time as a guide, Braithwaite said he had 22 camps in New Brunswick and several in Quebec.

For many years his activities were viewed with favour by provincial authorities, who saw that he was generating revenue and employment. After competitors started to jostle for a share of his business, however, legal challenges began to be exchanged. In 1907 Braithwaite touched off an unfortunate chain of events by having Arthur Robinson, a New York sportsman with a lodge on Holmes Lake, charged with killing game out of season. When the charge was not sustained at trial, Robinson had the same accusation brought against Braithwaite. His culpability was not proved, but he admitted that an American hunter he had guided had shot a caribou out of season. For failing to prevent or report this infraction, he was fined in 1908. The conviction was overturned the next year, but provincial officials nonetheless suspended his guide’s licence as “punishment” for having preferred the charge against Robinson. Intense jealousies had been aroused and large egos bruised, making the rights and wrongs of the dispute difficult to ascertain.

In the fall of 1913 Braithwaite had as his guest the Earl of Kingston, a big-game hunter. When they came out of the woods for Christmas, friends gathered to celebrate the 60th anniversary of Braithwaite’s shooting his first caribou. Kingston presented him with a purse contributed by Canadian, American, and British sportsmen, and congratulatory telegrams were read, including one from Irland addressed to “Henry, King of Guides and Prince of Men.” He was now in his seventies and his reign was drawing to a close. In subsequent years he often trapped and hunted alone. Once, in 1920, he was away for so long that a search party was sent to find him, which it did, alive and well in a camp 43 kilometres from the nearest settlement.

Among the last articles published about Braithwaite during his lifetime was one based on an interview he gave at his daughter’s home in 1924 to Kate Haws Miles for the Halifax Sunday Leader. “There is nothing about his personal or physical appearance,” she wrote, “except the eyes which are so alive and so bright, to proclaim seventy years spent in the open. He seems no more ill at ease in the quartered oak and plush upholstery of his daughter’s parlour than would any man who has his own pet arm chair or rocker in some snug corner. But when one searches deeper and listens to the quiet philosophy of the man, then one realizes that he is different. There is more than a touch of Thoreau about him. . . . A simple directness, a scorn of subterfuge, a penchant for accuracy that is almost an obsession reflects the natural environment and the companionship of the dwellers in the silent places.”

More than 75 years after his death in 1927, the legend of Henry Braithwaite is still robust, and there are several tangible reminders to be found of his legacy. One of the last woods cabins he occupied is on exhibit at the Central New Brunswick Woodmen’s Museum near Boiestown. Many of the names of natural features within his former domain were assigned by him in memory of guests and employees. His own name is perpetuated by Braithwaite Lake in Stanley Parish and Braithwaite Mountain on the boundary between York and Northumberland counties. 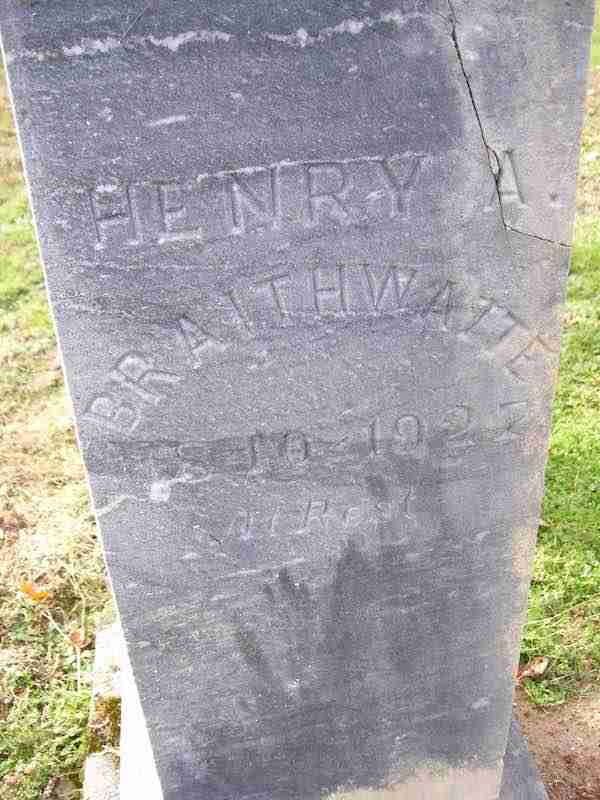 Henry Braithwaite died in 1927 and is buried in the Fredericton Rural Cemetery.