Hotel Paulin was the first hotel constructed in Caraquet in 1891 and is located on the waterfront in the centre of the village. It is a beautiful, yet rare example of living- breathing history of early Acadian architecture, as it proudly stands today, preserved and restored to its’ original simplicity. It is recognized as an important landmark to this region and is one of the oldest family operated hotels still remaining in Canada.

Originally a two-story structure, it was built by Hughues Landry and designed by Nazaire Dugas and it was first named Hotel Vandome. Two years later, the hotel was sold to the Blanchards and was re-named Hotel Blanchard. In 1907, Octave and Annie Paulin purchased the hotel and it became Hotel Paulin. Octave, an ambitious man, expanded the Hotel by adding a third story, making it one of the tallest buildings of its time on the Acadian Peninsula. Leo Paulin, one of 16 children born to Octave and Annie, took over the hotel with his wife Eva in 1941. Eva Albert was the daughter of Pierre Albert, the owner of the neighboring hotel, Château Albert, built in 1909. In 1955, Château Albert was completely destroyed by accidental fire. Château Albert has been re-constructed and is part of the Historical Acadian Village.

Eva Paulin was the driving force behind the hotel operations for many years. She single handily ran the hotel after the death of her husband in 1959 and continued until 1972, when her son, Gérard, left his job with Air Canada, to join her. Over the yeas, Eva catered to the business travelers. Known as an excellent cook, Eva gave Hotel Paulin its reputation of offering the best meals on the Acadian Peninsula and offering comfortable accommodations with a special blend of hospitality.

Eva died in 1972 and her son Gérard Paulin has been operating and restoring the hotel since. In year 2000 the long-time bachelor was joined by Karen Mersereau and soon after by a young son, Jules Gérard, now the fourth generation of Paulins. Together they have continued with the restoration of Hotel Paulin and have achieved a Canada Select four-star rating. In 2003, they added four 5-star luxury suites on the third floor offering spectacular views and sunsets of the Bay of Chaleur. The dining room has had a long time standing reputation for excellent cuisine and fresh local seafood. Karen, the Hotel’s Executive Chef, specializes in creating original recipes from regional foods and uses only the freshest, local ingredients.

Today, Hotel Paulin is being operated as an up-scale boutique-style hotel and dining room, preserving its historical charm, elegance, and innkeeping spirit of an 19th century. Innkeepers, Gerard Paulin and Karen Mersereau welcome you and the many guests from around the world to share in the rich Acadian history and culture. 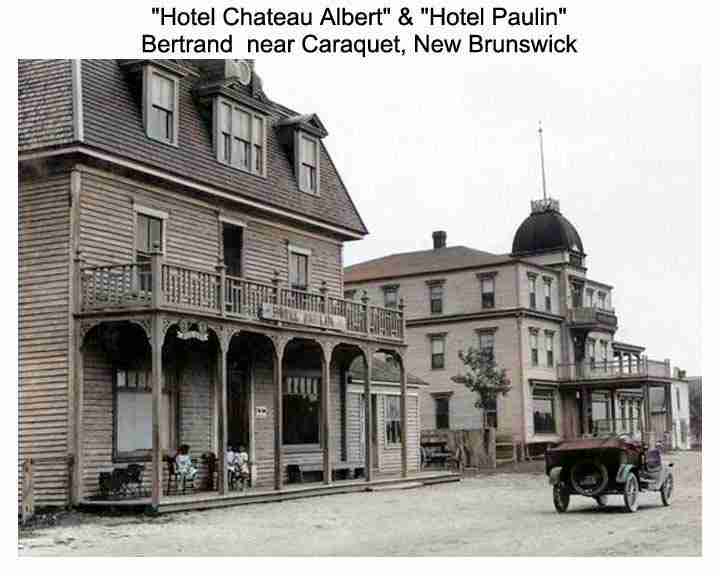 One thought on “Hotel Paulin – Caraquet”