Sitting on the edge of the forest, along the lightly-travelled road between Fredericton and the mining town of Minto, are the remnants of a Second World War Internment Camp B70. 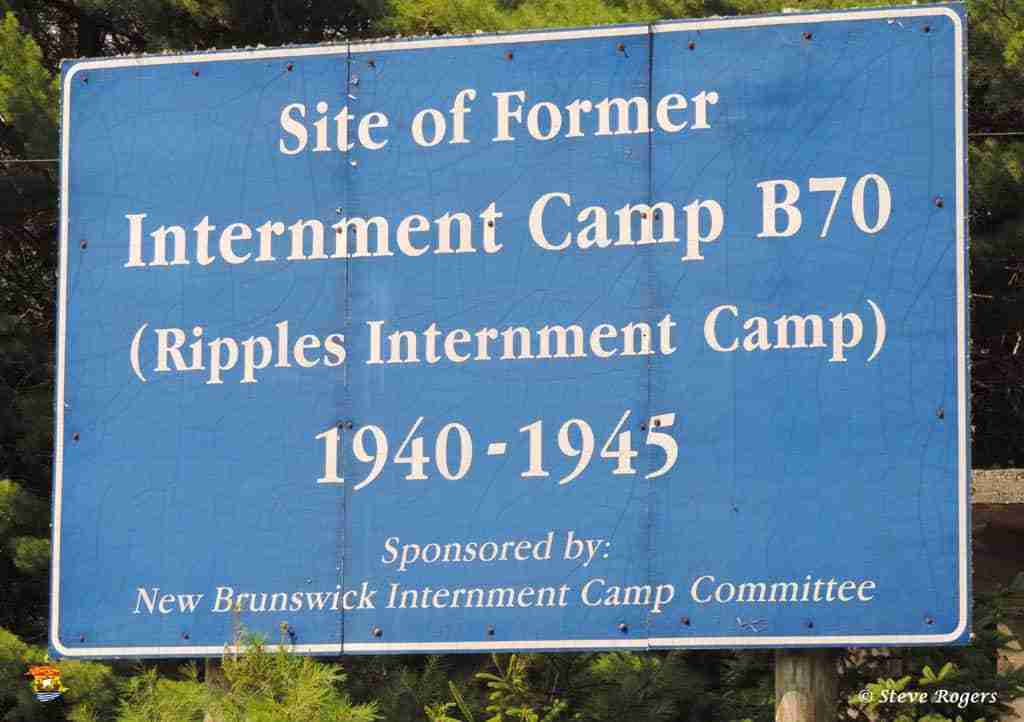 The decades-old crumbling concrete structure in Ripples offers a rare glimpse of the front that emerged here at home.

Beyond the cement water tower base near the road is a marked trail, guiding visitors around what used to be a bustling community, complete with guards toting machine guns.

The 22-hectare site had been a relief camp during the Depression before it opened in 1940 as an internment camp, one of 26 in Canada and the only one in the Maritimes. 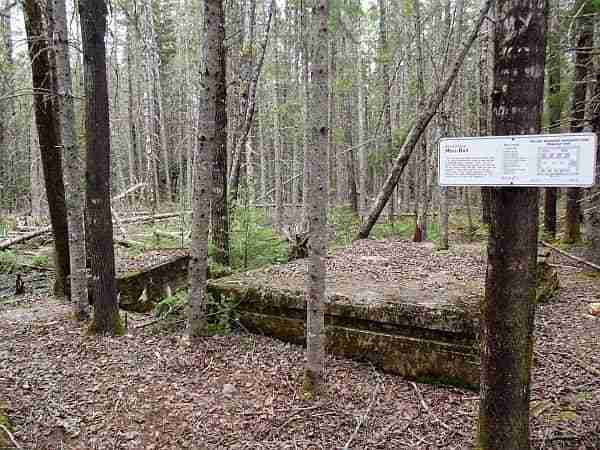 Originally, B70 Internment Camp was home to German and Austrian Jews who fled the Nazis. Later, it became a prisoner-of-war camp. Regardless of its role, few knew it existed. The internees were housed in army barracks and spent their days cutting the 2,500 cords of wood required each year to keep the 100 wood stoves in the camp burning. They wore denim pants with a red stripe on the leg, and denim jackets with a large red circle on the back. There were six machine-gun towers positioned around the perimeter of the camp.

Fifty-two buildings once stood at the site, housing almost 1,000 men at any given time. 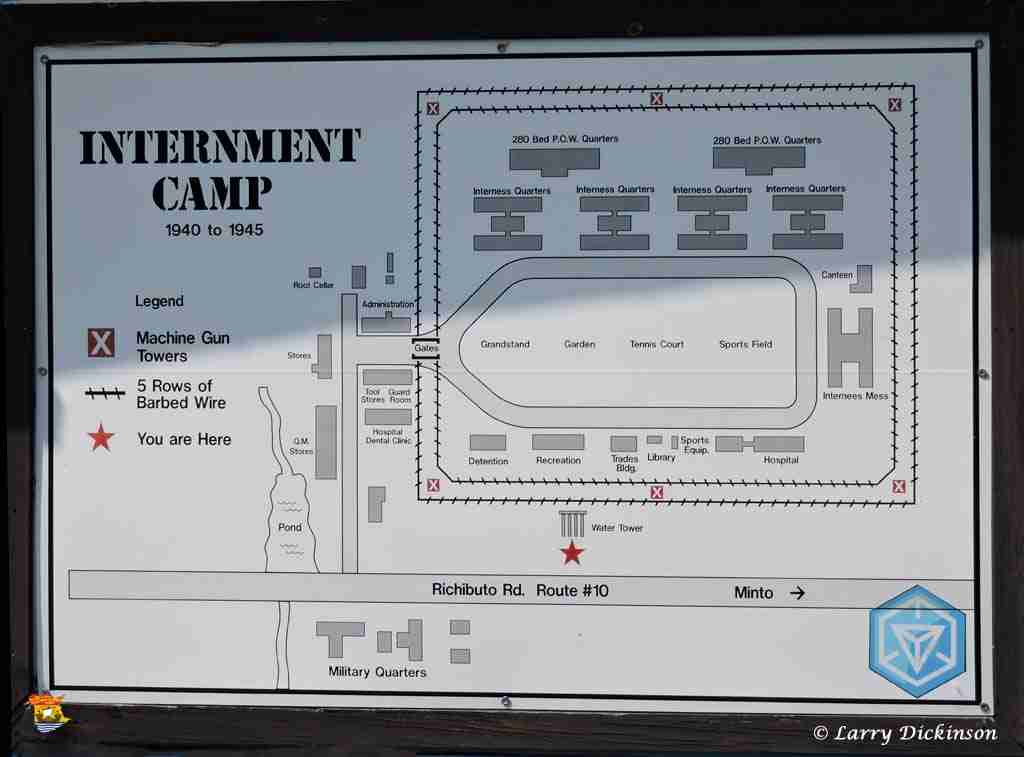 Former British prime minister Winston Churchill was worried there could be spies among the Jews, and he asked Canada and Australia to house them as internees. B70 Internment Camp was closed in 1941 for three weeks to prepare for prisoners of war. Over the next four years, the camp would house 1,200 captured prisoners including German and Italian merchant marines as well as Canadians who spoke out against the war. Group portrait of male internees at the internment camp in Fredericton, New Brunswick. The camp was also known by the name Camp Ripples. Italian Canadian internees who were being detained at Camp Petawawa were transferred to Camp Ripples in July 1942. The internee standing at the far left is Felice Martiniello lived in Sydney, Nova Scotia before his internment. “Internment Camp”, from the collection of Otto Thierbach, internee at the Fredericton, N.B., Internment Camp, c. 1942. This is probably a photo of internees. Otto Thierbach, stonemason, emigrated from Germany to Canada in 1928 and settled in Montreal, where he worked as a stonemason. During the 1930s he joined the “Deutsche Bund” and worked as “Bund” organizer for eastern Canada until 1939, when he was interned at the Fredericton Internment Camp until 1945. Interestingly, the Bund did not have formal associations with other Canadian fascist organizations such as the National Unity Party. The RCMP began to arrest Canadian Bund leadership in September 1939 the first month of World War II in Europe. By May 1940, 400 key members were interned in detention camps. ( http://en.metapedia.org/wiki/Deutscher_Bund_Canada ) Library and Archives Canada, Online MIKAN no. 3193874

“There were tunnels dug and examples of that, and there was one really quite interesting case of a group of U-boat captains who were there, U-boat officers who spent most of a year organizing an escape. The Germans even sent a submarine that spent a week off of North Point, P.E.I., waiting for them”. The camp was set in rural New Brunswick on purpose, to help deter escapees.

These German navy officer PoWs were directed to escape, travel by whatever means possible the 250 kilometres (150 miles) to Cape Tormentine, NB, somehow cross the Northumberland Strait to PEI and make their way to North Cape, where if all went well, a German U-boat would be waiting.

The U-262 was there. It arrived off North Cape on May 2. It hovered around the east of the Island until it left on May 6.

But the rescue fell through because the escape never happened. “Broke off search in accordance with orders. It is a pity that I must return without succeeding,” a disappointed Captain Heinz Franke recorded in his log before leaving North Cape on May 6th, 1943.

Located at the back of the Hermitage Cemetery in Fredericton, near the St John River, in Division “D” Tier 60, is the grave of Merchant Seaman Nicola Sciancalipore of the Italian Navy.

He had been interred in the Ripples Interment Camp during World War Two with the POW number 59678. Born in Italy on 9 February 1891, he died of a coronary thrombosis at the camp on 6 November 1944.

There were also two German internees buried at the Hermitage cemetery. Both died of natural causes.

By May 1971 all of the German POWs (including 2 from Fredericton) were relocated and buried in the new German War Graves Section of Woodland Cemetery, in Kitchener, Ontario.

A special ceremony was held to commemorate the completion of the project and to pay respect to the men whose eternal slumber had been so rudely interrupted.

Relatives of the POWs – over two hundred of them – had been flown to Canada from Germany by the German government for the service. When the camp closed in 1945, the 52 buildings at the site were sold and moved as far away as Fredericton.

Fronting upon the south side of Union Street in Fredericton, and situated adjacent the old Gibson Roundhouse, is a former internment camp building. This single-storey building, previously located at the Ripples Internment Camp, was moved to this site in 1947.

The former internment camp building located at 880 Union Street was designated a Local Historic Place for its historic association with the Ripples Interment Camp. Originally configured as a medical facility, the building was constructed about 1940 to treat patients at the Ripples Internment Camp.

Note: The building was moved to Maugerville. A businessman bought the structure and will use it for equipment storage.

Today the buildings are gone and a dense forest has risen in their place. For more information on the camp, visit the NB Internment Camp Museum in Minto.