In 1884 Albert Saunderson built this 3-storey structure, which fronts on the west side of Church Street. Architect RC John Dunn designed this Second Empire Style dwelling for hardware merchant James S. Neill. This massive dwelling occupies a corner lot at the apex of Church and Charlotte Streets in Fredericton.

The heritage value of this dwelling resides in its expression of Second Empire Style design as conceived by RC John Dunn and realized in the craftsmanship of Albert Saunderson. Value is also associated with James S. Neill’s ownership of this structure as a family home and its subsequent uses as both a wartime military hospital and a hotel in the postwar period.

Albert Saunderson, prolific local builder and contractor, constructed this house upon RC John Dunn’s design. While Mr. Saunderson erected a number of private dwellings in the town plat, he also constructed the Boat & Bicycle Club (formerly located on the Green near the Burns Statue) in 1895, Hoegg’s Canning Factory that same year, and the clubhouse for the Tennis Club in 1903. RC John Dunn drew the design plans for the Departmental Building located on St. John Street, and redesigned the second floor interior of the Legislature in 1896. With the design and building team of Dunn and Saunderson, considerable expertise went into the erection of this house. It is important to note that William Lawlor, who built the Provincial Legislature, had a hand in the construction of this substantial dwelling. Mr. Lawlor, who had considerable building credits to his name, laid the foundation for this elaborate dwelling.

In 1875, occasioned by the construction of the Fredericton City Hall building, it was noted in The Reporter that Fredericton exuded architectural “plainness” in its private dwellings; essentially, function prevailed over form. Examples of “stylized” houses in the city were relatively uncommon at that time. The author urged architects and builders to “combine the useful and ornamental.” Certainly, James S. Neill’s house at 255 Church Street fulfilled, if not exceeded, that architectural prophesy. Upon its completion in 1884, this house was credited with ushering in an era of modern housing design in Fredericton. 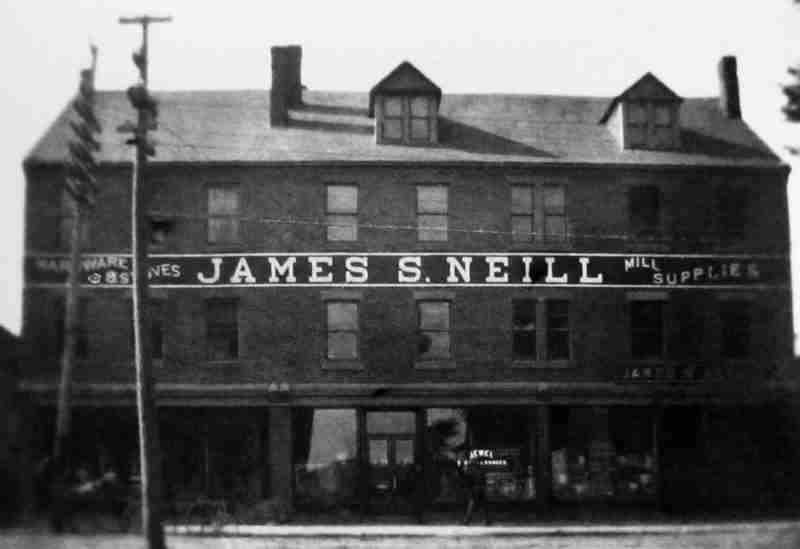 James S. Neill was the proprietor and operator of the well-known and family-owned hardware business. The son of John Neill, James assumed ownership of the business in 1879 under the name James S. Neill, or known simply as Neill’s hardware. 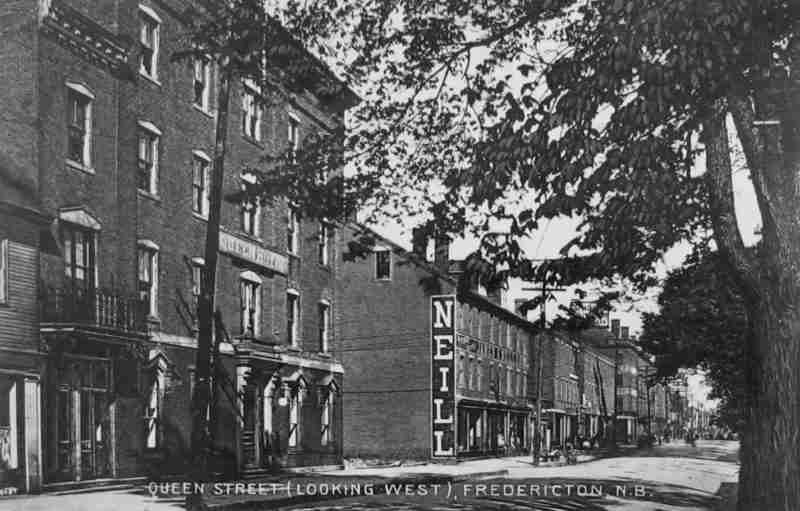 In 1910, two of James’s sons, John and J. Stewart, joined in the management of the family business under the new name, James S. Neill & Sons.

Many of Neill’s adult children settled along Church Street near their father. Son John Neill resided at 235 Church Street, while both daughters resided across the street – Mrs. Foster (née Agnes Stewart Neill) at 258 and Mrs. R.B. Hanson (née Jean Balfour Neill) at 270 Church Street. This house was also the site for both his daughters’ weddings, and after each ceremony, a “dainty luncheon” was served the guests.

For nearly sixty years, James S. Neill’s house and kindred carriage house were the only structures on the western side of Church Street between Charlotte and Churchill Row.

Due in large part to its size, this substantial structure has served functions other than private homeownership. During the Second World War, this house was converted to a military hospital. After the cessation of that conflict, this building under the ownership of Windsor Hotel Ltd served as the Homestead Inn. At present this building houses a number of apartments.

James S. Neill, who had considerable pride in his community, was a vocal member of the Queen’s Square citizen committee, which had been established in 1896.