Le Monument National Notre-Dame de l’Assomption in Rogersville was designated a Provincial Historic Site to celebrate the accomplishments of Monsignor Marcel-François Richard (1847-1915), educator, colonizer, and leader of the Acadian renaissance.

Mgr. Marcel-François Richard participated in the adoption of August 15 as the National Acadian Holiday, and was responsible for the design of the Acadian flag, and the choice of Ave Maris Stella as the Acadian national anthem. 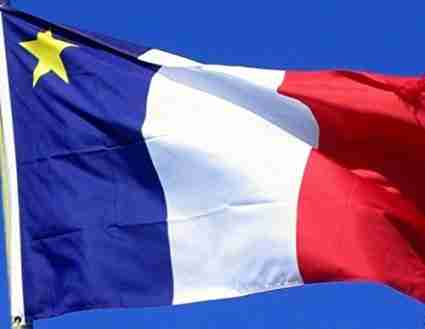 Mgr. Richard’s work in the field of education resulted in the establishment of many schools in Kent and Northumberland counties.

Mgr. Marcel-François Richard had the first monument built in 1912; to house a statue of the Blessed Virgin donated by the organizers of the Eucharistic Congress of Montreal (1910). The Monument was dedicated to the patron Saint of the Acadians. This Monument was destroyed by fire in 1969.

The current Monument was built in 1972 under the direction of Father Alban Albert. Mgr. Richard’s objective in building the monument was to provide the Acadian people with a place of pilgrimage and assembly. This site is a place of worship where pilgrimages and religious ceremonies continue to be held, including a novena of the Assumption leading up to the Assumption on August 15.

In Le Monument Notre Dame de l’Assomption’s Chapel, beneath a large mosaic of the Virgin of the Assumption, are the remains of Mgr. Marcel-François Richard.

An entrance arch to the parkland was erected in 1955 to mark the Bicentennial of the Deportation of the Acadians.

Our Lady of Lourdes Grotto – Saint-Louis-de-Kent