The Lorenzo Crosby Residence is located on Germain Street in Saint John. It was built in 1891.

Lorenzo Crosby Residence is designated a Local Historic Place because it is one of many heritage buildings in Trinity Royal Preservation Area. It is also recognized for being the home of two influential individuals: Ward Chipman Pittfield and Lorenzo George Crosby.

Most buildings in the preservation area were built within five years of the Great Fire of 1877. Although this Second Empire complex was built fourteen years after the fire the architecture of this building as well as the other Second Empire buildings along this residential area still reflect the re-building phase of the city. This residence is part of a four building residential complex. The complex also includes the Wetmore Merritt Residence, the T. William Bell Residence and the James Dewolfe Spurr Residence.

Chipman Pittfiel was the first owner of this home. He entered the wholesale house of T. R. Jones and Company. He remained with them until the failure of that company in 1888 when he took over the business under the name W. C. Pittfield and Company. He was president of the Exhibition Association.

Lorenzo George Crosby lived in this house from 1902 until his death in 1932. He was the founder of Crosby’s Molasses Company that is still operated today by his great-grandson. 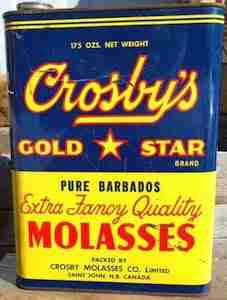 Some history… In 1879, at the tender age of 20, Lorenzo George Crosby opened a grocery business in the bustling port town of Yarmouth, Nova Scotia. An enterprising youth, Lorenzo quickly established himself as an entrepreneur in the import/export trade industry, transporting Maritime fish and lumber to the West Indies and returning with puncheons filled with that “liquid gold” known as fancy molasses. And so the Crosby Molasses Company was born.

In 1897, Crosby’s Molasses relocated to Saint John, a larger, more centrally – located harbour town. By 1911, Crosby’s had outgrown its place of business on Nelson Street and moved to Marsh Road – now known as Rothesay Avenue. Crosby’s is still supplying molasses and sweeteners to retail and industrial markets from those same Rothesay Avenue premises.