Louis Joseph Robichaud was born to Amédée and Eugénie “Annie” Robichaud on October 21, 1925, in the village of Saint-Antoine. From his first marriage to Lorraine Savoie of Néguac, he had three sons and one daughter: Jean-Claude, Paul, René and Monik. He later remarried to Jacqueline Clément, of Ottawa.

At the age of 15, he left home to enter the Collège Sacré-Coeur and Juvénat Saint-Jean-Eudes in Bathurst to study for a career in the Church. After his third year at the school, he decided instead to pursue a political career. He graduated in 1947 from Sacré-Coeur University with a Bachelor of Arts degree and went on to study economics and political science at Laval University. He then articled with a law firm in Bathurst for three years and, upon being admitted to the bar, practised law for a short period of time in Richibucto. 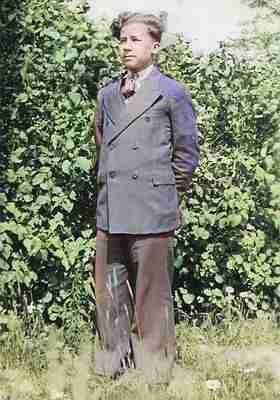 From the time he focused on a career in politics, he did not hide his ambition to become Premier. He even signed his contribution to his graduating class time capsule “Louis J. Robichaud, Premier of New Brunswick”. His first major step toward realizing his ambition was achieved when, at the age of 27, he was elected to the Legislative Assembly to represent the constituency of Kent County in the provincial election held in 1952. He was re-elected in 1956 and, from 1957 to 1958, he served as Financial Critic for the opposition.

In October, 1958, he was elected Leader of the Liberal Party of New Brunswick. In the following general election of 1960, his youthful goal was finally realized when he led his party to victory over Hugh J. Flemming’s Conservative government. On July 12, 1960, he was sworn in as Premier, the first Acadian to be elected to the office, and as Attorney General, holding that position until 1965.

His government was victorious in the general elections held in 1963 and 1967. In 1968, he assumed the portfolio of Minister of Youth, in addition to his duties as Premier. After a decade in power, his government was defeated in the 1970 election by the Hatfield-led Progressive Conservatives. In 1971, he resigned his seat in the Legislature and his position as party leader to become Chairman of the Canadian Section of the International Joint Commission. He continued in that capacity until he was called to the Senate of Canada on December 21, 1973. Robichaud retired from the Senate on October 21, 2000. 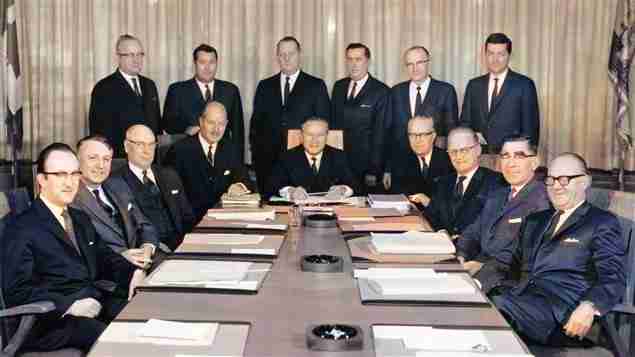 During his decade as Premier, his accomplishments ranked him, in the opinion of many, as one of the most important Premiers in New Brunswick’s history. His government initiated and legislated some of the most controversial and progressive programs ever introduced in New Brunswick which continue to impact the province today. The achievements of his administration include revised liquor laws, collective bargaining rights for the civil service, the establishment of a department of youth, the appointment of a provincial ombudsman, the adoption of a non-premium medicare system, and the vitalization of the province’s natural resources sector, particularly mines and forests. 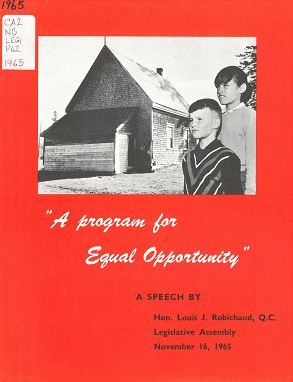 Perhaps his administration’s greatest achievement was the implementation of a massive social reform program known as the “Equal Opportunity Program.” The controversial program expanded the role of the provincial government by abolishing the county council form of local government and centralizing in the provincial government responsibility for education, hospital services, welfare, and the administration of justice. The program was implemented to ensure that all New Brunswickers had equal access to these services, which radically improved the lives of many people in the province.

Under his administration and his Program of Equal Opportunity, the provincial government’s revenues, expenditures, civil service, and influence over the lives of all New Brunswickers grew enormously. As well, public schools and hospitals were modernized across the province, in both depressed and prosperous areas, and a more equitable system of taxation was devised to finance those services.

His administration, more than any other government in the province’s history, was also responsible for providing Acadians with equal status and opportunity in the province. His government created the Université de Moncton to educate Acadians and foster their culture, and it passed the Official Languages Act, which made French an official language, thereby guaranteeing Acadians access to government services in French and increasing the number of Acadians employed in the provincial public service.

He was commissioned Queen’s Council and sworn in as a member of the Privy Council. He was also appointed Companion of the Order of Canada on June 25, 1971. Robichaud passed away in 2005.