Every November 11, crowds gather at New Brunswick Cenotaphs and war memorials to pay tribute to those who died in armed conflict. While the rites and rituals surrounding Remembrance Day are well understood, the monuments around which we gather and which dot the landscape are often forgotten.

These memorials are outward and visible signs of a nation in mourning. They are more than just granite slabs: Some of them are very large, intricate, and many were very expensive. One of the most interesting aspects of these memorials is the amount of money that was spent constructing them. In the 1920s, entrance to a dance might cost 50 cents, an overcoat would cost $45, and a brand new house would cost $5,000. The memorials in St Stephen, Saint John, Fredericton, and Moncton were erected at a cost of $20,000 each. None of this money came from any sort of government organization, it was all solicited from the general public. This shows the importance of these monuments to the communities and the people that built them.

The memorials were constructed unilaterally, with very little debate and very little controversy. In other cases, there was a lot of discussion and debate about what to do and where to put the monument. In some communities, there was pressure to build something “useful” like a hospital wing or a memorial building, in other cases, finding the right location was the sticking point in the community. Reading through old newspapers on microfilm is much more entertaining when various civic organizations are fighting.

In many cases, cenotaphs were organized by ad hoc committees. These committees were often made up of eminent citizens in society. The War Memorial Committee in Fredericton, for example, was chaired by Mr Justice Oswald Crockett, who later became a Pusine Justice on the Supreme Court of Canada. On his committee were, amongst others, Lady Ashburnham; John Richardson, the Lord Bishop of Fredericton; UNB Chancellor C.C. Jones; and the mayor. Despite the prominence of the various people on this committee, the records of it do not seem to have survived.

Other memorials were organized by women’s organizations such as the Imperial Order of the Daughters of the Empire, the Women’s Civic Council, or the Women’s Institute. Many of these women had sons, brothers, or husbands who responded to the call and went overseas to fight. The role of women during the war, for the most part, was to support the forces. This was done in a variety of ways: fundraisers, clothing drives, knitting bees, etc. My research shows that this role was continued into the post-war period. Even in communities where cenotaphs were organized by ad hoc committees, women’s groups were busy raising money, providing support, and contributing to the memorial funds. Surprisingly, veterans associations are largely absent from these narratives. The Great War Veterans Association, which was the largest of these veterans groups, was more interested in rehabilitation of returned soldiers and financially supporting the families of fallen soldiers.

One common feature of the majority of war memorials is an honour roll. Organizing committees spend a great deal of time and effort tracking down the names of all of the men from the area who died in the conflict. These names were then put onto bronze plaques and attached to the memorials. Fallen soldiers were not repatriated after the Great War, and so it was often impossible for families to go to the gravesites of their loved ones; these memorials, therefore, often became their graves.

These memorials are interesting not only for their role in commemoration, but because they are snapshots of the society in which they were built. The stories that surround these memorials are the stories of a community, their construction dominates the newspapers for months at a time, a great deal of public money was spent, and people took a vested interest in them.

From an article by Thomas Littlewood.

Not all New Brunswick Cenotaphs are included in our gallery, only the ones we have found on our travels so far. We will add others are we discover them on our travels. 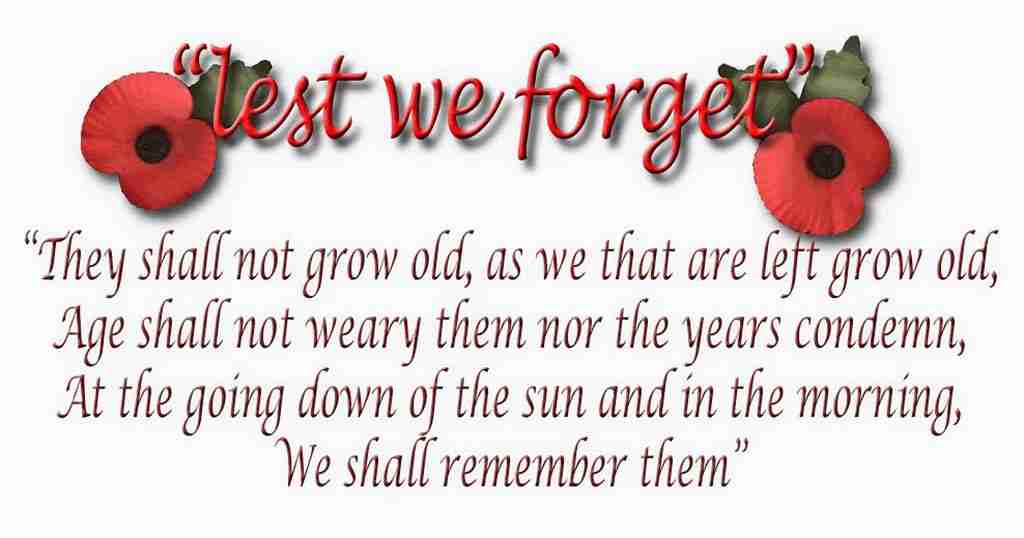 Fredericton bagpiper Peter McDougall was inspired by the Last Post Ceremony at the Menin Gate Memorial in Ypres, Belgium, where a lament is played every evening as a tribute to those who fought in the First World War.

Remembrance Day 2018 marked 100 years since the end of that War.

To mark the centennial, McDougall decided to gather a dozen volunteer pipers to play a lament at the Fredericton cenotaph every day for 100 days at 5 pm leading up to Remembrance Day.

Take up our quarrel with the foe
To you, from failing hands, we throw
The torch: be yours to hold it high
If ye break faith with us who die,
We shall not sleep, though poppies grow
In Flanders fields

Composed at the battlefront on May 3, 1915 during the second battle of Ypres, Belgium.

The next day, May 3, 1915, Sergeant-Major Cyril Allinson was delivering mail. McCrae was sitting at the back of an ambulance parked near the dressing station beside the Yser Canal, just a few hundred yards north of Ypres, Belgium.

Click on a thumbnail to see more cenotaphs from around the province.