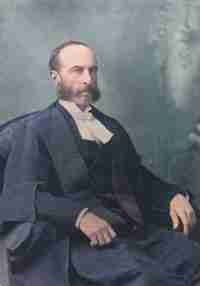 Landry was the first Acadian lawyer, provincial cabinet minister, judge and chief justice. Sir Landry was also the first and only Acadian to receive knighthood from a King of England. He was elected to the Provincial Legislature in 1870 to replace his father, notable pioneer Acadian politician Amand Landry. Sir Landry became a cabinet minister in 1878. On May 2, 1883 Landry gave a seven hour speech, the longest speech in the history of the New Brunswick Legislature, speaking mostly for the rights of Acadians. The following day he resigned as an MLA. Landry went on to become the Member of Parliament for Kent County from 1883 to 1890. In 1890, Pierre-Amand was appointed County Judge for Westmorland and Kent Counties and, in 1893, he was promoted to the Provincial Supreme Court. In December 1913, Landry was appointed as New Brunswick’s Chief Justice of the King’s Bench. In June 1916, shortly before his death, Pierre-Amand Landry was made a Knight of the Order of St. Michael and St. George by King George V of England.

Sir Pierre-Amand Landry House is also recognized for its association with cultural harmony and equality between Anglophones and Francophones. Sir Pierre-Amand Landry studied at his local French parish school, in the English Collegiate School in Fredericton and in the bilingual Saint-Joseph College in Memramcook. He was elected with the highest number of votes in Westmorland County in 1870, where two-third of the population was English-speaking and married an English-speaking Irish Catholic woman, Bridget Annie McCarthy. Landry encouraged English- and French-speaking people to live in mutual respect and tolerance.

The remarkable career of Sir Pierre-Amand Landry is the very symbol of the Acadian Renaissance of the late 19th century, illustrating both the awakening of national consciousness among the Acadians and the beginning of their consequent integration and participation in provincial government and administration. He was president of a group of Acadian leaders that organized the first three Acadian National Congresses and that successfully lobbied for the nomination of the first Acadian senator, Pascal Poirier in 1885, and the first Acadian Roman Catholic bishop, Reverend Alfred E. LeBlanc in 1912.

Landry House is recognized for its association with the New Brunswick Legislative Assembly Building. Landry, as Minister of Public Works, presided over the construction of the New Brunswick Legislative Assembly Building, which opened in February 1882. The project was completed in time and under budget. The sandstone used for this building came from quarries in Landry’s riding in the Dorchester area.