Loyalists fleeing the thirteen colonies during the American Revolution settled many communities in New Brunswick including St. Martins. Previously named Quaco, a derivative of a Micmac word meaning “haunt of the hooded seal,” St. Martins was the third largest shipbuilding center in New Brunswick in the 1800s, when over 500 vessels were launched there.

The New Brunswick government set aside £400 in 1834 for “erecting a Buoy, or Beacon on the Quaco Ledges,” near St. Martins, but the Commissioners of Lights for the Bay of Fundy gained approval the following year to use the funds to construct a manned lighthouse instead. Thrum Cap, a prominent ledge located off the headland west of St. Martins, was selected as the site, and work on the lighthouse was carried out in 1835. The first Quaco Lighthouse was an octagonal tower, painted in red and white horizontal stripes, with an attached dwelling, and could be reached by foot at low tide. Its lighting apparatus, employing six lamps backed by twenty-four-inch reflectors, revolved once every twenty seconds to produce fourteen seconds of light followed by six seconds of darkness. The weights that powered the revolving machinery had to be wound up every four hours. A bell struck by the machinery each revolution alerted the keeper that the light was functioning properly. 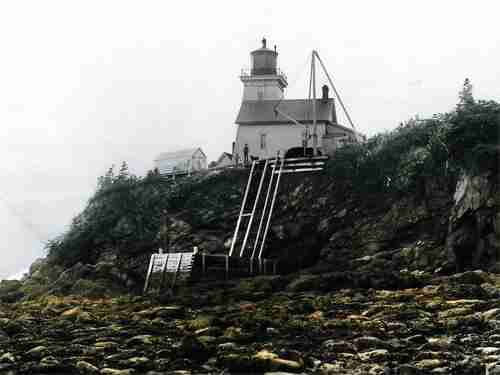 Captain Thomas Lamb, who was appointed the first keeper of Gannet Rock Lighthouse in 1831, was transferred to Quaco Lighthouse, where he had the honour to be its first keeper as well. Keeper Lamb originally received an annual salary of £100, but this was raised to £150 in 1841 due to the “great privations and dangers” presented by the offshore station and the inability to raise a garden or keep a cow there. In 1842, a severe storm carried away a portion of the rock on which the lighthouse stood along with two boats used to access the lighthouse. Keeper Lamb petitioned the government in 1844 and received £20 to replace his boats. The following year he was awarded £10 to compensate him for assistance he had rendered to crews of vessels that had been stranded near the lighthouse.

In 1846, a lumber breastwork was built on the crumbling rock by Messrs. McLaughlin and Stackhouse to protect the foundation of the lighthouse. Two years later, the height of the lighthouse was increased twenty feet to forty-six feet by enlarging the base of the tower and installing a larger lantern room. A new set of six lamps and silvered reflectors, imported from England, were installed in the new lantern in 1849, and the revolving machinery was replaced in 1850.

Keeper Lamb retired from the service on October 1, 1868, as he was no longer able to perform his duties due to his advanced age. His assistant, William Love, was appointed head keeper and granted an annual salary of $400, the same amount Keeper Lamb had been receiving.

The Saxby Gale of October 4-5, 1869, referred to as the “Tidal Wave” in the Department of Marine reports, caused extensive damage to Quaco Lighthouse. Repairs amounting to $298 were completed, but it was noted that the soft sandstone was rapidly wearing away, making necessary the relocation of the lighthouse to the mainland in the near future. Another severe gale in November of 1872 carried away a portion of the protection work surrounding the lighthouse, necessitating $730 in repairs.

The threat posed by the eroding rock must not have been too great as the tower was altered to receive a new lantern, lighting apparatus and revolving machinery delivered to the station on August 4, 1875. Messrs. Chanteloup of Montreal supplied these items for $2,469, and D. W. Clark was paid $3 a day to oversee the removal of the old lantern and the installation of the new. A temporary fixed white light was displayed until the new revolving light went into service on October 18, 1875. In 1877, a frame tower was built near the lighthouse to support a fog bell, which was struck every twelve seconds, when needed, by machinery that required winding every two hours. This new equipment cost $1,253, but allowed the nearby harbour to be made “with the greatest ease and safety both at night and during thick and foggy weather.”

It wasn’t erosion that did in Quaco Lighthouse in the end but rather fire. On June 17, 1881 a fire broke out in a defective flue between the ceiling and the roof of the keeper’s dwelling and completely destroyed all the buildings at the station. A temporary light, consisting of a lantern suspended at the top of a twenty-foot pole, was erected on the nearby headland known as West Head and placed in operation on July 9th. Five acres on West Head were acquired for $200, and a contract for the construction of a lighthouse was awarded to D.W. Clark at $2,890. 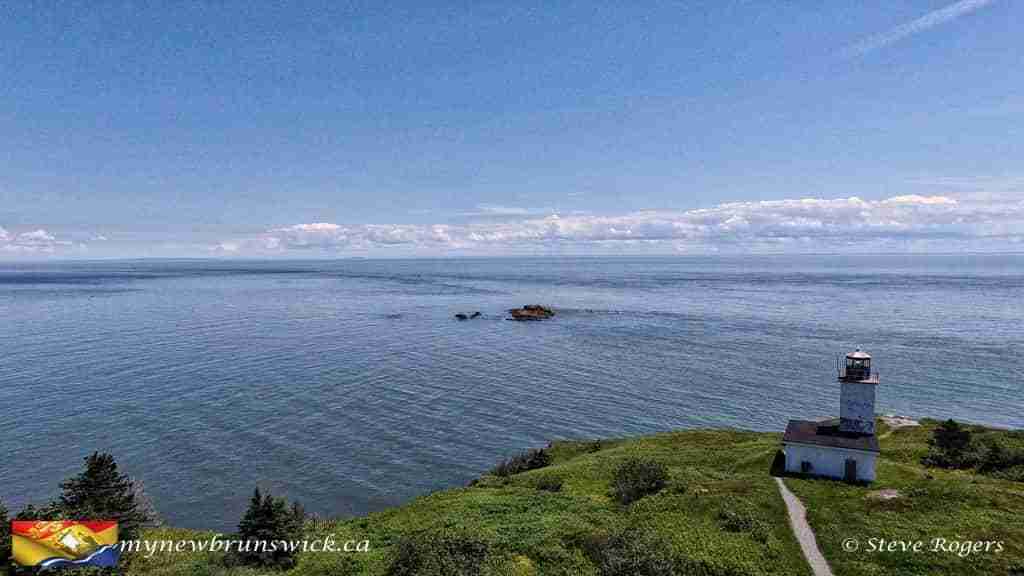 The new lighthouse stood 400 yards from the site of the previous one and consisted of a square, pyramidal tower, measuring forty-nine feet from its base to the vane on the lantern, and an attached keeper’s dwelling. A white revolving catoptric light was displayed from the lantern room for the first time on April 20, 1883. With a focal plane of 110 feet above high water, the light could be seen for sixteen miles. Keeper Love retired in 1884, and was replaced by Charles Brown. That same year, a landing block was constructed at the station to facilitate the receiving of supplies. A derrick was erected in 1918 along with a new landing.

Quaco Lighthouse had been without a fog signal since the fire of 1881, but this changed in 1886 when an iron bell-buoy was moored in sixty feet of water off the headland. A contract for $970 was also awarded that year to Thomas B. Carson for the construction of a fog alarm building at the station. This structure was completed the following year, and a steam-powered foghorn was placed in operation on September 1. Lorenzo B. Bradshaw was hired as the fog alarm engineer in 1887, but a new six-room dwelling for the engineer was not completed until 1906.

Leaks in the tower and dwelling in 1897 caused significant damage to interior railings and plasterwork, so new flashing was installed around the windows, at the base of the lantern, and where the dwelling joined the tower. The roof of the dwelling was also reshingled. A telephone, connected to the hotel exchange, was also installed at the station in 1897. The following year, one-inch pipes were laid to carry water from the top of a nearby hill to the inside of the dwelling.

The present Quaco Head Lighthouse was constructed in 1966 and consists of a square tower rising from one corner of a concrete fog signal building. The light in its lantern room produces a white flash every ten seconds, while the fog signal emits a three-second blast every thirty seconds, when needed.

The Bay of Fundy and its adjacent landscapes form a truly unique region of the world. The geological formations, terrestrial and marine ecosystems and the diversity of plant and animal species found here are unlike anywhere else on the planet. This, in concert with the rich history and cultural heritage of the area, make the region very special.

To acknowledge these unique and special features, the United Nations Education, Scientific and Cultural Organization (UNESCO) designated the New Brunswick side of the Upper Bay of Fundy as a World Biosphere Reserve in 2007.

The lighthouse is located on Quaco Head, part of the UNESCO Fundy Biosphere Reserve Amazing Places.