On Remembrance Day, crowds of people, young and old gathered at war memorials in New Brunswick today to honour and remember the Canadians who lost their lives fighting on behalf of their country in wars, military missions and conflicts. 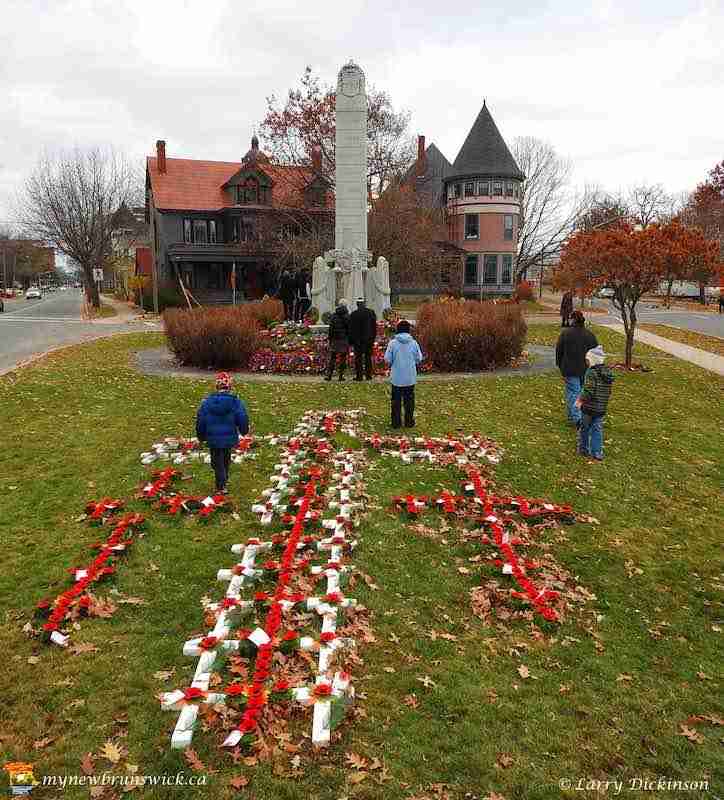 Very shortly after the end of World War I, a group of public-spirited citizens decided that some form of lasting memorial should be erected in Fredericton to honour those members of the community who laid down their lives for their country during the conflict. A committee was formed, called the Fredericton War Memorial Committee, under the chairmanship of Mr. Justice O. Crocket of the Supreme Court of Canada, formerly Member of Parliament for York-Sunbury, to study the matter and to transform the thought into action.

Dedicated on November 11, 1923 to the memory of the 109 Fredericton soldiers who died in WWI, the monument’s 14-foot tall white granite column is inscribed on all four sides with names of the battles in which they fought. The column is supported by a 26-ton carved stone base, said to be one of the largest blocks of cut granite in Canada. Similarly to cenotaphs across Canada, the Fredericton War Memorial eventually added inscriptions and names of the City’s soldiers who gave their lives in WWII and the Korean War. 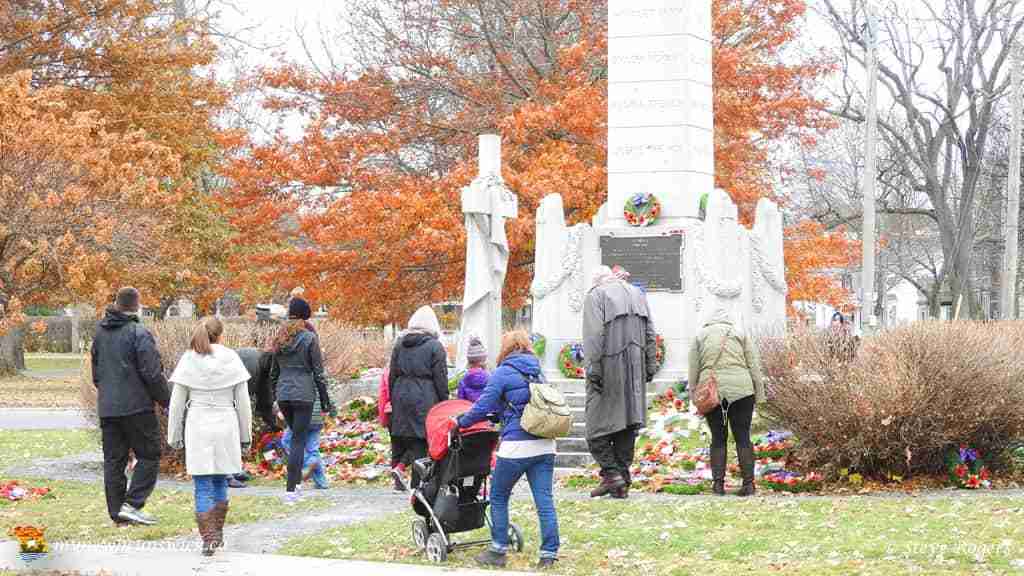 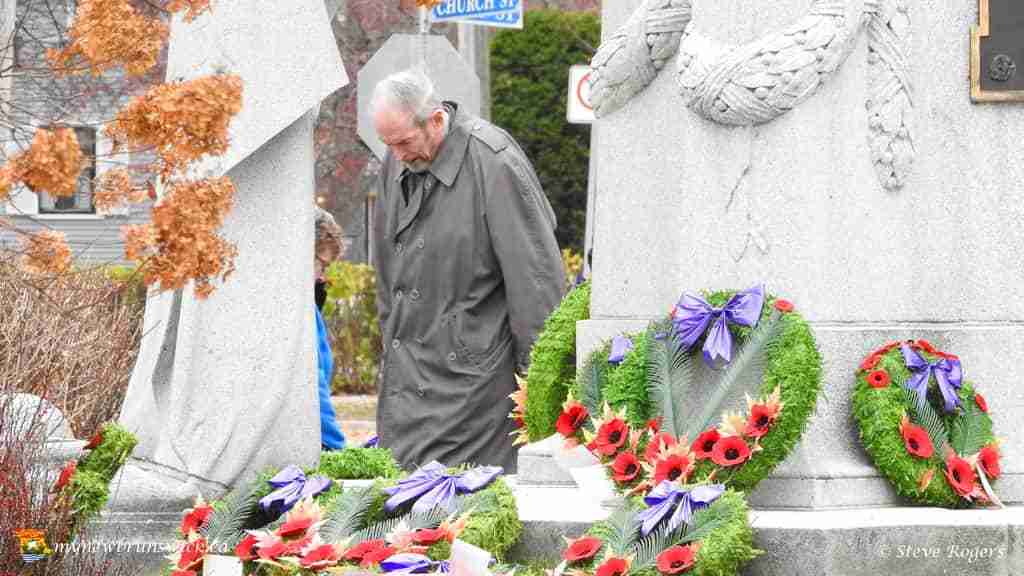 The Oromocto Cenotaph is a grey granite obelisk war memorial with several metal plaques attached, located in a grassed area on MacDonald Avenue in the Town of Oromocto. 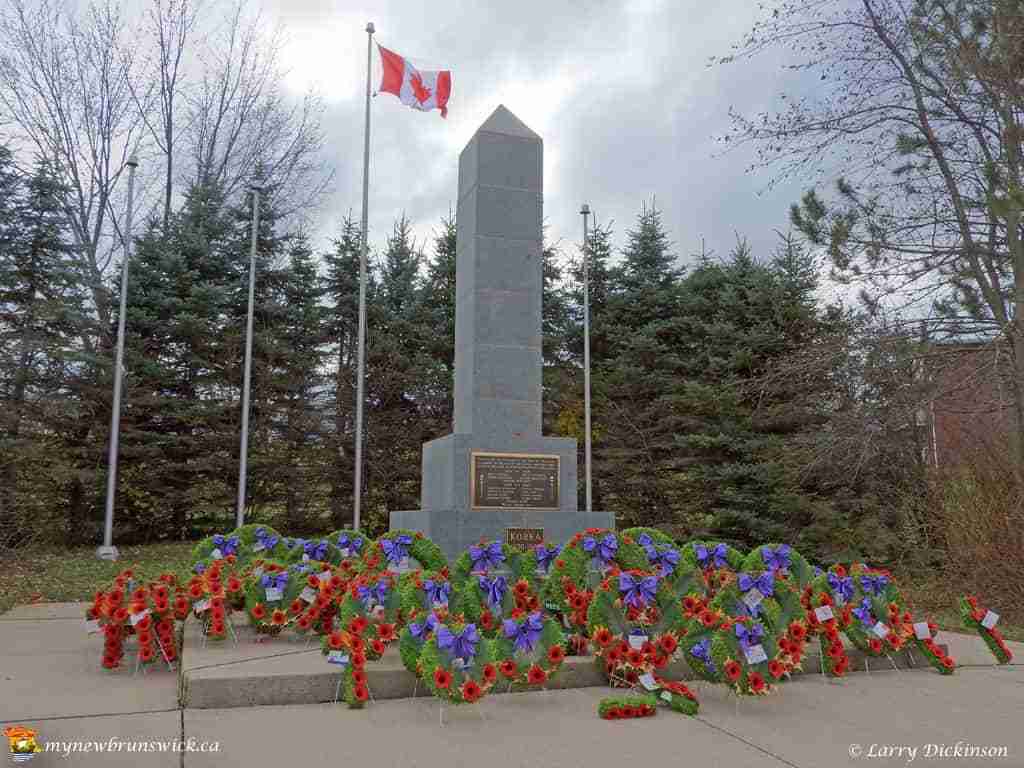 The Oromocto Cenotaph is designated a Local Historic Place for its importance in highlighting the military history of citizens in the Oromocto region.

Erected in 1963 by the citizens of Oromocto in a grassed park setting at the center of the town, the monument is a good example of the post-war stone monuments erected as memorials to the fallen soldiers of World Wars I and II, the Korean Conflict, and various Canadian Peacekeeping missions. Three bronze plaques are mounted at the base of the cenotaph listing these events, along with the names of the local fallen soldiers of Wars War I and II. 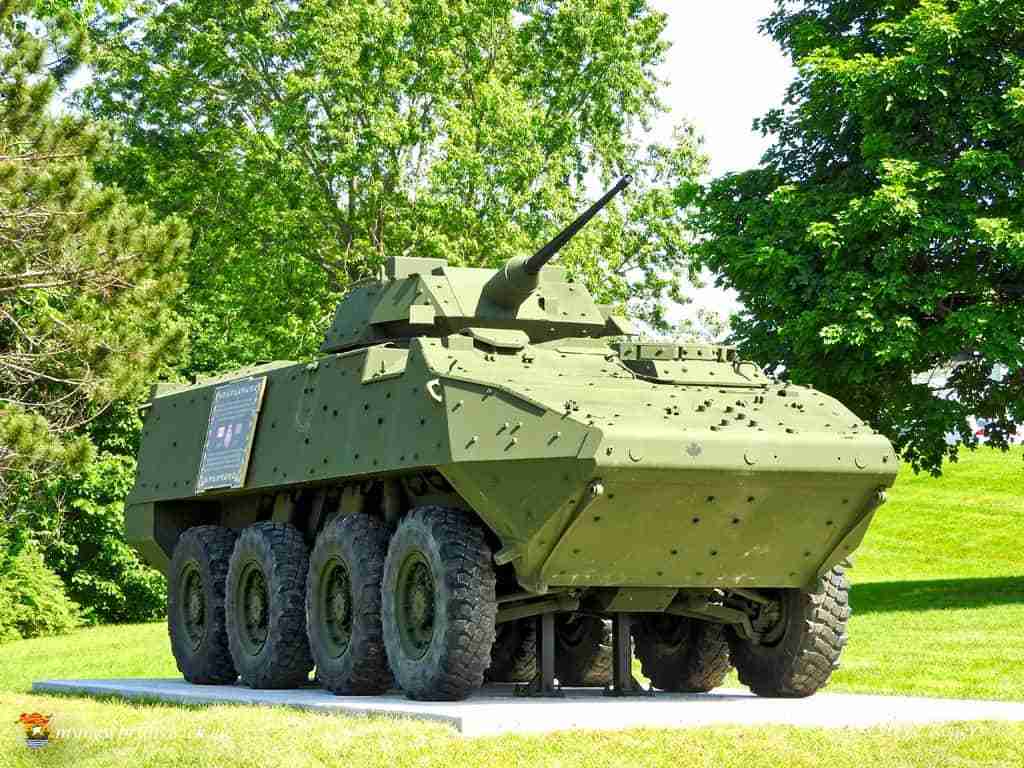 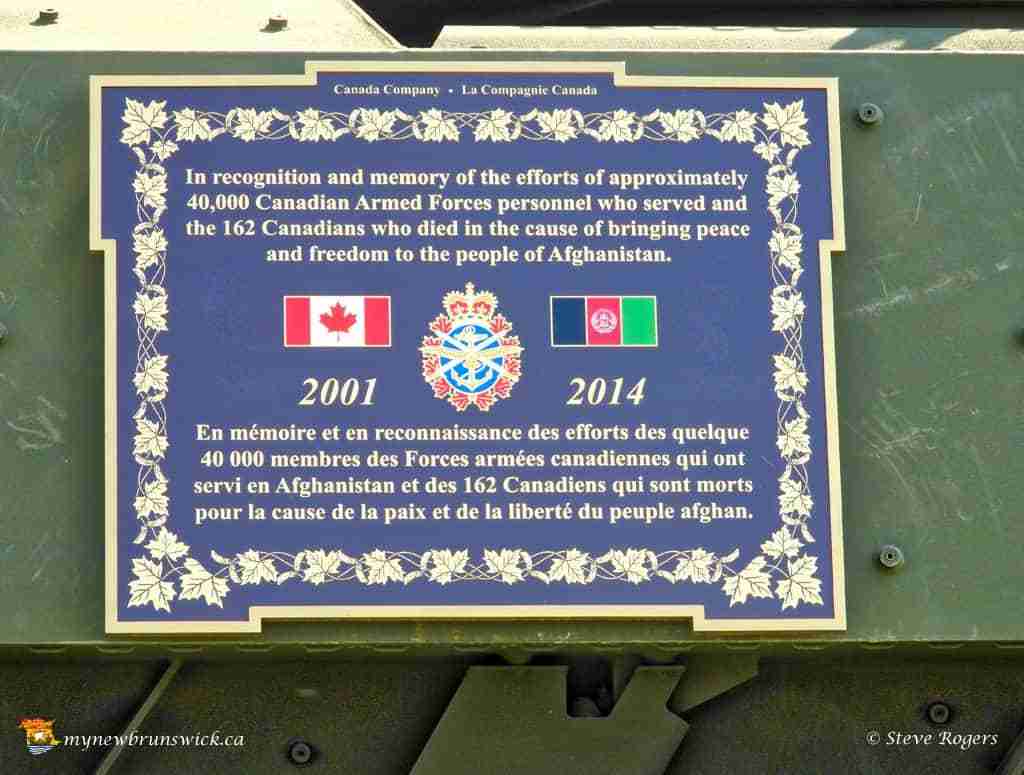 The Marysville Cenotaph, 190 Canada Street, is located in Veterans Memorial Park on the corner of Canada and Bridge streets. Overlooking the Nashwaak River, the site features two granite monuments and a six-pounder anti-tank gun on a landscaped lot.

The Marysville Cenotaph is designated a Local Historic Place for its commemoration of those from the district who were lost in the World Wars. The First World War monument, an obelisk carved of light-coloured granite, was erected in 1925. The less ornate Second World War monument of dark granite was erected in 1967. Both monuments are surrounded by a small park featuring landscaped grounds and a variety of mature trees. 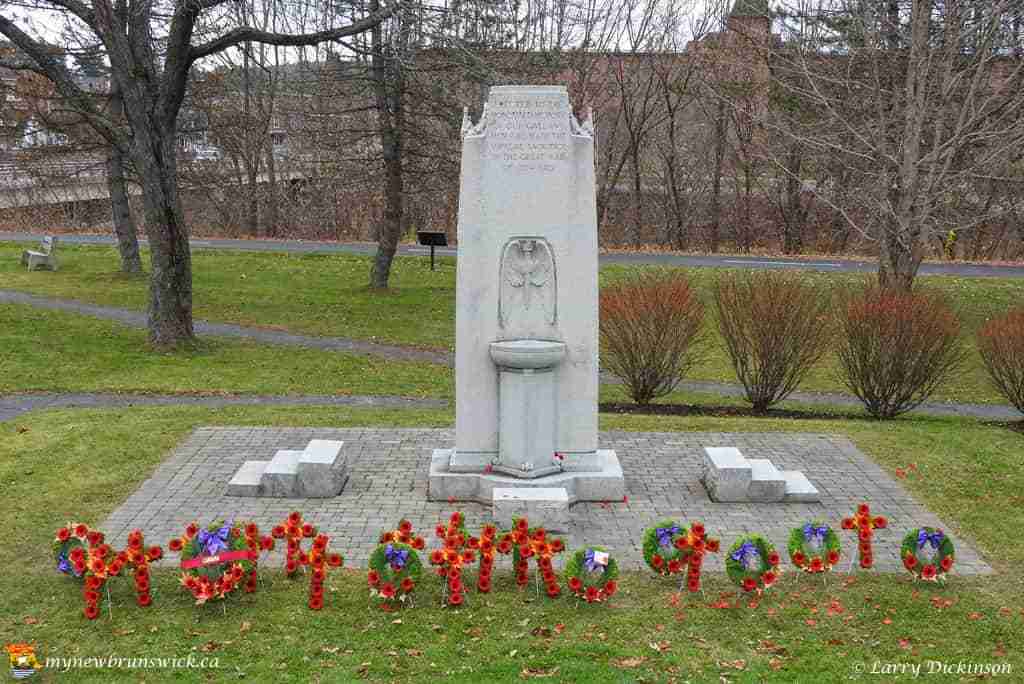 Set within Veterans Memorial Park, a small recreational site situated along the former railway line, the cenotaph is set apart from the surrounding commercial area, allowing visitors a quiet space in which to reflect. This land was donated in 1924 to the former town of Marysville by Canadian Cottons, corporate owners of the cotton mill that was the main industry of the town. The town has since become part of the City of Fredericton. 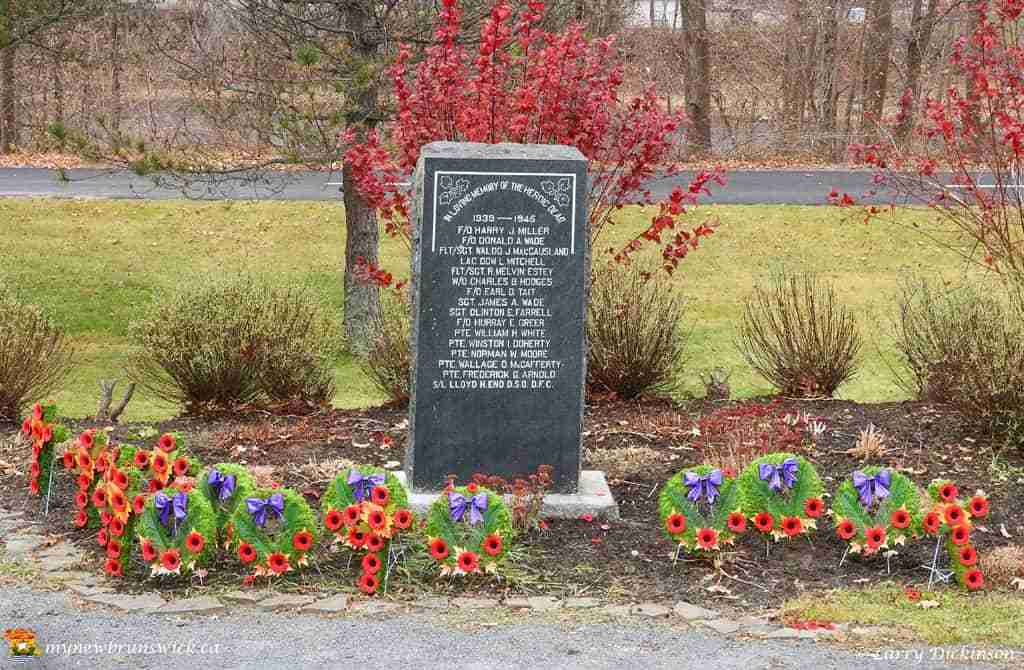 Also located on the site is a six-pounder anti-tank gun, which features the artillery red-over-blue tactical sign with a white number two superimposed. The cenotaph is used as a memorial site and for annual Remembrance Day ceremonies.

The cenotaph in New Maryland, is dedicated to those men and women of the New Maryland area who served, fought and died for their country. 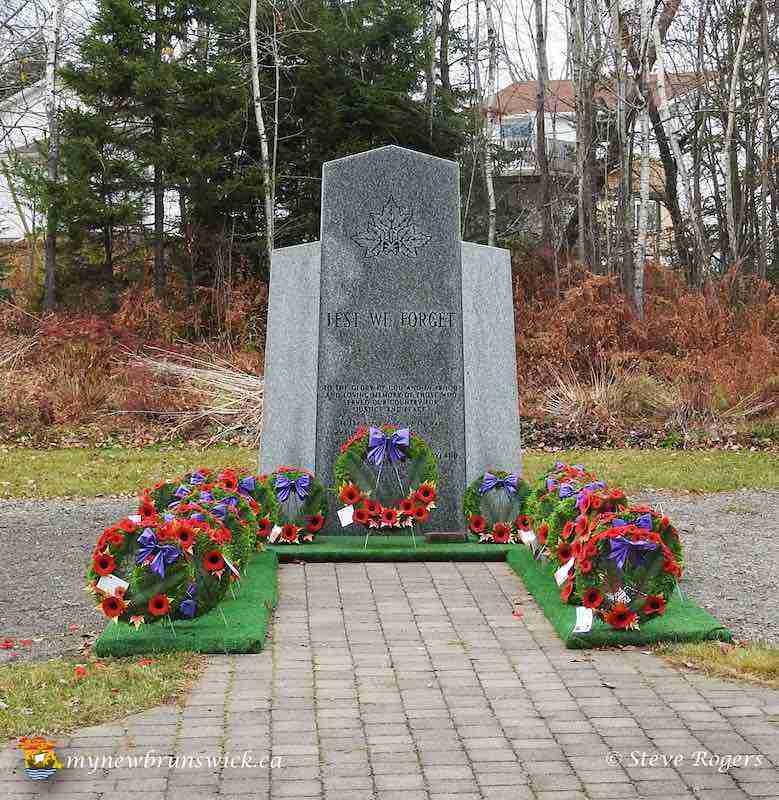 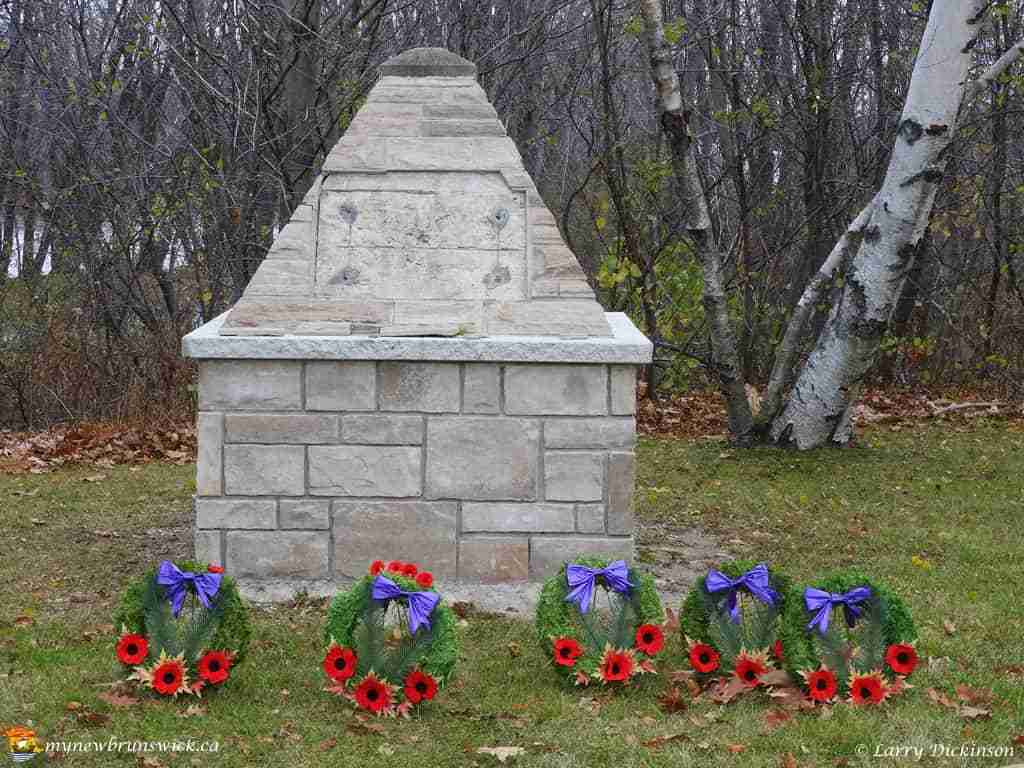