Built circa 1840, the Richard Steeves House is a two-and-a-half storey late Georgian residence. It is located on Main Street in Hillsborough.

The Richard Steeves House is historically significant for its association with its past occupants and for representing an elevation in living standards at the time of its construction.

This house was built using the same basic design and during the same period as the William Henry Steeves House (40 Mill Street). They were built by a father and son in the 1840’s. Although this house was built by Richard Steeves, the first occupant was his brother, William Henry Steeves, who was the founder and president of the Steeves Brothers Co., a company that dominated the local business scene. William Henry and his wife Mary moved to this house shortly after they were married. All six of their children were born here.

In his role as a Father of Confederation, William Henry Steeves attended the Quebec Confederation Conference in 1864. One daughter, Lucinda Jane, etched her initials three times into one of the 12-paned front parlour windows. The handiwork of her flowing hand is still clearly visible. As the saga of William Henry’s family unfolded over the next fifty years, Lucinda’s daughter, Edith, married the 17th Duke of Somerset, introducing a touch of British aristocracy to the Steeves family name.

The Steeves Brothers Co. moved its operations to Saint John, NB in 1862 at which time the house became occupied by its builder, Richard Steeves. He was Hillsborough’s postmaster from 1855 until 1901. His son, Archibald, acquired the property in 1883. Following his ownership, the building was acquired by the Wallace Family, in whose hands it has remained for more than one hundred years. 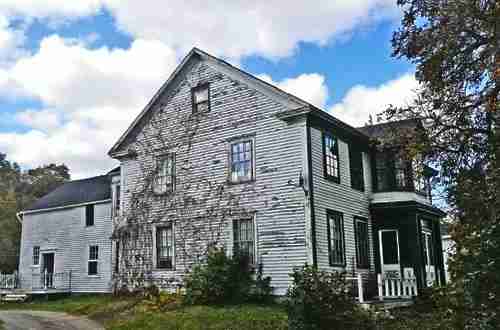 The building’s grander scale of architecture and the imported elements incorporated into its interior reflect an elevation in living standards during this period in Hillsborough. In some cases, the growing economy of Hillsborough during the 1840’s allowed the same family to move from a one room cabin to a ten room mansion virtually overnight. During this decade, ship building, lumbering, mining, aquaculture and the business of importing and exporting all reached maturity. The size and the luxurious appointments of the village’s houses from this period point to the nouveau riche social class that had arisen. The exterior of this residence exhibits the added refinement of an elaborately decorated square bay window above the porch entrance. The interior features a one hundred and eighty degree staircase, three-metre-high ceilings on the first two levels, an engraved marble fire place imported from Italy, tinned ceilings on both levels and built-in china cabinets with bevelled glass.