At one time the City of Saint John controlled six markets; a fish market and wharf on Water Street, a cluster of sheds on Market Street called the Country Market, Sydney Market that served Lowe Cove, a Hay Market on King Street and a cattle market in King Square. As Saint John grew not only in size but also in power the public came to realize that there was no need for six markets and they were centralized.

The first market building in Saint John was built in 1830 at Market Square at the head of Market Slip. The building was made out of wood and ended up burning down in 1837. Thus the city decided to recreate the building in 1839 making it out of brick but yet again it was destroyed in 1841.

During the time that the market was in use, it served many different purposes: the lower half of the basement was used as a general store. The main floor which you could enter from King Street was used for the actual market and the upper floor was where they held court and where council had their chambers. After quite some time went by, the city in 1874 decided to set up a Market Committee to go through proposals for a new market building, and so near the end of 1874 the market committee decided to go ahead and plan for a new market.

The market’s distinctive design was selected in a competition among local architects, and constructed by the city’s skilled tradesmen of the day. On December 16, 1874 the Market Committee offered two prizes to architects for a Market design competition. The first place prize of $200 was awarded to Messrs. McKean and Fairweather. A second place prize of $100 went to D.E. Dunham. Mr. W.P. Clark and Mr. W.M. Smith received a premium of $50 for the submission of their plan, and the Saint John City Market on Charlotte Street officially opened in 1876.

In the nineteenth century Saint John was one of the world’s leading shipbuilding centers, so it is no surprise that the roof of the City Market resembles the inverted keel of a ship. Hand-hewn timbers and dove-tailed joints that have stood fast for more than century attest to the skill and experience of the builders. Fortunately, the Great Fire of 1877 left the market building undamaged.Some of the businesses in the market have been operating continuously there for more than 100 years. Today the market is more vital and productive than in anytime in its history.

First opened in 1876, the City Market has withstood the test of time – from The Great Fire of 1877 which devoured the city around it only a year after it opened, to the twentieth-century urban renewal that built a brand new city right outside the iron gates. 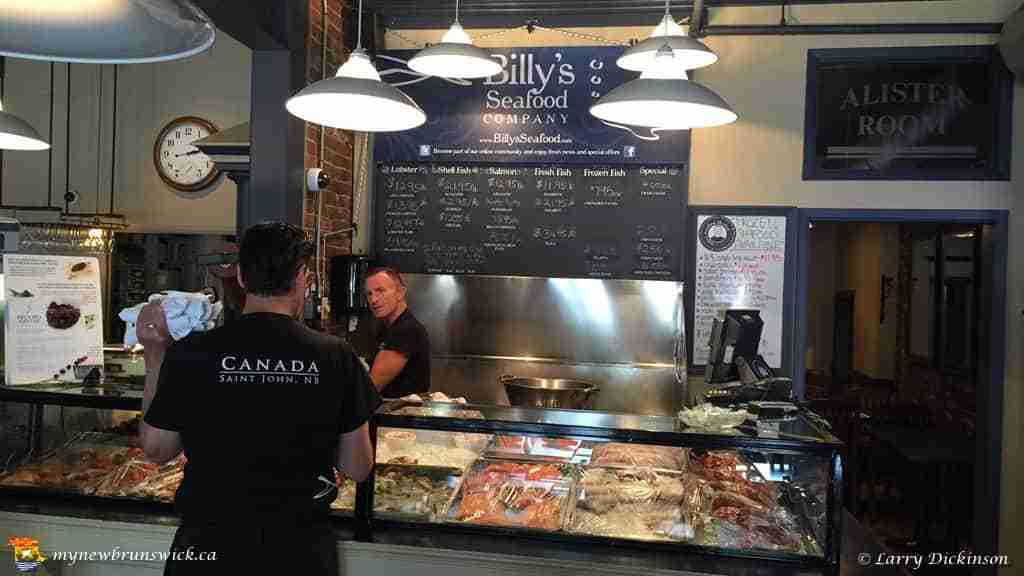 A full city block in length, the Market runs downhill from the “head of the Market” on Charlotte Street, gently sloping to the Germain Street entrance, a full 10 feet below. At both entrances hang the same gates that have swung closed at the end of each business day since 1880. Crafted from heavy wrought iron, their graceful design is a tribute to the skill and artistry of the local blacksmith who created them.

The Royal Charter establishing the City of Saint John in 1785 provided for the operation of public markets, naming the Mayor of the city as Clerk of the Market with power to grant licenses to farmers, craftsmen and others to peddle their wares. Each license bore the Mayor’s seal and commanded a fee which comprised a portion of the Mayor’s compensation at that time.

And over all, the Crest of the City of Saint John holds a prominent position above the Germain Street entrance. The official seal of the city, its symbols tell the story of a proud history in fishing, forestry, shipping and industry – the strengths of our forefathers and still our strengths today.

In its inception, the City Market was presided over by the “Pie Powder Court.” The Pie Powder Court was, in common terms, responsible for all commercial dealing in the Market. It was presided over by the Market Clerk who had the authority to levy fines or expel merchants and settle rules of behaviour within the market area. The market reports show a list of fines levied on short weights, bad produce and breaking the rules of market procedure.

The term Pie Powder came from the Norman French “Piepoudre,” a term which refers to common peddlers and chapmen who traveled from market to market. They had “dusty feet” (pieds poudre) because of their wandering. The “Pie Powder Court” has now been taken over by provincial governmental agencies. The Market Clerk and staff still preside over the daily operation of the market and report through the Market Committee to the Saint John City Council.

The ringing of the Market Bell every morning and evening, a tradition at the City Market, signals opening and closing of the day’s business. Today the keeper of that tradition is the Deputy Market Clerk who oversees day to day affairs.

Many renovations and improvements have taken place over the past few years, including a new concrete floor, glassed in eating and storage areas on either side along North and South Market Streets, an indoor underground connection to Brunswick Square, a better heating system, and restoration of the stalls. This restoration work was made possible by funding from the City of Saint John, Parks Canada, and the Government of New Brunswick.. Today the City Market reflects the generally relaxed life style of its local citizens and is a National Historic Site.