The first Acadians of the greater Memramcook region, circa 1700, were ministered to by the missionaries attached to the Beaubassin parish. The first church or chapel ever built in Memramcook was erected in 1753 at a place called Pointe-a-Bouleau, the present-day Breau’s Creek. This church did not last very long as it was burnt down by the English army two years later during the unfortunate events of 1755.

Some ten years after the expulsion, around 1765, some Acadians returned to their former lands and a few settled in the Memramcook area. These few settlers were periodically visited by itinerant missionaries attached to the Diocese of Quebec, including a certain Joseph-Mathurin Bourg who was appointed “missionary of Acadia” in 1772. Around 1781, Father Thomas Leroux was appointed pastor of the Memramcook parish recently erected canonically and dedicated to Saint-Thomas. At that time, Saint-Thomas parish covered the entire region from Richibuctou to Minoudie in Nova Scotia. The parish church, the first of the modern era in Memramcook, was of a thatch-roof design and was located at La Montain where a memorial cross can be seen today on its former location. Father Leroux died in Memramcook in 1794. At that time, a new parish had been established in Richibouctou-Village and the extent of Saint-Thomas parish had been reduced somewhat.

Father Leroux was replaced as pastor by an Irish priest named Thomas Power. Two years later, the church at La Montain burned down when sparks from a nearby brush fire set fire to its thatch roof. Faced with disagreements and misunderstandings, Father Power decides to rebuild at a place called Village-des-Piau (today’s Saint-Joseph). This new church was of a somewhat mediocre and poor construction.

In 1804, Father Power is replaced by Francois Ciquard, a French Sulpician priest who remains pastor until 1812. Meanwhile, other parishes have been erected along the east coast of New Brunswick so that Saint-Thomas parish now extends from Scoudouc to Minoudie, including the present greater Moncton region.

In 1816 Ciquard’s successor. Father Louis Brodeur, supervises the construction of a new church which is described as “the most beautiful temple ever erected in the region”. By using the detailed contract written up for its construction, it has been possible to reproduce a sketch of the church (MAUM collection).

In the intervening years, several priests will look after Saint-Thomas parish, including Father Joseph Couture from 1833 to early 1836. Father Ferdinand Gauvreau remains pastor of Saint-Thomas for sixteen years. Although the parish has not decreased in size, other churches and chapels have been built within its confines, including Saint-Anselme and Scoudouc. In 1840, Father Gauvreau begins the construction of a stone church whose main body is the one that still exists today. Faced with various problems, Father Gauvreau is unable to finish its construction and in 1847 only the outside walls have been erected. 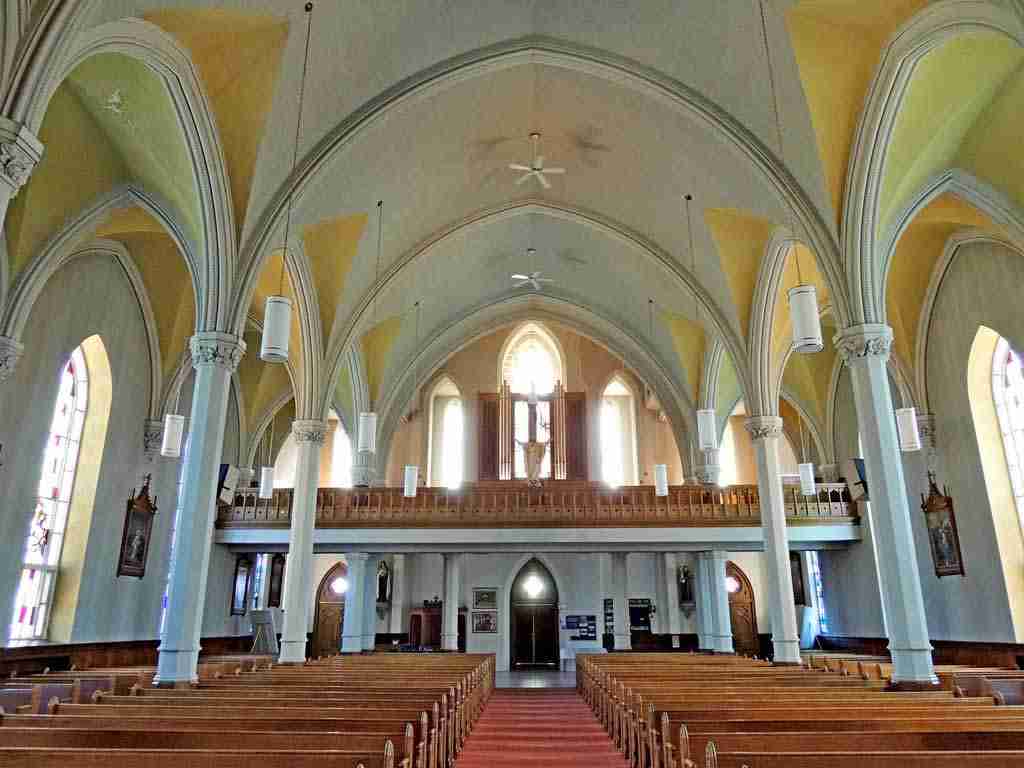 Meanwhile, in 1842, as work proceeded on the new church, a chapel was built at Beaumont on the lands of the Mi’Kmaq reserve. This marked the first time that two churches or chapels exist simultaneously in the greater Memramcook region. The native people dedicate this chapel to Saint-Anne.

Father Ferdinand Gauvreau leaves Memramcook in 1852 and is replaced by Father Francois-Xavier Lafrance. Shortly after his arrival in Memramcook, Father Lafrance identifies two major projects: the foundation of a college, or academy, for the education of young Acadians, and the resumption of construction works on the new church. Lafrance’s college, called “seminaire Saint-Thomas”, opened in 1854 while the church, finished in late 1855, was officially inaugurated on August 15, 1856. A vestry was added to the church in 1857.

In 1864, Father Lafrance was replaced by Father Camille Lefebvre, c.s c., who came to Memramcook with the task of re-opening Lafrance’s college which had to cease operations, two years prior, due to financial difficulties. Under the direction of Father Lefebvre and other members of the Holy Cross congregation, the college reopened in the fall of 1864 under the new designation of St Joseph’s college. In coming to Memramcook, Father Lefebvre took on the pastorate of Saint-Thomas parish, two functions that he exercised simultaneously for over thirty years.

The stone church’s external structure was not be modified until 1879 when Father Lefebvre had the original spire replaced by the steeple that has remained to this date. Two years later, during the first national Acadian congress of 1881, the blessing of two new bells (1192 and 520 lbs) took place, thus giving the Saint Thomas Church a peal of three bells, the original one, weighing 800 pounds, having been installed in 1865. On January 28, 1895, Saint-Tomas parish was saddened by the death of Father Lefebvre. His thirty years as pastor of Saint-Thomas parish will never be surpassed. During this time, the peripheral regions of the large Memramcook parish had seen new parishes evolve so that, at the time of Lefebvre’s death, Saint-Thomas parish was confined to the region commonly referred to as “the Valley”.

Father Lefebvre’s successor, Father Albert Roy, c s.c., continued to exercise the dual functions of pastor of the parish and superior of the college until, 1904. After that date, the pastor of Saint-Thomas never again had that double responsibility.

Three years after his appointment as pastor. Father Roy decided that a church must be built at “Village-du-Bois” (present-day Memramcook-east). Ths is necessitated by a lack of space in the stone church. This new church was dedicated to “Notre-Dame-de-Lourdes”, the name which will be given to this new parish when erected canonically later on in 1900. 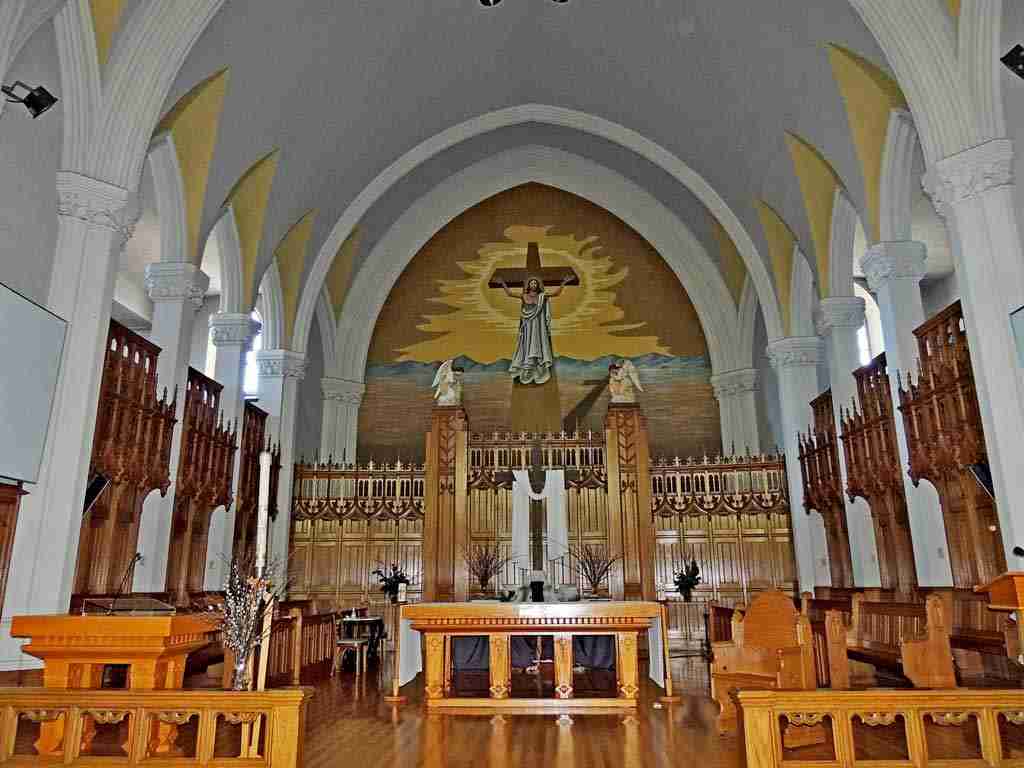 Despite the construction of this new church the lack of space remained a problem at Saint-Thomas church. As a result, in 1934, construction work took place to enlarge the church. The nave is almost doubled in area, and the following sections appear: a new sanctuary. an organ loft, a new vestry, Saint-Anne chapel and a parish hall under the vestry. The lateral lofts were eliminated allowing the double row side windows to be replaced by larger and wider single windows.

As renovations were taking place at the Saint-Thomas church, the pastor was also supervising construction on a new church at Pré-d’en’Haut. This new church opned in 1935 and was  dedicated to “Notre-Dame-de-l’Annonciation”, the name of this new parish when erected canonically in 1940.