Seaman’s Mission is recognized for its use as a Mission for sailors who were away from home. The building and the Seaman’s Institute are associated with Lady Alice Tilley, the wife of Sir Leonard Tilley, Father of Confederation, Premier of New Brunswick, and Lieutenant-governor of New Brunswick.

One of her contributions to Saint John was the establishment of a non-alcoholic Seaman’s Mission as an alternative to sailors to provide them with an alternative to the bars in the City. The mission offered seamen from the ships that arrived in the Port of Saint John from all over the world, some recreational facilities. 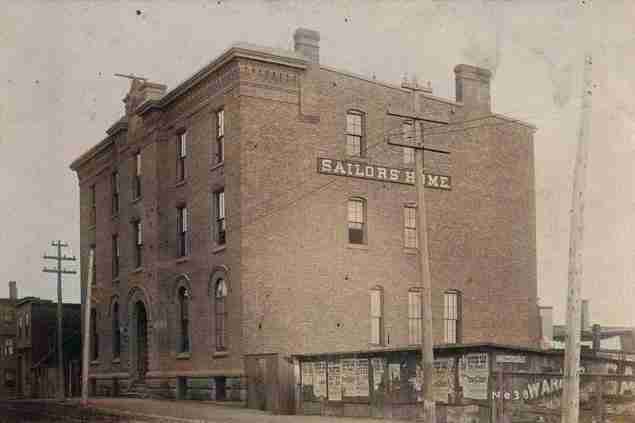 It was also a place where they could write letters to their loves ones and have suitable places to sleep. This building served seamen through the Great Depression and through two World Wars. The Seaman’s Mission was founded in 1877.

Seaman’s Mission was built in 1908 by B. Mooney & Sons and the architect was G. Ernest Fairweather. It is a three-storey brick Italianate building. In 1932, major interior renovations were made and this building became one of the most up-to-date institutions of its kind on the Atlantic Coast. The building was laid out so that it greatly resembled the deck and deckhouses of a vessel. A gallery was built that encircled the entire room. The large auditorium had seating capacity of 700, plus seating in the balcony. The building had two entrances, one for officers and the second for crewmen. Metal rings that were suspended by ropes hung from the ceiling for exercise as well as a boxing stage that could be set up or removed quickly. It had a first class canteen and kitchen. Iron ship ladders accessed the 2nd storey balcony where there was a life sized statue of Lord Nelson. In 1965, the Seaman’s Institute left this building and moved to the YMCA building on Hazen Avenue. Seaman’s Mission was abandoned for 11 years, and the city of Saint John obtained ownership in 1976.

Seaman’s Mission is also recognized for being one of ten buildings that were owned by the City of Saint John that were in serious consideration of demolition. A call for proposals in the early 1980’s allowed purchasers to obtain these 10 Prince William Street properties at a nominal amount provided they restore them to their original conditions. The restoration was a success and within a few years some of these buildings, such as the building in question, became a part of Canada’s first National Historic Streetscape.