Many blockhouses were built in North America, but few have survived. Why is the St. Andrews Blockhouse still here?

When the War of 1812 broke out, the citizens of St. Andrews had little to fear from their neighbours in Maine across the St. Croix River. Not everyone in New England was in favour of the war, trade with Atlantic Canada was brisk and the main threat to security was from privateering, not invasion. Despite the conflict, resolutions were passed on both sides of the border declaring a local truce. Although in 1814 the British in Halifax invaded northern Maine, which they occupied until 1818.

Three gun batteries were quickly erected and three blockhouses – including this one – were aded soon after to defend them. From inside, soldiers armed with muskets and a small cannon could defend the batteries and help protect shipping along the river and harbour. The 18-pounder guns – so called because the shot they fired weighed 18 pounds – could fire as far as Navy Island. The defences worked. Although privateers captured many ships at sea, they never attacked St. Andrews.

In the early 1800’s, St. Andrews was a prosperous garrison town with a busy commercial seaport. Licensed American privateers would undoubtedly be drawn to the ships for their valuable cargos, to loot homes and businesses. During the American Revolution, privateers attacked and robbed every port in the Maritimes except for Halifax.

In the 1860’s during a brief period of tension with the United States, it again became an important component of civic defence, but its military role declined soon after.

Throughout the 19th century the St. Andrews Blockhouse was used for storage and occasionally as a barracks as the militia. It contained elements of the oldest blockhouse in New Brunswick. 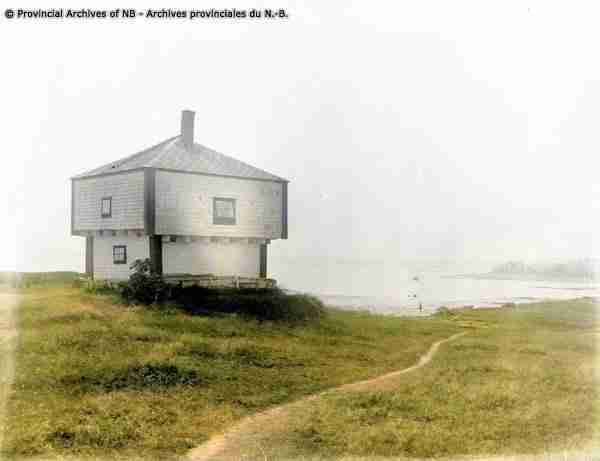 Situated on the Niger Reef on Passamaquoddy Bay, it provided an excellent vantage point for soldiers keeping a watchful eye. This was one of 12 such structures used to defend New Brunswick during the war between Britain and the United States.

By the late 1800’s, St. Andrews became a popular summer resort. This blockhouse, once known as the West Point Blockhouse, was converted into a residence, and a public tea room opened nearby. The other two blockhouses (east blockhouse and Joe’s Point Blockhouse) were demolished.

Over the years this building has become a prominent symbol of St. Andrews. St. Andrews Blockhouse has been a National Historic Site since 1962.

In August 1993, the St. Andrews Blockhouse was seriously damaged by fire. The people of St. Andrews and Parks Canada worked together to restore the blockhouse and ensure its place in the future of the town and the country.

One thought on “St. Andrews Blockhouse”