St. Anthony’s Catholic Church was named  St. Anthony’s Parish in Fredericton. Originally it was named Saint Mary’s Parish and was established in 1887, which was separated from St. Dunstan’s Parish. The land and lumber were donated.

Catholicism first came to this vicinity when the French constructed Fort Nashwaak. In the fort as part of the Governor Villebon’s lodgings was a room fitted for a chapel. The first priest was Fr. Elizeé. He was a very retiring fellow who did not become involved in the politics of the times. He was content to fulfill his priestly duties and administer to the spiritual news of the garrison and perhaps those of the local Maliseets. He was loyal to the Governer; however, he did not encourage the Maliseets to go to war against the English. Another priest, Fr. Simon, a missionary from Quebec, who visited the fort regularly, was more nationalistic and saw as his duty to encourage the attacks to massacre the English to the south. After the French military departed from the area, the French and Maliseets continued to have irregular visits from the French clergy from New France (Quebec). 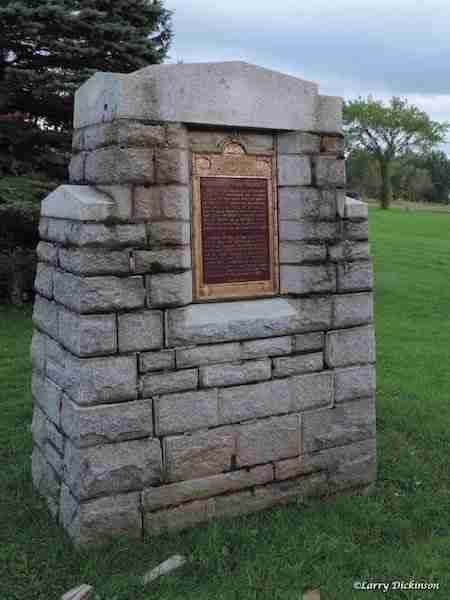 In 1783, Nova Scotia, which then included New Brunswick, removed two restrictions that had been placed on Catholics in the homeland. After that date they were allowed to own land and Catholic clergy were allowed into the province.  In the years after the Napoleonic Wars, that is 1815 onward, many British Catholics came to live in New Brunswick.

The first British clergy contact came when New Brunswick was established as a diocese in 1842 and Bishop Dollard chose Fredericton as his place of residence. The Catholics of Devon made their way to St. Dunstan’s Church in Fredericton to attend Mass, and receive the Sacraments. Not until 1887, at the urging of Fr. McDevitt and his sister Mrs. Sarah Hayes did the people of Gibson and St. Mary’s Ferry and outlying areas see fit to employ a priest and to build a church and rectory. At the time of the 1881 Census in St. Mary’s Parish the congregation consisted of mostly Irish Catholics (264) and the people of the Native community (82). Most of the Catholics were farmers or labourers.

When St. Mary’s Roman Catholic Parish was erected in 1887, the first priest, Fr. John P. Kiernan was responsible for all of the Catholics in the northern part of York County beginning at the St. John River and north to Stanley. He also looked after the spiritual needs of the Maugerville mission. While he was here Fr. Kiernan had the church and rectory built. He purchased land for a cemetery from Henry Gill in 1890. He traveled to the mission churches and administered to the spiritual needs of his people. He was very kind to the Maliseets and assisted them in their dealings with the community.

The next priest to be appointed to the parish was Fr. John J. Ryan. Like Fr. Kiernan he was also born in Ireland. He was not long in the parish when he encouraged the congregation to construct a new and much larger church to accommodate the growing parish. In 1906 the new church was completed and was named St. Anthony’s. The large wooden, gothic revival building was the pride of the community. It was referred to as an “ornament to the town.” The building was designed by J.C. Dumaresque & Sons of Saint John. They also built the NB legislature. The church was lighted with gas light fixtures. Although it has lost some of its original grandeur, this building is still standing today at 603 Union Street. Extensive renovations that have taken place over the years have reduced its visual effect.

Some of the original features that still remain are the beautiful stained glass windows, the plaster relief Stations of the Cross, and the Last Supper altar piece.

Fr. Ryan traveled by horse and wagon to the mission churches at Kingsley, Tay Creek, Stanley, and Maugerville. He was very well respected by the laity and by the people in the community. As well, he and his mother, who lived with him, were kind and generous to the people of the parish. During his time at St. Anthony’s an Irish benevolent group was established. They were called the Ancient Order of Hibernians (A.O.H.). Hibernia was a name applied to Ireland in the past. The organization was begun in New York in 1836. Fr. Ryan was a frequent visitor to New York and he probably encouraged the establishment of the society at St. Anthony’s.

The third pastor at St. Anthony’s suggested the name for the town. When a meeting was held on June 21, 1917, at St. Anthony’s Hall several names were put forward, such as, Eastbank, Brooklyn, Haig and Riverton. Many people favoured retaining Gibson as the names of the whole town. Fr. Murphy suggested Devon because it was the first town incorporated after the appointment of the Duke of Devonshire as Governor General of Canada. The name was accepted and Devon became the only town in New Brunswick with this name.

The Catholic Women’s League was begun at St. Anthony’s in the 1930’s. This was a branch of the national group of the same name. Their motto is “For God and Canada.” Since the beginning of the church at St. Mary’s Ferry the women did invaluable work in fund raising through various church events, such as, picnics, suppers, raffles, etc. They also worked in the church by cleaning and maintaining the altar. The C.W.L. took over many of these duties and organized and divided the work among them. There seems to have always been a leader to take the reins and move the group forward. Some of the early presidents of the C.W.L. were: Maria Shortill, Francis Stephen, Loretto Hayes, Mrs. A.J. McEvoy, Mrs. Hugh Galen, Mrs. Frank Barry, Miss Mary Cassidy and Mrs. Peter Dinsmore.

The youth at St. Anthony’s organized a group under the Catholic Youth Organization (C.Y.O.) in 1938, with a four point program emphasizing the spiritual, cultural, social and physical development of those who joined. The young curates who assisted the priest were often given the duty of directing this group. Besides sports, such as, badminton, baseball, skating and bowling, the youth took on the annual St. Patrick’s Plays. These plays were a much anticipated event for the parish and played to packed audiences.

The C.Y.O. also helped in the war effort by having social evenings with members of the armed forces. A newsletter called “The Carry On” was published during the war years to keep people informed about social issues and the events of the parish.

The longest serving priest was Rev. Walter Donahoe. He was a curate at St. Anthony’s from 1911-1913 and then later parish priest from 1928-1952. This long serving priest was well-liked by his people. His kind nature may have been one reason why several curates were sent to assist him so they could learn from his good example. One of his main accomplishments was to encourage the Federal Government to purchase a parcel of land away from the river for the relocation of the Mailseet Reservation. This new location with newly built houses was at a more hygienic spot. The old houses were eventually abandoned in favor of the new ones with only the school remaining on the old Reserve by the river.

The Catholic Church in Devon has roots dating back to the French at Fort Nashwaak. The Irish settlers brought their own customs and celebrations when they established their church. The Irish were the greatest influence on the culture of the parish because of their numbers. Through the years the church has had several devoted and energetic, Irish priests who have shown great leadership for their people. The laity of the church has also demonstrated their love for the religion through their steadfastness, hard work, and dedication to maintaining their church through easy and difficult times. Where a few working alone may have failed, this group working cooperatively managed to accomplish great things.

With changing demographics, in 2016 Bishop Robert Harris began a process of realignment and revitalization within the Diocese of Saint John. In 2018, it was announced that St. Anthony’s, St. Theresa’s and St. Patrick’s (Stanley) would be realigned into one new parish, Our Lady of Peace Parish.

Resource: Our Lady of Peace Parish

Sunset After The Storm