Some history of St. Dunstan’s Catholic Church. As early as 1611, Recollect and Jesuit missionaries worked in the area of Fredericton, converting the native Indians, and ministering to French settlers.

In 1674 Quebec became an Episcopal See, and missionary priests were sent from that Diocese to minister to the converted Indians, Acadians and the recent Catholic settlers from the British Isles. By 1758 the French inhabitants had left the area, which is now Fredericton, and for about 70 years there was no Catholic church in Fredericton. Therefore, Catholic families travelled to French Village, about 11 miles away, for Sunday mass. 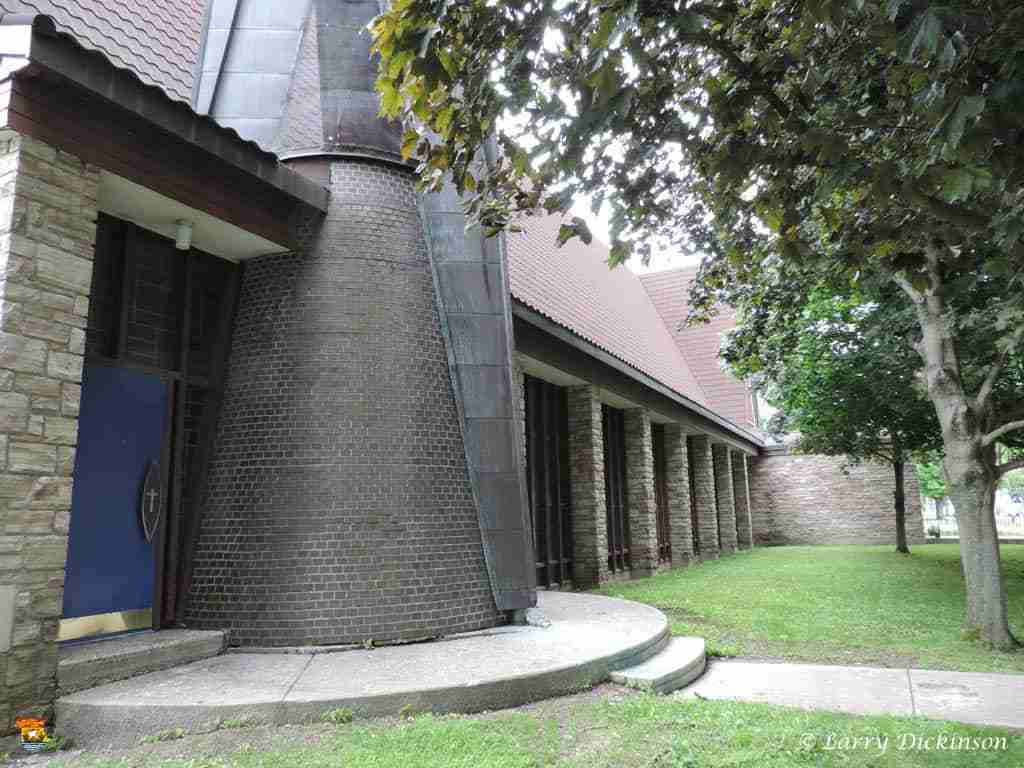 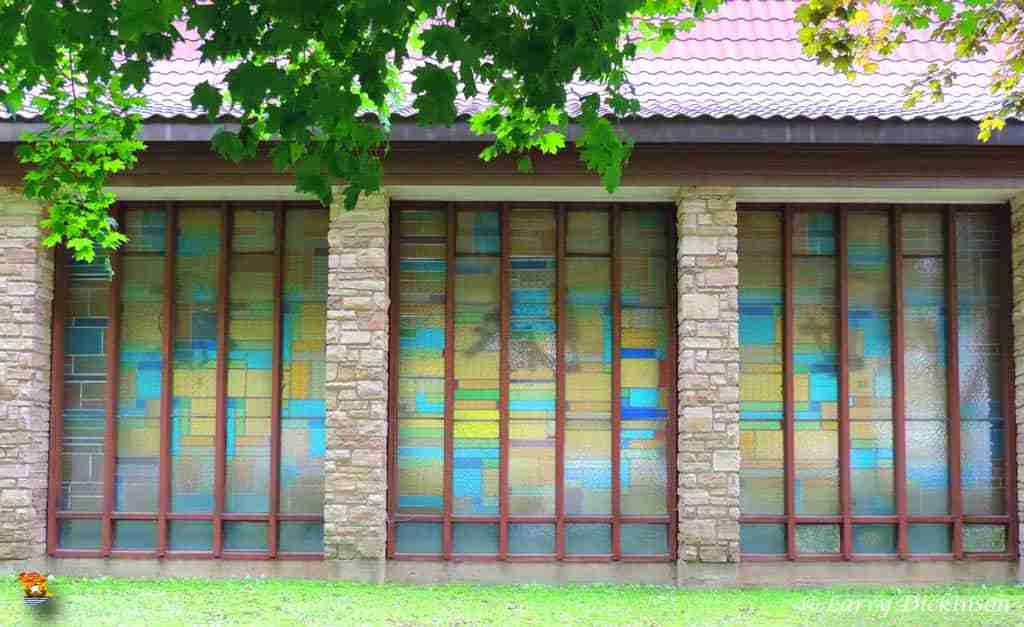 During this period, once a month, a French speaking priest came to Fredericton, to say mass for the English speaking inhabitants, most of whom were Irish. Mass was celebrated in a house, owned by the Donnelly family, and situated on the corner of Northumberland and King Streets. Because the parish was under the pastoral care of the Quebec Diocese, on one occasion prior to 1825, Bishop Plessis visited it. Later the parish came under the English speaking Diocese of Charlottetown, Prince Edward Island. As a compliment to the Cathedral Church there, the new parish of Fredericton selected St. Dunstan Catholic Church as its patron saint. 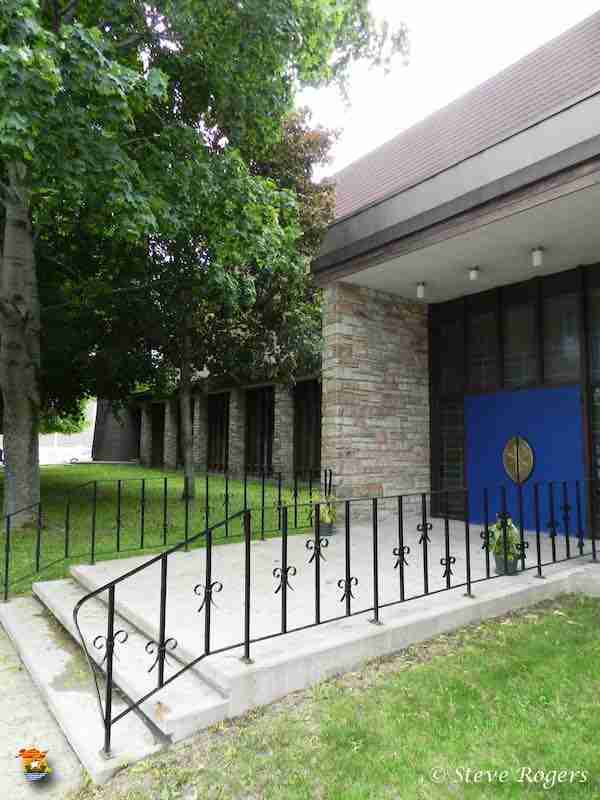 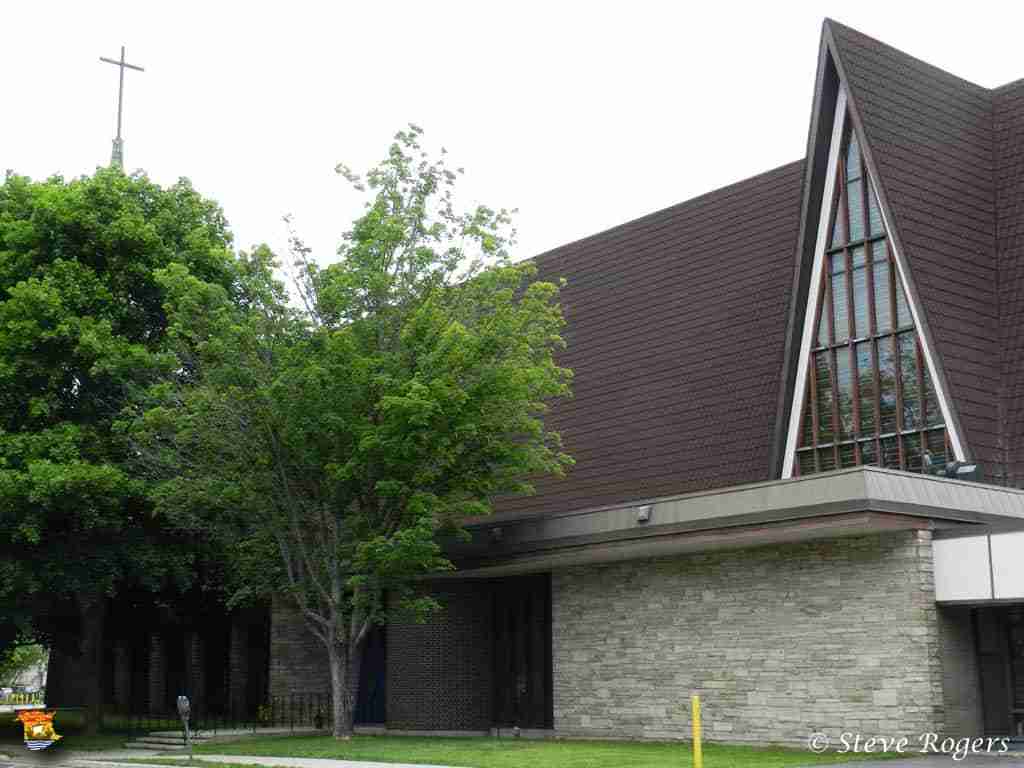 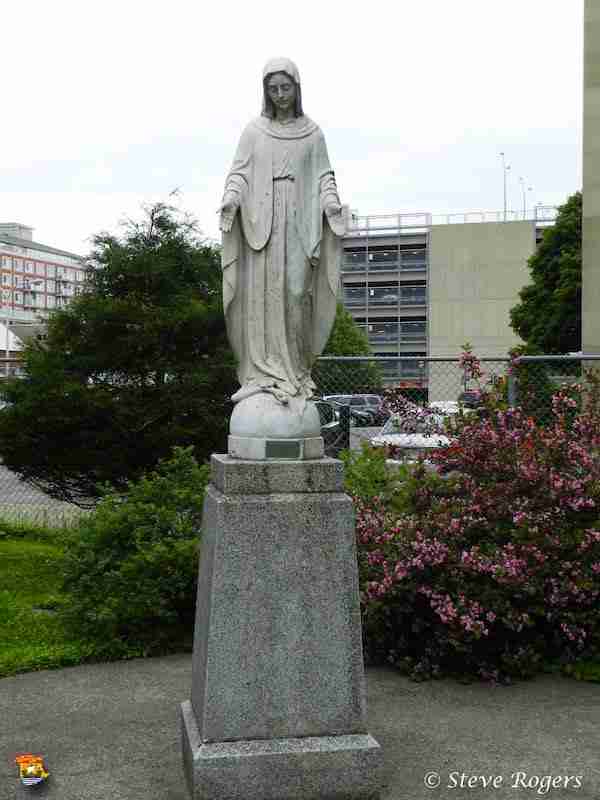 The earliest history of St. Dunstan’s Catholic church starts in 1827 with the arrival of Father Michael McSweeney as the first resident priest. Fr. McSweeney built a chapel on the property purchased in 1824. Later, after the erection of the first St. Dunstan’s church, this chapel was moved to the rear of the lot and served as a parochial school. Fr. McSweeney died, still a young man, in 1836. Fr. William Dollard became the second priest. He was an Irishman, having been born in Bath Krain, Ireland on the 29th of November 1789. He was ordained in Quebec in 1817, and after being stationed in Arichat and Labrador, came to the Miramichi in 1822, before moving to Fredericton. Under his direction, in 1842 the original St. Dunstan’s church was erected. The contractor was Michael McGlinchey, who also built the old St. Gertrude’s church in Woodstock, and was a prominent builder of the day. 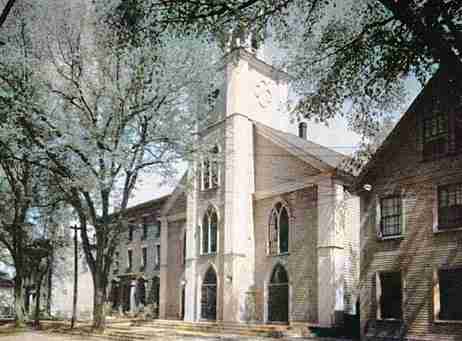 The original St. Dunstan’s Catholic church was a beautiful church. The canopied ceiling was blue with golden stars, representing the Canopy of Heaven. Among the stained glass windows was an arched window depicting the church’s patron saint, who had been the Arch-bishop of Canterbury. On June 11th, 1843, Father William Dollard was consecrated as the new bishop by Bishop Turgeon of Quebec. The new bishop was given an oil painting of the Crucifixion. This picture, which can still be seen in the present day church, hung over the main altar. 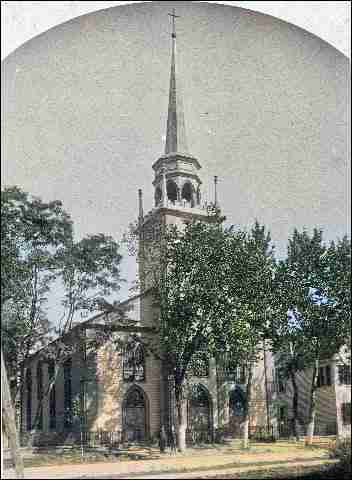 A set of silver candlesticks and a silver crucifix were gifts from France. Later they were stolen and remained missing for months. However, they were found by a small boy playing on the hillside by College Hill and returned to the then pastor, Fr. McDevitt. As there were no regular evening services, there were no lights in the church at this time. For Midnight Mass on Christmas Eve, members of the congregation brought their own candles, which were kept lit during the mass. 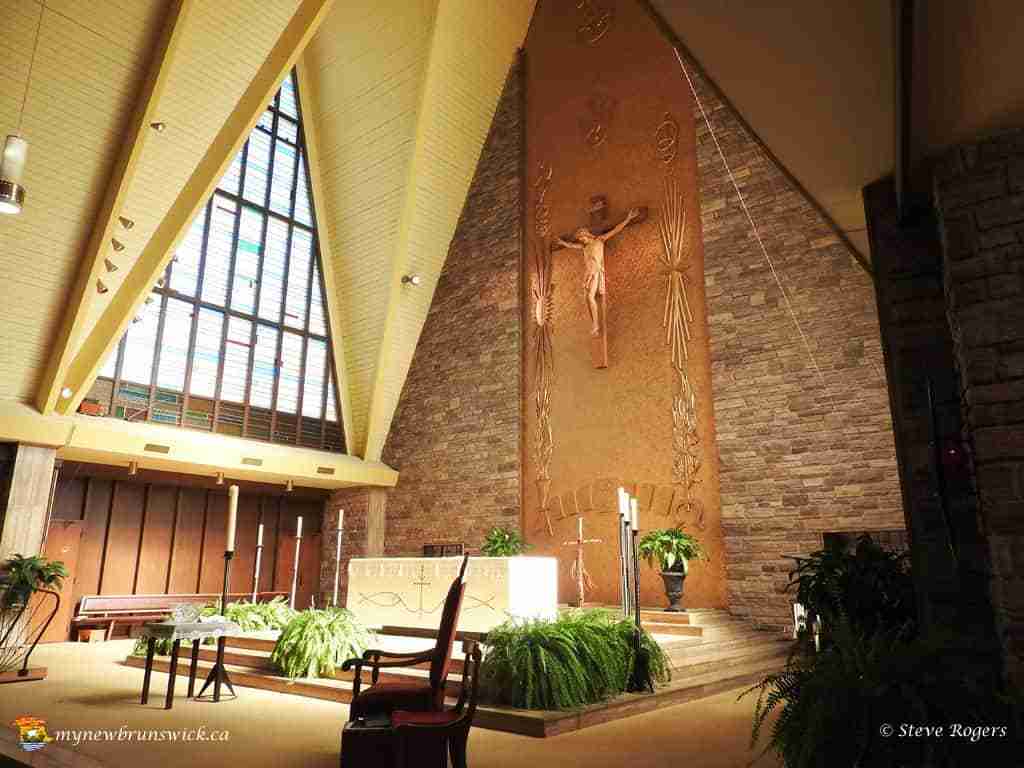 During Bishop Dollard’s stay, the congregation increased in numbers due to the arrival of Irish immigrant families, victims of the Irish Potato famine of 1848. After the completion of St. Dunstan’s church it was found to be in financial difficulties. The Catholics in Saint John sent a delegation to the Bishop, offering to pay off the debt, if the See were to be moved to Saint John. This occurred, but Bishop Dollard frequently visited Fredericton and on one visit died there on Friday evening, August 29th, 1851. His body was originally interred under the High Altar in a vault. In 1846, the firewards, as they were then called, were increased to ten in the Parish of Fredericton. On May 22, 1849 a fire broke out destroying twenty buildings on lower Queen Street. A more disastrous fire broke out on November 11th, 1850. A brisk north west wind was blowing and almost 18 acres of the city were destroyed. In the area between Carleton and St. John Streets, and from Queen to Brunswick Streets, only the Roman Catholic Cathedral Church and the bishop’s residence survived. It is said by older city residents that the parishioners of St. Dunstan’s Church covered the roof with themselves, in order that their church would be saved. Over 300 buildings had been destroyed by the fire. 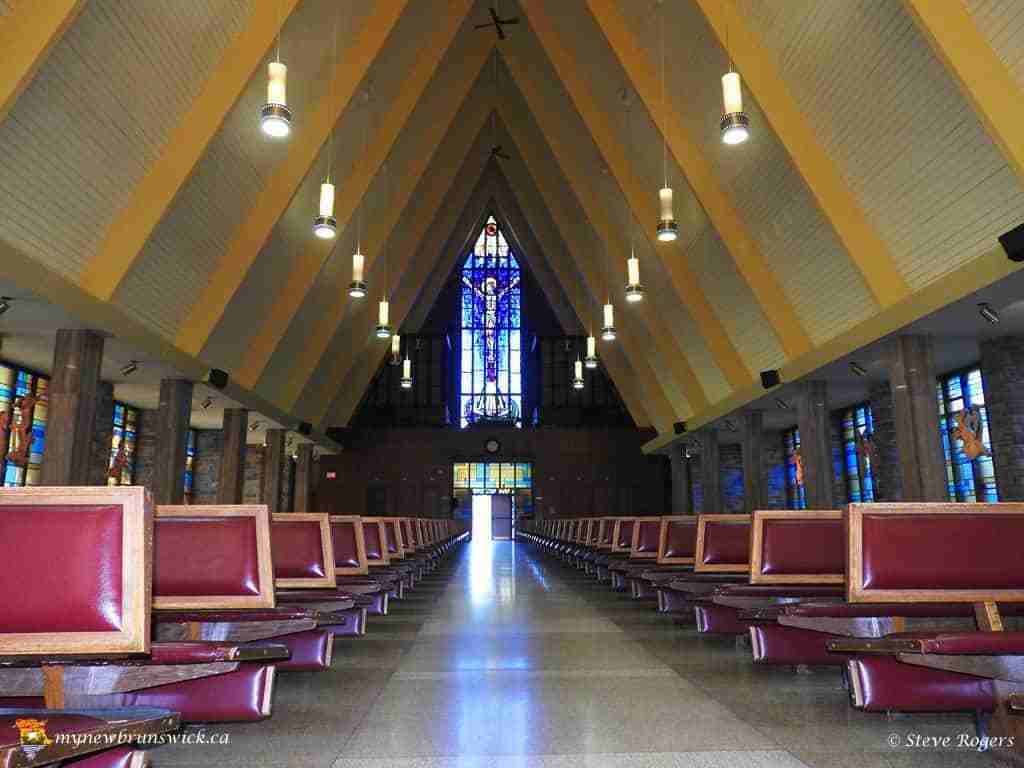 Fr. McDevitt, who served from 1851 until his death in 1897, expanded the property and buildings. He erected the priest’s house, the convent and St. Dunstan’s hall. He also purchased the building occupied by the Knights of Columbus, and the Hermitage, which finally fell into decay and was torn down. After his death his extensive library became a nucleus for the St. Dunstan’s Parish and Public Library. Rev. Timothy Casey succeeded Fr. McDevitt. He was responsible for installing a heating system and also new pews. Later he became Bishop of Saint John. He was transferred in 1912 to Vancouver as Archbishop. The next priest was Father Carney, who was to become Monsignor Carney.

The Right Rev. Dr. Charles Boyd became the parish priest for a period of 24 years, leading to the building of the modern St. Dunstan’s Church. This new church was consecrated on the 15th of August, 1965 and the old church demolished. The new church has a seating capacity for nearly 1000 people and a spire height of 92 feet, six inches from the ground to the foot of the 18 foot high superimposed cross. An altar of white marble has been placed in the sanctuary. There are two side altars and two shrines. The baptistery is at the front of the church and can be seen on the right hand side. 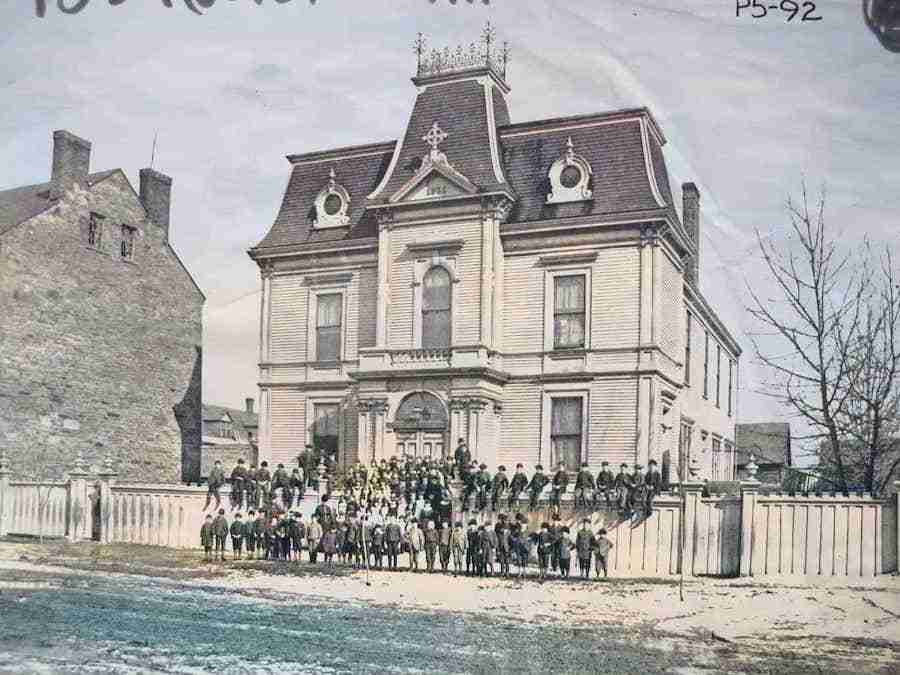 Click on a thumbnail to see more pictures of St. Dunstans Church.