The Anglican Parish of Portland has a rich history that dates back to a time that predates any church building. The first recorded services were held on July 2, 1769, led by the Rev. Thomas Wood, a Society for the Propagation of the Gospel missionary. Little is known about the life of the Church at Portland Point except that services were being held in rooms and stores.

In 1828 a contract was issued to build Grace Church at the corner of Simonds and High Streets in Saint John. Grace Church opened on Sunday, August 16, 1829 and was consecrated on September 15, 1835. The Parish was incorporated in the House of Assembly in 1836. The growing congregation soon outgrew Grace Church.

The first St. Luke’s Church was built on the present site in 1838, with the first services held on Sunday morning, December 23. This building was built by voluntary contributions at a cost of more than two thousand pounds. 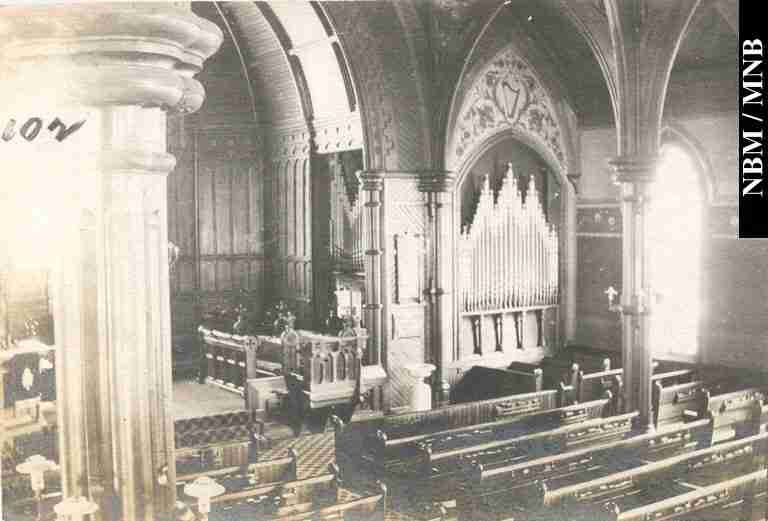 On May 28, 1875 the structure was consumed by a fire that started in the back of Kelties Brewery, the site of the recently closed Scotiabank building.

The Nave was completed and was first used on Sunday, August 29, 1880. Men who were skilled in the building of wooden ships build the building.

The beautiful stained glass windows were mostly installed in the early 1900’s and were restored in the early 1960’s. The tall spire was removed in 1949 due to safety concerns and replaced with the present tower.

The exterior of the church building had major restoration work done in 1986. In 2000 – 2002 all the windows in the hall, the kitchen, the offices and guild room were replaced.

The Parish of Portland has had twelve rectors since its incorporation beginning with the Rev. Gilbert Lester Wiggins (1833 – 1836). The second rector, the Rev. William Harrison, was the rector throughout the entire existence of the first building (1836 – 1875). The Rev. Canon David Barrett is currently serving as the parish’s priest–in-charge while maintaining his full-time position as the Hospital Chaplain in Saint John.