St. Mary’s Departmental Store is a two-storey brick structure, completed in 1905, that occupies a large corner lot at the intersection of Bowlen and Cliffe streets in Fredericton.

Between June 1901 and April 1903 Charles and Sarah Thomas (who lived at 238 Waterloo Row—Somerville House) purchased property for their “grand department store” at the end of the Carleton Street bridge that joined north and south Fredericton. For many years it was known as “The Store At The End of The Bridge”.

St. Mary’s Departmental Store officially opened on 5 May, 1905. Not only was the building modern in every respect, but with more than half a dozen departments, this store promised to satisfy every consumer. For a cost of $6,000, the owners gained an impressive structure with large glass display windows on the two street sides of the building and two floors of spacious, stylish interior replete with an elevator, 12 feet high ceilings, and elegant countertops and display cases for a very wide selection of merchandise. Within a few years, customers used a free parcel delivery and a three-times per day shuttle service from Queen St. to St. Mary’s Ferry Landing. This building stood as a symbol of progress and prosperity for the former village of St. Mary’s. Mr. Thomas had conceived of a department store on a grand scale which would serve the residents of both St. Mary’s and Fredericton. Its location at the end of the Fredericton-St. Mary’s bridge ensured a healthy flow of consumer traffic. 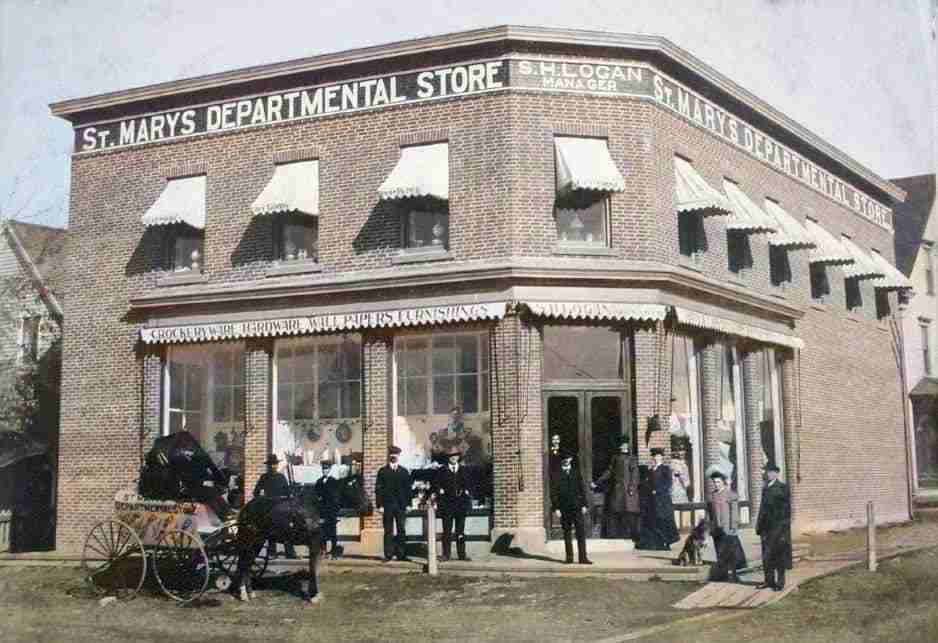 However, December 1909 saw the store’s closing. A new owner of the store operation, well-respected Fred S. Williams, carried on a similar business in the premises until May 1913.

In 1917, B. Franklin Smith leased the store area for his Florenceville-based produce business. With his wife Catherine, he purchased the whole building from the Thomas family and allowed various short-term rentals of areas in the building for local business people. From 1918 until 2000 the Bank of Commerce rented part of the ground floor.

In 1929 the building was sold to Saint John Valley Produce Exchange Limited. The second floor was rented to the Masonic Alexandria Lodge and the Devon Order of the Eastern Star. Royden E. Williams of Devon rented the rear area of the first floor for a small general store and personal living space. In 1935 it took $5,000 for the Masons to buy outright the whole building. After the bank vacated the premises in 2000, the Masons took over the ground floor area.

(This information came from Ted Jones’s research on this store. See also his article: Remembering the store at the end of the bridge. Daily Gleaner, December 4, 2004. p. B2.)