In 1895, mineral waters were discovered on Church Avenue by S. H. White. White formed a partnership with G. Armstrong and started the Sussex Mineral Springs Company. Sales improved when carbonation, sugar and flavourings were added to the water.

Here’s how Sussex Golden Ginger Ale began… Bill Manzer ran a general store in South Devon. After a couple years the Manzers rented the store out to Vernon D. W. Rogers of Fredericton, who partnered with a chemist from Woodstock to form the R & M Beverage Company.

Eventually Mr. Rogers became the only owner and chemist of the company until he formed a new partnership with Leo John Green also of Fredericton.

Their beverage or ‘pop,’ was well received by the public and deliveries were made throughout the countryside. When the business out grew this building, the company moved to 467 Union Street in North Devon and became known as Devon-Kist Beverages.

Vern Rogers sold the formulas to the Sussex Beverage Company who promoted the Lime Rickey, Orange Crush, Cream Soda and Golden Ginger Ale brands, which Rogers had made popular in Central New Brunswick.

Dry ginger ale was developed during prohibition when ginger ale was used as a mixer for alcoholic beverages which made the stronger flavour of the golden variety undesirable. Dry ginger ale quickly became more popular than golden, and today golden ginger ales like Sussex are an uncommon and usually a regional drink.

People who visit the Maritimes often bring Sussex Ginger Ale back home for friends and relatives who have connections to the Maritime Provinces. 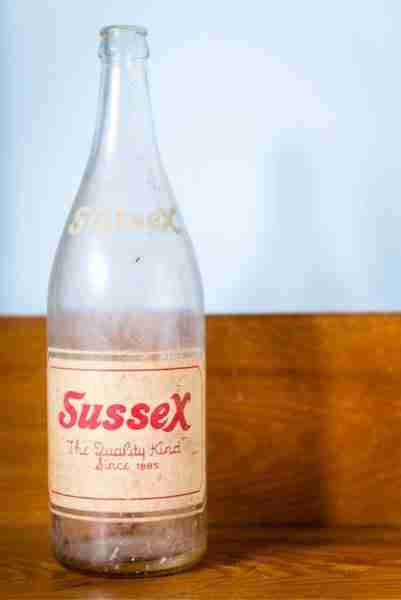 In 1910, the company built this building on Pleasant Avenue to house the business. It is now an apartment building.

In 1911, J. Howard Pearn and G. Percy Bolton formed P & B, a bottling company that was in direct competition with Sussex Mineral Springs Company.

In 1930, renovations took place at this building to double the capacity from 5000 bottles a day to 10,000 bottles. Sussex Golden Ginger Ale, which is darker in colour and more strongly flavoured than dry ginger ale, is still produced today.