The Town of Sussex straddles the Kennebecasis River, 70 km (43 mi) northeast of Saint John. It was originally settled by United Empire Loyalists moving up the St. John River Valley. The Town was named in honour of the Duke Of Sussex, son of King George III. The area was settled by a few families before the arrival of the United Empire Loyalists in 1784 from New Jersey. As the settlement of the Loyalists developed, the Parish Of Sussex was established in 1786. Sussex is a major dairy products producer in the province. It is home to Atlantic Canada’s largest hot air balloon festival.

In 1857 the European and North American Railway was opened, connecting the farming communities of the Kennebecasis River valley with Saint John and Moncton. Sussex was incorporated in 1895 but was only officially established as a town on April 29, 1903. The settlers were for the most part British Loyalists who had fled the American Revolution in 1776, with many Irish refugees of the potato famine from the mid-19th century settling in the nearby farming communities.

In 1885, the Sussex Military Camp was established on the eastern edge of the town.

The facility was closed following the Second World War and the town purchased the land to expand the municipal boundaries.

Today the agricultural exhibition and some areas remain as open land on the former site of Camp Sussex.

Sussex underwent several changes in the post-war period. In the early 1960s, several local roads were upgraded as part of the Trans-Canada Highway project which saw Route 2 pass immediately north of the town between Fredericton and Moncton. At the same time, a series of local roads in the Kennebecasis River valley were designated as Route 1, running from an interchange with the Trans-Canada at Sussex, southwest to Saint John.

The creation of Sussex as a highway interchange in this post-war period led to some transportation planners in New Brunswick calling for the consolidation or closure of the Fredericton, Saint John, and Moncton airports to be replaced by a single airport located in Sussex to serve all three population centres of southern New Brunswick; this being in the late 1950s/early 1960s before these facilities underwent considerable expansion. Sussex is still considered the best strategically located town, being in the center of what has been called New Brunswick’s “Golden Triangle”.

Potash was subsequently discovered in large quantities in the area surrounding Sussex, with the deposit being the second largest in the world after an area in Saskatchewan. Three mines were built near the town, two at Penobsquis, 8 km (5.0 mi) to the east, and another at Cassidy Lake (no longer operational), 10 km (6.2 mi) to the southwest. CN Rail built track to serve both mines, which employed hundreds from the surrounding area. Since 2003, natural gas has been produced from the McCully field near Sussex.

Sussex also began to see a growing tourism trade, with many flocking to see the collection of wood-constructed covered bridges throughout the central area of Kings County. As the heart of Kings County with its 16 covered bridges, Sussex is also known as the Covered Bridge Capital of Atlantic Canada. Eight of these wonderful wooden structures are within a ten-minute drive of town hall. In addition, an agricultural fair draws visitors each August (marking 113 years in 2008), as well as the establishment of southern New Brunswick’s only alpine ski hill in the Caledonia Mountains southeast of the town at Poley Mountain.

Twenty-six murals were created during the summers of 2006 and 2007, establishing its reputation as the Mural Capital of Atlantic Canada. There is also a very popular international hot air balloon festival in Sussex held every September, and Canada’s largest outdoor flea market each August.

The town entered economic difficulty during the late 1990s after the Cassidy Lake potash mine flooded, resulting in hundreds of lay-offs. Another significant blow came in October 2002 with a realignment of the Trans-Canada Highway (Route 2) between Fredericton and Moncton which no longer passed through Sussex, instead carrying the province’s east-west interprovincial traffic 30 km (19 mi) north of the town. At the same time, Route 1 was extended east on the old Trans-Canada alignment to an interchange at River Glade near Petitcodiac and Route 10 was extended on the old Trans-Canada from an interchange with the new Route 2 alignment at Young’s Cove Road south to Sussex.

Today, Sussex is primarily a regional service centre for the surrounding agricultural communities of the upper Kennebecasis River valley, as well as a highway service centre on Route 1, the primary highway between Moncton and Saint John, as well as being the most heavily travelled route in the Maritimes to the United States. Sussex is also home to Kingswood University (formerly Bethany Bible College), the only college in Canada owned by the Wesleyan Church.

The town is home to Sussex Golden Ginger Ale, a popular maritime beverage. 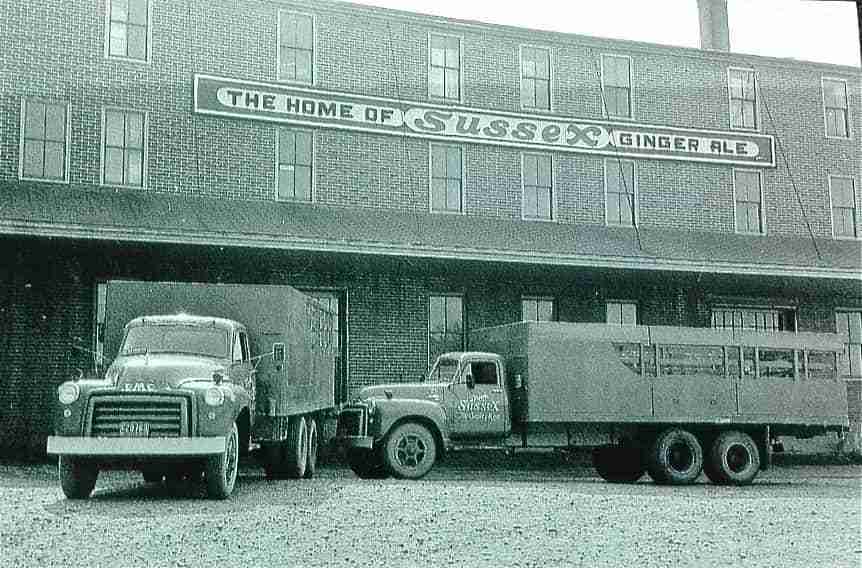 At one point, Sussex claimed to be the birthplace of the ice cream cone, though the Kings County Record recently proved this claim to be false. Sussex titles itself as the Dairy Capital of New Brunswick.

Her Majesty Queen Elizabeth II visited the town as part of her Golden Jubilee tour of Canada. On October 12, 2002, she attended the opening of a new wing of Sussex Elementary School, unveiling a commemorative plaque at the event. She then visited Princess Louise Park for an agricultural exhibition. While there, it was announced that the community hall would be renamed Jubilee Hall in her honour. Both appearances drew thousands of visitors from Sussex and beyond.

Click on a thumbnail to see more photos of Sussex and area.

One thought on “Sussex”