Tappan Adney (artist, writer, and consultant on Maliseet culture) is most remembered for his part in the preservation of the art of birch bark canoes. This skill he learned over a lifetime of travelling and living in Woodstock.

Born 13 July 1868 in Athens, Ohio, to parents Ruth (Shaw) Tappan Adney and college professor H.H. Adney, Tappan Adney was schooled by his father until he left home in 1883 to study art for three years with the Art Students League of New York.

Shortly after this, he and his sister went on a summer vacation to New Brunswick, travelling by boat up the Saint John River. Adney decided to stay in New Brunswick instead of returning home to the US for university. While in Woodstock, he became captivated by the life of Peter Joe, who lived in a native camp near the town. Under the guidance of the Malecite builder,” Adney made his first canoe at the age of twenty, and over the course of their friendship, Adney gained many skills and became a fluent speaker of the Maliseet language.

The lifestyle of the Maliseet so interested Adney that “he turned towards a career of an artist-craftsman,” using his education to share his experiences with American audiences. At the turn of the twentieth-century, several of his articles, including “How an Indian Birch Bark Canoe is Made” and “Some New Brunswick Traps,” were circulated in Harper’s and The London Chronicle. He also published “Milicete Indian Natural History” at this time with the Linnaean Society. Later, he was sent to Nome, Alaska, as a correspondent for Collier’s Magazine, and he soon after received a contract from Harper’s to publish his first book, The Klondike Stampede.

In addition to being a literary enthusiast, Tappan Adney was an accomplished artist. His drawings of birch bark canoes and descriptions of their design were used in Howard Chappelle’s 1964 compilation, The Bark Canoes and Skin Boats of North America. Tappan Adney is widely credited with saving the birch bark canoe from oblivion. Today he is best known for his canoe book and its companion collection of 110 one-fifth scale model bark canoes, documenting all major tribal types in North America and worldwide. 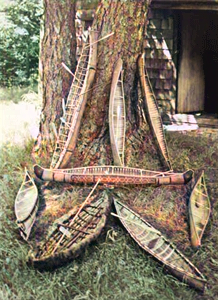 In 1899, Adney married Minnie Bell Sharp of Woodstock, who gave birth to their only child in 1902, a son named Francis Glenn Adney.

From 1901 to 1906, Adney pursued business interests in New York City, but by 1907, he was back in New Brunswick promoting the Sharp orchard business in Woodstock.

In 1908, he became a Canadian citizen and moved his family to Montreal, where he worked as a painter and illustrator. During the war years, he lived in Ontario, serving under the Canadian Engineers. He joined the Canadian Army as a lieutenant of engineers and was assigned to the Royal Military College.

After his service in the First World War, Tappan Adney returned to Montreal and became an honorary consultant on Indian lore for the McCord Museum at McGill University. It was during this period (1920-33) that he began to assemble an extensive and fully detailed catalogue of canoes. This work put him in touch with Hudson’s Bay Company contacts, government agents on Indian reserves, and aboriginal groups. However, financial hardship forced the Adneys to return to Woodstock in the 1930s. 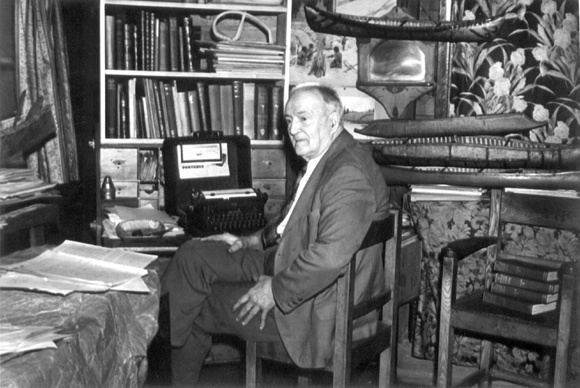 In 1937, his wife, Minnie Bell, died. Following her death, Adney remained in Upper Woodstock to continue his research on canoes and the Maliseet language.

The record Adney made of his first experiences in New Brunswick has been edited by Ted Behne in “The Travel Journals of Tappan Adney: 1887–1890”. Adney’s writings illustrate his fascination with the life of those he encountered and his total immersion in Maliseet culture. 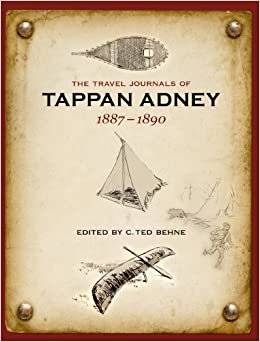 The close relationship Adney shared with Peter Joe served as his introduction to traditional ways of life that were falling out of use by the First Nations. Adney’s journals consist of many cultural experiences vital to the Maliseet way of life: accounts of canoe trips and hunting trips, sketches and diagrams of the parts for various tools and equipment, and documented events which happened to him and to others. Adney’s record of experiences is important when one considers John McPhee’s observation that in Adney’s lifetime, the number of birch bark canoes declined from the 1000’s to a scattered vestigial few. Adney made his life’s work an extensive catalogue of the First Nations culture surrounding him. Because of this project, he is regarded as one of the foremost experts on Maliseet culture.

Furthermore, Adney’s research on Maliseet dialects and natural history contributed to the study of the origins of human language. In his field research, he related the sounds of animals to elements of Maliseet language and described similarities between the two. Based on this comparison, he projected broader theories about the relationship between human thought and nature. As Behne observed, “he used food, as well as sounds the animals themselves make—much like some vocalizations of the Maliseet language—to literally charm birds and squirrels out of the trees to eat from his hands and perch on his shoulders”. Adney was in contact with many professional scholars who held similar views, but he remained separate from the official academic community. And despite his extensive knowledge of the formal construction of the Maliseet language, “nothing he wrote on linguistics was ever published in a professional linguistic journal for peer-review,” nor was the importance of his work formally recognized during his lifetime.

In later life, Adney played an integral role as liaison between the Maliseet people and the Canadian government. In this work, he has been described by many as an intellectual giant. In his 1946 defense of Dr. Peter Paul, who was arrested for theft of natural resources, Adney was the first person to use pre-established treaty rights in the defense of an aboriginal person in a Canadian court. After passionately defending the rights of the Tobique First Nation to their traditional lands, Adney wrote to Mrs. Lilian Maxwell, “I have had the old tribe reconstituted so they cannot say, ‘That old tribe of British times does not exist any longer.’ The Indians can say, ‘Yes, it does’”.

Tappan Adney’s collection of work—including his models, papers, and artistic portfolios—are housed at various museums, archives, and academic institutions. These include the Smithsonian, the University of New Brunswick, Dartmouth College Library, the Carleton County Historical Society, the York-Sunbury Historical Society, and the Pennsylvania State Archives. Over one hundred and twenty of Adney’s canoe models are housed at the Mariners’ Museum in Newport News, Virginia, and his papers on Maliseet language reside at the Peabody Essex Museum in Salem, Massachusetts. In addition, Adney donated part of his collection of Indian artifacts and his papers concerning the Sharp family to the New Brunswick Museum in Saint John.