We saw these two beautiful Bald Eagles in a tree on the Green in downtown Fredericton February 28th, 2015. A few folks were also taking photos of them and told us the day before, the eagles had a young one with them.

The bald eagle, with its snowy-feathered (not bald) head and white tail, yet the bird was nearly wiped out in the US. For many decades, bald eagles were hunted for sport and for the “protection” of fishing grounds. Pesticides like DDT also wreaked havoc on eagles and other birds. These chemicals collect in fish, which make up most of the eagle’s diet. They weaken the bird’s eggshells and severely limited their ability to reproduce. Since DDT use was heavily restricted in 1972, eagle numbers have rebounded significantly and have been aided by reintroduction programs. The result is a wildlife success story—the U.S. Fish and Wildlife Service has upgraded the birds from endangered to least concern. 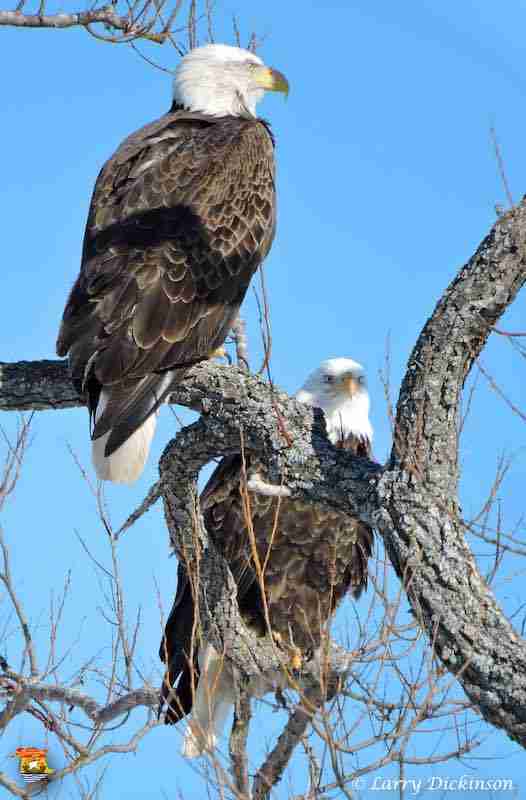 Though their numbers have grown in much of their range, bald eagles remain most abundant in Alaska and Canada. These powerful birds of prey use their talons to fish, but they get many of their meals by scavenging carrion or stealing the kills of other animals.

Bald eagles are believed to mate for life. A pair constructs an enormous stick nest—one of the bird-world’s biggest—high above the ground and tends to a pair of eggs each year. Immature eagles are dark, and until they are about five years old, they lack the distinctive white markings that make their parents so easy to identify. Young eagles roam great distances.