Over one hundred years have passed since David and Wallace Gibson deeded a parcel of land to James Rankin Sr., James Rankin Jr., David Gibson, George Trafton and Alexander Kearney, Trustees of Saint James Church, in connection with the Church of Scotland in the Parish of Northampton. This church was also called “Greenbank Parish Church” and the “Kirk.”

Most residents of Carleton County have noticed and admired this pretty church, situated seven miles below Woodstock on the eastern side of the river, near Gibson Creek. 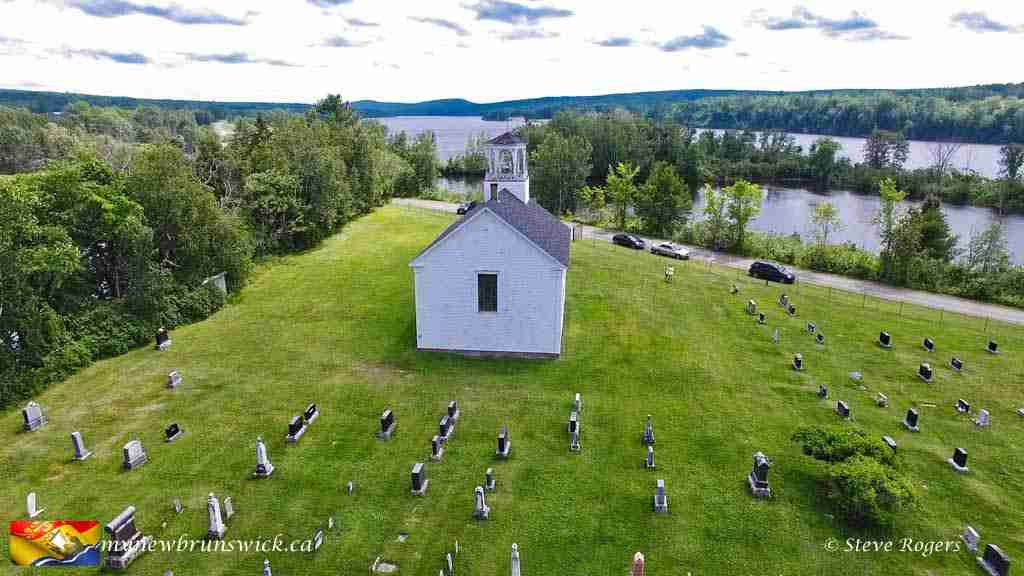 Nestled in a quiet location along the flowing Saint John River, the church has witnessed the birth and death of its congregation, and in the interim love, fellowship and even a murder.

In 1854 the Rev. Peter Keay was sent out by the Colonial Committee of the Church of Scotland and immediately took over the pastoral oversight of Woodstock, to which Northampton was added. He toiled with diligence and success for only a short period.

It is believed that this church was built sometime between 1856 and 1857. A portion of the description in the deed reads, “Thence along the line of the graveyard eight rods to the place of beginning,” so we know that, as in many early communities, the graveyard was there before the church was built. We have been told that the part of the cemetery that contains the Rankin plot was originally part of the Rankin grant.

In 1856 the Rev. David Stott was there for a period of two years.

In the year 1858 the Rev. J. H. McLardy of New Brunswick, having completed his studies in Scotland, was sent back to New Brunswick as an ordained Missionary until 1862, when he accepted a call and remained in Woodstock until 1866. He was followed by Rev. W. T. Wilkins. He was ordained and inducted on November 6th, 1866, and remained three years.

After a vacancy of two years the pulpit was supplied in 1871 by the Rev. William Begg. During this time he received a call for the Woodstock and Northampton parish, signed by seventy subscribers. He was ordained and inducted on June 12th, 1872.

From 1872 to 1890 I have found no record of a pastor. At this time, and in later years between pastors, missionaries of different denominations would fill in. From 1893 to 1896 Rev. W. H. Sparge was pastor and he was followed by the Rev. James Crisp in 1899. In 1902 Rev. John C. Berrie assumed the pastorate. In 1906 Rev. E. C. Turner was stationed on the circuit and Mr. H. W. Rogers became the Recording Steward, which post he held until Northampton became part of its present circuit in 1930.

After the Union of the three churches in 1925, Rev. George Sellars came to the circuit and, at the close of his pastorate in 1930, Northampton was transferred from the Jacksonville circuit to become part of the present Hartland-Northampton pastoral charge, with Rev. D. L. Giddings minister of the congregation. He remained for the longest period of service, leaving in 1938, when he was called to Sheffield, N. B.

St. James is a small one room church which originally had an unusual mosque-like bell tower in which hung a bell that was sent out from Scotland. Upon entering this church through the doorway with its high long panelled door, the visitor would notice that the interior was almost unchanged since it was built. There were two tall, cylindrical, three-tiered stoves made by Connell Bros. of Woodstock, with stove pipes extending the full length of the church over the heads of the congregation. Each pipe ran to an old metal drum heater 10 ft. from the floor and attached to the chimney.

The interior of this building is about 45 feet long and 35 feet wide, and there are three sections of pews. These are the original pews. They are very straight-backed, made of golden oak, and would seat about 100 people. In the old days, apparently women sat on the right side of the church, the men on the left, and usually the center section was occupied by the whole families. There are also choir seats at right angles to the congregation, on both sides of the pulpit, which would seat about 24 singers.

The pulpit is on a platform which has a carpet on it. This is a replacement for the original high pulpit which is now in the vestry of the Presbyterian Church in Woodstock. Behind the pulpit are three hand-made straight-backed chairs, the middle one being an armchair. A little octagonal table sits in front of the middle pew for collection plates.

To the right of the pulpit stands the organ, and some of my older informants remember their parents speaking about the arguments that arose when the organ was first installed. As you know, for many years vocal music was the only kind of music allowed in Presbyterian churches. This is an old reed organ, the bellows of which are filled with air by foot pumps. It was made by the Thomas Organ and Piano Company, of Woodstock, Ontario.

In the wall over the pulpit is a memorial window of stained glass. A Bible and Cross are depicted in the center. On the left is the inscription: “In Memoriam — Pioneers and Builders of a Nation,” and on the right: “In Memoriam — Servants of God and the Church.” There are 8 big windows in the church, 3 on each side and one on either side of the door. These originally had small panes, 12 over 12, and above the many-paned windows were gothic louvred sections which served either for ventilation or for trim.

Suspended from the ceiling over the middle section of pews were 3 large coal oil lamps with shades. The shades were white and decorated with painted flowers. One of them was different, and during my research I learned why. Mr. Donald Gibson told me that when he was a boy, he and another lad were going to light the lamps, and when he pulled the lamp down, he didn’t pull it far enough; when the other boy reached up to light the lamp, the shade was knocked off and broken, much to their dismay.

In the very early days, candles were undoubtedly used, and among the items on display was a very interesting and unusual brass candle holder found in the church by Mr. Harrison Rogers. On the base is inscribed the name “R. Best,” and the number “1316.” The first lamps to be used in the church were 6 coal oil lamps set in brackets attached to the window frames. Three of these lamps are still in the church. 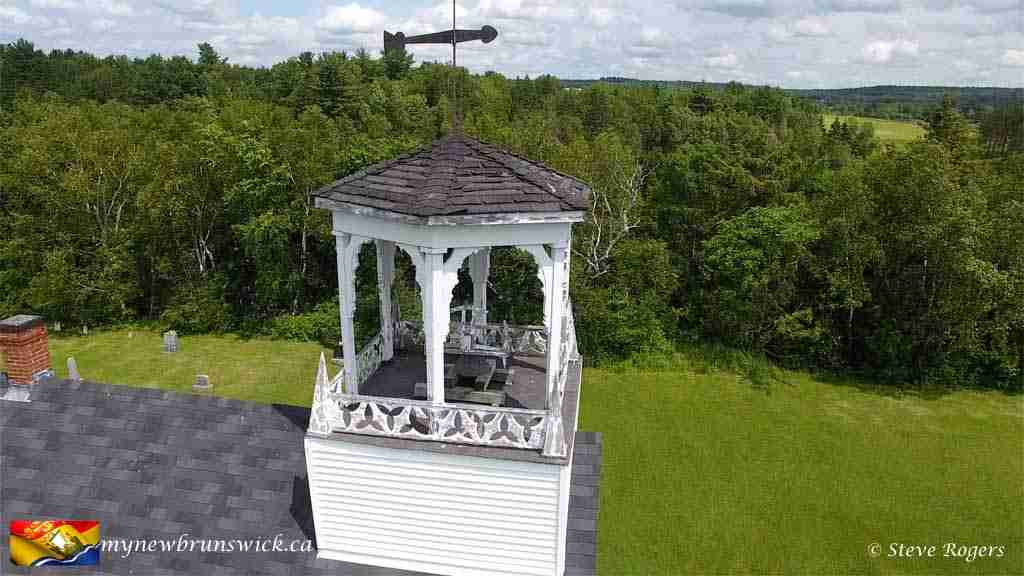 According to the old newspapers in the Library at Woodstock, the Northampton congregation was very active from the beginning. The Carleton Sentinel of July 4th, 1857, carried an item which reads as follows: “Collections at Woodstock and Northampton on Sunday last were as follows: Woodstock for Synod and Home Mission Fund, 1 pound, 9 shillings. Northampton, for same, 1 pound 3 shillings and sixpence. Northampton is going forward in other matters. A library in connection with the Presbyterian Sabbath School has been liberally and promptly subscribed for which, if well selected (a consideration to be carefully attended to in all cases) will be of common benefit to the neighbourhood.”

There is a great deal more for us to learn about Greenbank Church, but in talking to former members of the congregation, and reading about it in the old newspapers, I realized how important it was to the people of Northampton. There were stories of them coming to church in their wagons and hitching their horses to the rail outside. The children would be scrubbed and starched for Sabbath School, and for those who loved music, there was the Singing School presided over by Professor Trembley, or some of his predecessors. The church was not only the center for the serious thoughts of the Sabbath Day, but for summer picnics and bean-hole bean suppers, which provided social pleasure and also raised money for good works.

I was told how, when there was no regular pastor, the travelling ministers or missionaries might arrive on the scene without advance notice. Of course they would expect to be put up by one of the families and their horses stabled and fed.

When there was a death in the community in the summertime, the coffin was placed on one of the two-seater wagons, with the second seat removed, for the procession to the graveyard. And in the winter it would be carried on a long sled over roads built up with hard-packed fallen snow.

I mentioned earlier that there was a murder at Greenbank. It was on a cold winter night in 1865, following Singing School practice in the Kirk. Two young men, whose families, the Orrs and the Kearnerys, had been feuding for years, fought near a snowdrift under a tall tree in the churchyard, and one of them fell, fatally wounded by a knife. It is said that on the place where young Orr’s blood spilled, no grass has grown since. The trial of Kearney for murder was held at the Old Court House at Upper Woodstock, with L. P. Fisher for the defence. It was determined that Orr had been the attacker and that Kearney had acted in self-defence. The story of the trial is material for a paper in itself.

For information about the church, I am very grateful to Mr. and Mrs. Donald Gibson, Mr. Clifford K. Rogers, Mr. LaFayette Rogers, Mr. Harrison Rogers, and the Rev. H. G. MacKenzie. The latter, following Rev. J. Leadbeater, preached at the Kirk every second Sunday afternoon for 3 summers, from 1959 until 1962. The services were discontinued because during that time there were 15 deaths, which nearly wiped out the congregation.

I learned from Mrs. George Gibson, whose husband was the great grandson of Robert Gibson, father of the David and Wallace Gibson mentioned in the deed, that Robert was born in Scotland in 1768. His second wife was a member of the aristocracy, Lady Janet Cameron, and he brought her to New Brunswick. They had 13 children. The land on which the church stands is part of his original grant.

A history of the Presbyterian Church in Northampton, The KIRK, was written by Mrs. Bruce (Jaunita) Smith.

One thought on “The Kirk Church – Northampton”