The “Paris Crew” of Saint John is known as Canada’s First World Champions. They won at the International Rowing Regatta in Paris in 1867 — only days after Confederation. These so-called underdogs beat out famed crews from Germany, France and England. The achievements of Elijah Ross, Samuel Hutton, Robert Fulton and George Price inspired future generations of rowers and instilled pride in New Brunswickers and Canadians.

Just imagine yourself standing on the banks of the Saint John Harbour in the mid 19th century. The city is buzzing and the harbour is equally busy with water-based industry, ships of all sizes and shape pulling in and out of the harbour, and residents and tourists taking in the scenes of this picturesque port city.

Near the river’s mouth the waters are turbulent as the highest tides in the world cause the river to reverse its flow twice a day in a narrow gorge called the Reversing Falls. You also notice that the oarsmans working the waters are very rugged and strong, with such prowess on the water. Layer on the fact that brewing rivalries and wagering are motivating rowers to go faster and faster on their quest for bragging rights over their fellow oarsmen. Would they be the best competitive rowers in the world?

For several consecutive years the rowing teams from a hamlet within Saint John, known as Indiantown, were considered the best. Rivalries between the rowing crews, from a neighbouring hamlet called the Carleton area, lead them to construct a team of the strongest and best rowers to end the Indiantown dynasty. In the summer of 1866, at a rowing regatta dubbed “Father Dunphy’s Picnic” the Carleton Crew’s final recruit, Robert Price, joined forces with Samuel Hutton, Elijah Ross, and Robert Fulton to win a hotly contested race. Finally the Carleton Crew had conquered their arch rivals and in doing so scored a measure of revenge. It was this win that would solidify the Carleton Crew’s chances of becoming World Champions at an upcoming Rowing Regatta in Paris, France.

Why Paris? In 1864, Emperor Napoleon III decrees that an international exposition will be held in Paris, France marking the culmination of the Second French Empire. This exciting event will be a rowing regatta and would be held as part of the festivities. Rowers from around the world are invited to compete in the International Rowing Regatta of 1867.

Word from Paris made it’s way across the ocean and was announced in the local newspaper, “An international regatta on a magnificent scale will take place in Paris during the French Exhibition.” (Saint John Globe, January 1, 1867)

The article criticized the provincial government for not committing to send a New Brunswick contingent and challenged the citizens of Saint John to, at minimum, secure a representation at the regatta.

Within a couple weeks, the Mayor of Saint John invited all those interested in seeing New Brunswick represented at the regatta to attend a private meeting in his office.

“Here is an opportunity that may never again occur to place St. John prominently before the world: therefore let all who take a pride in their country and its peerless oarsmen go to the Mayor’s office at 8 o’clock tomorrow, to encourage and assist the work in hand.” (Saint John Globe, February 21, 1867)

The excitement surrounding the event led the citizens of Saint John to raise over $4,000.00 to enter a team and eventually pressured the provincial government to contribute an additional $2,500.00. Sheriff J. A. Harding, who was both an enthusiastic sportsman and respected city official, was appointed as the team’s representative. Despite the financial contribution from the province, they chose to send “no elaborate works of art, no specimen of ingenious handicraft at the exposition.”

As often is the case in sport and life, timing is everything, and for the Carleton Crew they were the easy choice. The team would be Paris bound!

Just getting the team and their rowing sculls to Paris would be a feat in itself. The two four-man rowing sculls were massive, measuring 34 and 36 feet in length – that’s almost the same length as a school bus.

After a great deal of preparations, the team’s journey to Paris started on May 27, 1867. “There was a large crowd of persons at the wharf to see them off, and to give them a hearty cheer.” (Saint John Globe, May 27, 1867)

The team first travelled by steamship out of the Bay of Fundy and along the New England coastline and finally arriving in New York. They then made their Transatlantic journey to Southampton, England on a steamer vessel called the “Atlantic”.

Over the course of five weeks the team had traveled across the ocean and trained in Southampton, England. Where they would exercise and prepare for their races at the International Rowing Regatta in Paris, France.

Letters from Sheriff J. A. Harding described that several experts had visited the team while training in Southampton, England and they did not speak very encouragingly.

The regatta was a display of aquatic feats to honour the International Exposition. The races were held on the broad waters of the Seine River, between the bridges of St. Cloud and Surennes, offering lots of viewing area for the intrigued spectators.

Over the course of two days, July 7-8, 1867, two classes were held. The first for amateurs without distinction and the second for countries who held varying levels of competition.

Just imagine how nervous these young men from Saint John were as they lined up against the best amateur oarsmen from around the world. Being the only crew from North America, the crew from Saint John were simply called the “New Brunswickers”. They were to race crews from Paris, Liege, and Brighton and all were heavily favoured to beat the New Brunswickers. The gun sounded and the crews were off. The New Brunswickers reportedly didn’t have a chance; however they took an early lead, rowing some forty-six strokes per minute.

Their closest competitor was the hometown Parisian crew, the Geslings. With half the race distance travelled, the French crew made their move to advance. However, the determined effort of the Geslings was matched by the New Brunswickers and it was them who won the race and were rewarded with thunderous applause. 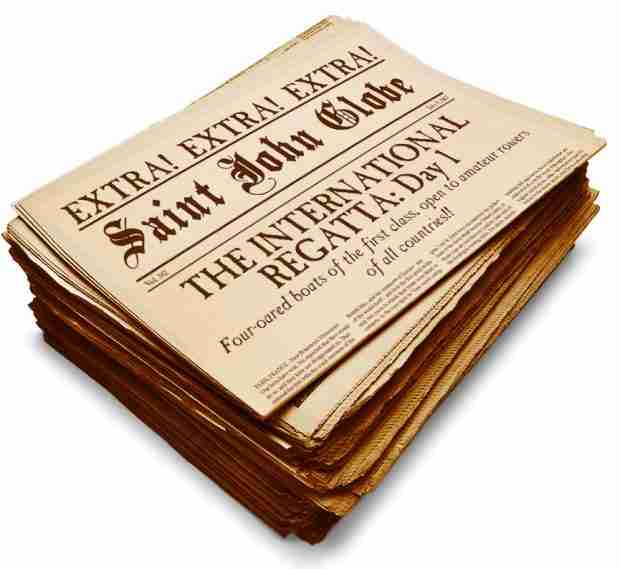 Instantly, as word of the Carleton Crew’s stunning victories reached the shores of Saint John, the city erupted in celebrations. The team’s victories occurred just one week after Canada’s Confederation and as result they will forever be known as Canada’s First World Champions.

The whole province of New Brunswick, and much of Canada, rejoiced as the first victory in international competition was seen as a good omen for all of Canada.

The official celebrations would need to wait for nearly a month as the team made their way home from Paris. On August 6, a steamer carrying the team arrived in Saint John, and news of their arrival spread like wild fire and soon thousands of onlookers cheered and gave the Carleton Crew a hero’s welcome.