Who invented the toilet? Thomas Crapper? While that makes for a nice, tidy, humorous answer, it is not true.  He did not invent the toilet.

He did, however, do much to increase the popularity of the toilet, and developed some important related inventions to it.  He was noted for the quality of his products and received several royal warrants to deliver goods and products to the British Royal Family. 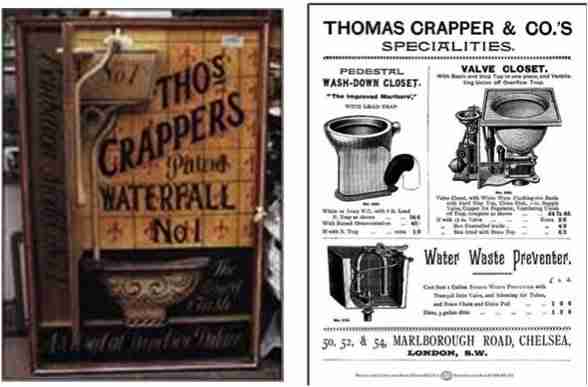 In the late 1850’s the company he founded Thomas Crapper & Company, owned the world’s first bath, toilet and sink showroom, and is still in business to this day.  So while he did not invent the toilet, it is generally assumed that the word ‘crapper’, meaning the toilet, finds its origins in his name.

Enough with Crapper and the ‘crapper’; now back to who invented it.

Actually, there is no known single inventor or individual invention of what we now know as the toilet, and all of its many synonyms.  What we do have is a generally known and accepted historical timeline listing milestones along the way of the evolution of the toilet.

A Toilet Timeline:
• circa 26th century BC: Flush toilets were first used in the Indus Valley Civilization.  In a few cities it was discovered that a flush toilet was in almost every house, attached to a sophisticated sewage system.
• King Minos of Crete had the first flushing water closet recorded in history, over 2800 years ago.
• A toilet was discovered in the tomb of a Chinese king of the Western Han Dynasty that dates back to 206 BC to 24 AD.
• The ancient Romans had a system of sewers. They built simple outhouses or latrines directly over the running waters of the sewers that poured into the Tiber River.
• 1206: The Arabian or Persian inventor Al-Jazari invented a hand washing device incorporating the flush mechanism now used in modern flush toilets. His device featured a mechanism for filling the basin with water. When the user pulls the lever, the water drains and the mechanism refills the basin.

• Chamber pots were used during the Middle Ages. A chamber pot is a metal or ceramic bowl that was used for relieving oneself and then the contents were disposed of (often out the window).
• In 1596, a flush toilet was invented and built for Britain’s Queen Elizabeth I by her Godson, Sir John Harrington.  It is said that she refused to use it because it was too noisy.
• The first patent for the flushing toilet was issued to Alexander Cummings in 1775.
• 1777: Samuel Prosser invented and patented the ‘plunger closet’.
• Joseph Bramah of Yorkshire patented the first practical water closet in England in 1778.
• During the 1800s, people realized that poor sanitary conditions caused diseases. Having toilets and sewer systems that could control human waste became a priority to lawmakers, medical experts, inventors, and the general public.
• In 1829, the Tremont Hotel in Boston became the first hotel to have indoor plumbing; it had eight water closets built by Isaiah Rogers. Until 1840, indoor plumbing could be found only in the homes of the rich and in better hotels.

• 1851: The first popularized public water closets were exhibited at The Crystal Palace in London and these were considered the first public toilets. They had attendants dressed in white and customers were charged a penny for use.
• Britain’s George Jennings in 1852 also took out a patent for the flush-out toilet.
• 1857: The first American patent for a toilet, the ‘plunger closet’, was granted.
• 1858: The first flush toilets on the European continent may have been installed in Christiania (now Oslo), Norway.  The toilets were probably imported from Britain, as they were referred to by the English term “water closets”.
• 1859: By the end of the 1850’s building codes suggested that most new middle-class homes in British cities were equipped with a water closet.
• 1860: Another early water closet on the European continent was also imported from Britain. It was installed in the rooms of Queen Victoria in Ehrenburg Palace (Coburg, Germany).  She was the only one who was allowed to use it.
• 1880’s: Thomas Crapper’s plumbing company built flush toilets of Albert Giblin’s design. Although not the original inventor, Crapper popularized the siphon system for emptying the tank, replacing the earlier floating valve system which tended to leak. Some of Crapper’s designs were made by Thomas Twyford.
• 1885: The first modern pedestal ‘flush-down’ toilet was demonstrated by Frederick Humpherson of the Beaufort Works, Chelsea, England.
• 1885: British pottery manufacturer Thomas Twyford built the first one-piece ceramic toilet using the flush-out siphon design by J. G. Jennings.
• 1898: Giblin received a British patent for the “Silent Valveless Water Waste Preventer”, a siphon discharge system.
• 1906: William Elvis Sloan invented the Flushometer, which used pressurized water directly from the water supply line for faster recycle time between flushes. The Flushometer is still in use today in public restrooms worldwide.
• 1907: Thomas MacAvity Stewart of Saint John patented the vortex-flushing toilet bowl, which creates a self-cleansing effect.

• Beginning in 1910, toilet designs started changing away from the elevated water tank into the modern toilet with a tank coupled to the bowl.
• 1911: Philip Haas of Dayton, Ohio, developed and received a patent for the flush rim toilet, which depended on multiple jets of water from a ring with downward-pointing perforations to thoroughly wash every portion of the bowl.
• 1924-1927: Haas also designed and improved a water closet flushing and recycling mechanism similar to those in use today.
• 1980: Bruce Thompson, working for Caroma bathroom products of Australia, developed the Duoset commode tank with two buttons and two flush volumes as a water-saving measure. Modern versions of the Duoset are now available worldwide, and save the average household 67% of their normal water usage.
• 2006:  The NFL’s Calvin Johnson of the Detroit Lions (and at the time a student at Georgia Tech) developed a sophisticated waterless toilet to meet the sanitary needs of populations in South America who did not have access to clean water or sanitary plumbing.
• So there you have it.  Not one individual is known to history as the inventor of the toilet; many have made their contribution to the single most significant product which helps promote and protect good health for people the world over.