Dorchester is a historic village, and a living municipality.  It was a booming economic centre in the late-19th century, as is still in evidence from the some of the beautiful homes and other buildings in the area. Trinity Anglican Church was designated as a Canadian Historic Place for its association with the Anglican Church, for its association with several of Dorchester’s eminent families, for its architecture and for its stained glass windows.

Trinity Anglican Church is also recognized for its association with several of Dorchester’s eminent families. Parishioners Keillor, Chandler, Botsford, Smith, Palmer, Gilbert, Weldon, Hannington, Teed, Hickman, Oulton and Chapman were amongst the most influential and prosperous early families in Dorchester. They dominated community affairs, politics and business in Dorchester and had interests throughout Westmorland County. These families were mostly descendants of emigrants from Yorkshire, England or descendants of United Empire Loyalists. The Sir Albert Smith Memorial Pulpit and the Lady Smith Memorial Tablet recognize these eminent benefactors of the Church. Other tablets are dedicated to Judge William Botsford Chandler and to Robert Godfrey.

Trinity Anglican Church was built in 1840 and consecrated August 21, 1843 by John Inglis, Lord Bishop of Nova Scotia. The entry in Bishop Inglis’ diary for the day reads, “A very neat church was consecrated and named Trinity.”  In 1846 the church ladies and the wife of Bishop Medley made the red hangings to commemorate the bishop’s visit to Trinity. The hangings are still in use today.

The first organ was brought from England in 1845 and the present organ was installed in 1870.  In 1959 the organ was overhauled by an organ builder from England.  The choir and organist from Saint George’s Church, Moncton, came to Trinity for the rededication service.  The chancel was enlarged in 1868, completely refitted in 1880 with a credence bracket, lectern, a new chancel carpet and a more appropriate Holy Table.   Also in 1880 the women’s guild donated funds to erect a stone fence and a new bell, placed for Christmas that year, from Baltimore.  The rector’s engineering son drafted the tower alterations and the parish men executed them.  The bell performed a dual role; it called people to worship and alerted the town of any fires. 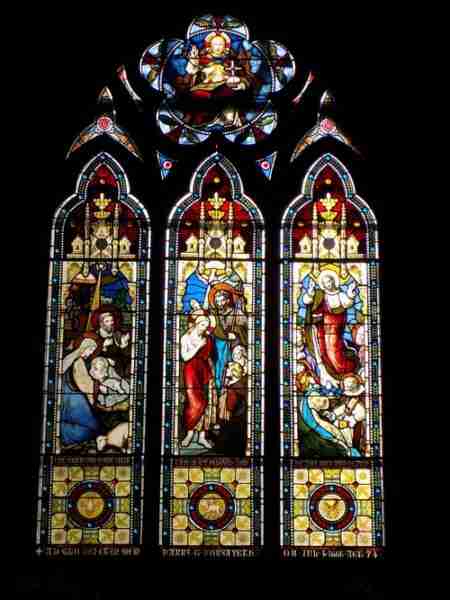 In 1887, twelve gothic windows were installed in the church.  The headings depict the Four Gospels with the cathedral glass coming from Montreal.  The frames were made in Oxford, Nova Scotia.  New pews of ash complimented the seating.  A new brass and oak pulpit honoured the memory of Sir Albert Smith and a window in the chancel was also given in memory of the six children of David and Lydia Chapman. David Chapman was warden of the parish church for twenty-one years.

The focal point of the church is the great east window, dedicated in 1888 in memory of Harriett Forsayeth, the mother-in-law of Joshua Chandler.  The window is comprised of three lights depicting the Birth, the Baptism and the Ascension of our Lord.  The Easter window on the right hand of the nave depicts St. Mary Magdalene meeting our Lord following the resurrection.  This window is in memory of George Wentworth Chandler and Kathleen Head, his wife.  In 2001 Trinity’s newest stained glass window was dedicated in memory of Frank and Mona Dobson and Celia Baird by Charles and Gaius Dobson.  The window depicts the angel Gabriel speaking with Mary, the mother of Jesus, at the Annunciation.

Our Lady of Lourdes Grotto – Saint-Louis-de-Kent